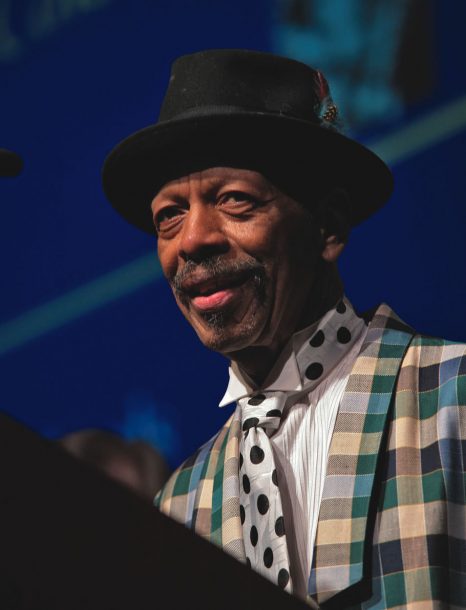 Ornette Coleman is the subject of debate, through a research paper presented at the conference, as well as praise, with a commission honoring his work.

Double takes might seem in order when the names Ornette Coleman and Walt Disney appear in the same sentence, let alone in close organizational cahoots. But there was Coleman, creating his instantly identifiable modernist magic in the architecturally phantasmagorical new Disney Concert Hall in downtown Los Angeles. In what was likely the city’s jazz highlight of the year, Coleman made a long-awaited return to the town that spawned his groundbreaking quartet in the late ’50s. His Disney Hall concert kicked off a jazz series in this home of the Los Angeles Philharmonic, designed by Frank Gehry, and opened to much international acclaim in October 2003.

The ostensibly odd coupling of Ornette and Disney kept nagging at listeners and observers, just as the blending of the Coleman’s polymorphous “harmolodics” style and the right-angle quashing interior of the house that Gehry built seemed ideally matched. Both names are indisputably important American cultural icons: the great American iconoclast Ornette stands for stretched boundaries and inventive vocabularies, while Disney has been synonymous with culture of moral standing and assuring polish.

Naturally, both those cursory descriptions are misleading. Coleman ‘s music, then and now, represents both a height of individuality and outsider vision–in the Ives-ian sense–as well as a beautifully rational, truthful, even folkloric, musical directness in its expression. His musical voice owes as much to folk and blues as it does to bebop or jazz in its most left-field permutations. The supposedly mild-mannered Disney behemoth, meanwhile, is responsible for this maverick architectural wonder and also the L.A.-based Cal Arts, one of the more avant-garde oriented art institutions in the country.

In the warm, marvelously spatial embrace of the Disney Hall, Coleman showed up with a quartet featuring his son Denardo Coleman on drums along with two acoustic bassists. Thankfully, the group is free of former bassist Charnett Moffett, whose silly quotations and misplaced hubris seemed antithetical to the band’s spirit. Instead, the ever-impressive Greg Cohen held down the bottom end, and his work in the plainly Ornette-ish John Zorn quartet Masada has prepared him well for the free-range, spidery bass role required here. Bassist Tom Falanga played mostly arco and in a high register, making him virtually a surrogate hornlike foil for Coleman, who generously supplied his seductive, eloquent slalom work on alto sax, with occasional side trips on trumpet and violin (on which he sounded unusually gutsy this evening).

As has also been the recent habit of Coleman–who, at 74, picks and chooses his gigs carefully–he arrived with a half dozen new songs. They follow familiar blueprints from his harmolodic manifesto–either fast folk-bop or slow songs with the sweet yet plaintive air, a style that he virtually invented. Heads sometimes came fast and furious, as portals to meandering, polyrhythmic improvisations or arriving later in a song, cueing abrupt, angular endings.

Closing the set was a tune opened by a fast, flurrying phrase building up steam, stopping twice, and launching headlong into a bustling rhythmic charge. But it was also the shortest piece of the set, a brain-opener and appetite-whetter on the way out.

Opening the evening was Charlie Haden’s current project, a lovely balladic collaboration with Gonzalo Rubalcaba, based on songs of Mexican composer Jose Sabre Marroquin. Given Haden’s seminal connection with Coleman, dating back to L.A. in the ’50s, it was a logical concert opener, but also a strange one. The band’s polish suggested the polar opposite of Coleman’s loose and probing aesthetic. At evening’s end, though, Haden rejoined his old ally for a ripe encore–a rumbling three-bass version of Coleman’s “Lonely Woman,” still one of the most bittersweet sad songs in anyone’s book.

It has been said that Ornette Coleman walks and talks softly but carries a big and healthily dangerous satchel of ideas. At the Disney, he came onstage in a light blue suit, with a fetching, feather-equipped chapeau and his gentle spirited demeanor belying the ferocity of his musical wares. In what has become, for him, a common pre-show disclaimer, he offered, “Good evening ladies and gentlemen. Thank you very much for coming tonight, and I hope you won’t be disappointed.” As if.