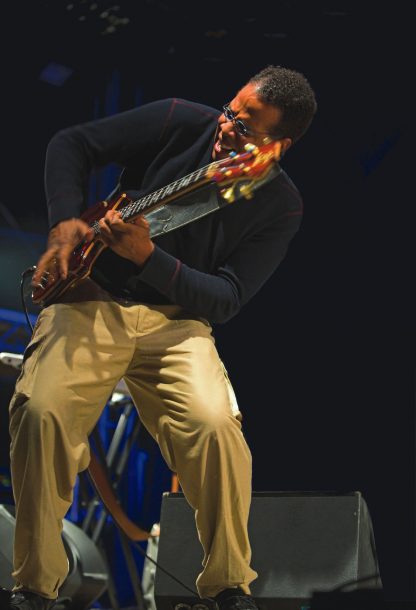 What would they play? Would they plug in? In my mind the notion of the tight, sold-out quarters of the Blue Note turning into a pressure cooker of fusion-era amplification had me enthralled — and scared. But when I spied an acoustic bass being held aloft and maneuvered toward the stage by a young man who looked curiously like a teenaged Stanley Clarke (turns out it was his son), I put the earplugs away and got ready.

I mean, come on! McCoy Tyner and Billy Cobham and a stand-up bass playing Stanley Clarke? When I first saw the gig mentioned in the Blue Note’s ad, it didn’t read like a usual weeklong residency in New York City. It read more like a one-time festival concert. It read like something that would meet for the first time on Tuesday and develop over the week — that I should make the Sunday show if I wanted to catch them full throttle. And it also read like history. Cobham had not played with Tyner — on stage or in studio — since the pianist’s 1976 soloists-and-strings album Fly With the Wind. Clarke, normally ensconced in Los Angeles doing session work for soundtracks, was inspired by his week in Manhattan to consider spending more time in New York City to get back into the gigging scene.

When the three virtuosi stepped on stage they were greeted with thunderous applause; they wasted no time launching into displays of prowess for which each is legendary, though the performance was more dialog-driven and interactive than showy.

Tyner’s modal workout “Trane-Like” (from the Telarc album he did in 2000 with Clarke and Al Foster) was the first tune offered, played at a brisk tempo with ample room for solos — allowing all to warm up, flex fingers and get in sync with each other. Tyner’s crisp, single-note lines spun and spiraled, and Cobham’s melodic use of the entire drum kit was a marvel of intuitive orchestration. But it was Clarke’s richly textured approach that caught most of the audience unaware. From the first tune on, he attacked each solo with gusto and delight: hopping between funky, legato playing and his patented blurred-fingers technique at the top of the fretboard with an almost electric-bass tone.

It was obvious Tyner — who struggled with the club’s piano and wasn’t happy about it — was calling the shots: “Come Rain or Come Shine” was the pianist’s choice for an evocative ballad. Bass and drums had an Afro-Caribbean dialogue next — Clarke setting up a rhythm, Cobham providing a second rhythmic layer with shaker/mallets on the toms — which developed into the Latin-flavored “Angelina” (off Illuminations, another recent Tyner title) that featured flamenco-flavored strumming from Clarke. Especially on that number, the use and masterful control of dynamics by all was astounding (and made sure the earplugs remained pocketed.)

The hard-boppish “Steppin'” was kicked off by a Cobham explosion on cymbals and toms, and then it was Tyner’s turn to shine again, creating an improvisation that surprised with hints of stride devices and teases of Tatum-like runs. Cobham’s four-stick solo — two in each hand at 90-degree angles — brought the tune to a close.

Tyner calls the blues the “real national anthem,” and every time I’ve caught him recently he closes with one. Clarke took full advantage of the form, improvising — even bending the strings — as if he was working a club on Chicago’s south side.

Suddenly it was over. No encore, lights up, another show to seat. The air of expectation helped make the 55-minute set seem like five.

All later said they were ecstatic about how their music and interplay had developed over the week, and they are looking forward to the week they’ll spend together at Yoshi’s in Oakland in January. Might this trio record anytime soon, I asked? Smiles and silence.