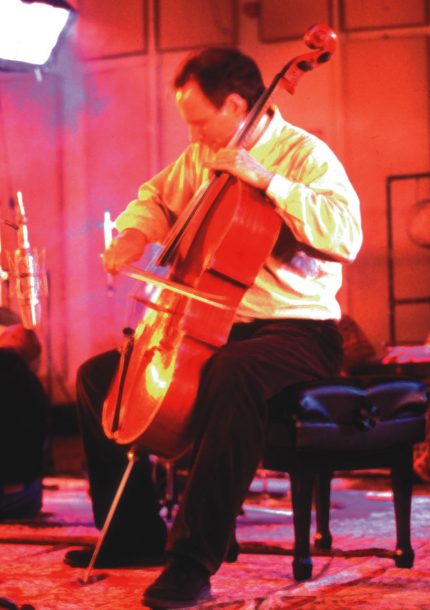 After a prolonged absence, jazz returned to the Knitting Factory in full force with the NYC Winter Jazzfest, a seven-hour Sunday marathon in which 19 bands were paraded across the Knit’s three stages in a remarkably efficient and punctual production pulled together by the club’s new talent booker Brice Rosenbloom (formerly of Makor and more recently late of Jazz at Lincoln Center). As trumpeter Dave Douglas announced to an enthusiastic audience before his set in the Main Space, “I haven’t played this room in half a decade. It’s good to see they’ve got music back in here again.” (A not-so-subtle dig at the preponderance of alternative rock which had inhabited the Knit in recent years.)

For the artists, this jazz bash was an opportunity to showcase in front of presenters, promoters and talent buyers from around the country (over 3,500 arts professionals were in town for the annual Association of Performing Arts Presenters conference from January 8 – 11). For the audience, it was an opportunity to hear a dizzying array of top shelf bands and feel their energy up close in intimate spaces like the Tap Bar or the Old Office.

While the Knitting Factory — first opened in 1986 and moved further downtown to its present and significantly larger location in 1994 — built its worldwide reputation by showcasing jazz renegades and a whole host of fringe artists ranging from John Zorn, Elliott Sharp, Wayne Horvitz and Bobby Previte to Bill Laswell, Sonny Sharrock, Peter Brotzman and Charles Gayle, this NYC Winter Jazzfest aimed more for a middle ground. Douglas played it fairly inside while still stretching the form with his energetic new quintet (Uri Caine on Fender Rhodes, James Genus on bass, Clarence Penn on drums and Donny McCaslin on tenor sax). A swinging, flexible unit, they easily shifted from more spacious, In A Silent Way-influenced jams to grooving, old school boogaloos while expertly navigating the tempo shifts and eccentricities of Douglas’ “Skeeter-ism,” a kind of Monk-meets-Mingus number from last year’s Strange Liberation.

James Carter was deep into rollicking mode with his Organ trio, featuring fellow Detroiters Gerard Gibbs on Hammond B-3 and Leonard King on drums. Carter’s inherent swagger, raucous tendencies and relentless over-the-top technique were tailor-made for the excitable, sweaty crowd packed into the Main Space. Even the Bad Plus, with its ultra-slamming approach to the piano trio, sounded somehow more appropriate in this more spacious downtown venue than in the hallowed grounds of the intimate Village Vanguard.

In the Tap Bar, Vijay Iyer’s Quintet lit up the cramped confines with new material from an upcoming Savoy debut, Reimagining (due out in May). With alto saxophonist Rudresh Mahanthappa blowing with white hot intensity and Bird-like facility, bassist Stephan Crump weaving deep, sinuous counterpoint lines and the amazing drum prodigy, 17-year-old Marcus Gilmore (Roy Haynes’ grandson), crackling behind the kit with uncanny precision and power, Iyer’s band delivered a dynamic set marked by provocative, high-energy blowouts like the urgent “Revolution” and the darkly dissonant “Inertia.” For a change of pace they offered the poignant “Song Midwood,” Iyer’s ode to the Brooklyn neighborhood also known as Little Pakistan, which, as he announced to the crowd, “has been the site of way too many post-9/11 roundups.”

The Tap Bar saw a succession of superb bands from Iyer’s Quintet to Stefon Harris’ soul-laden, backbeat-oriented Blackout (fueled by drummer Terreon Gully) to Jason Moran’s ultra-hip Bandwagon (with bassist Tarus Mateen and the eternally swinging drummer Nasheet Waits, and joined by guitarist Marvin Sewell) and Greg Tate’s sprawling 19-piece acid-funk-trip-hop-soul-grunge ensemble Burnt Sugar Arkestra, which tipped its collective hat at different times throughout a genre-hopping set to electric Miles Davis, P-Funk and Sun Ra. Another treat in the Tap Bar was a rare New York appearance by Polish vocalist (now residing in Chicago) Grazyna Auguscik. An adventurous improvisor whose use of electronic effects and harmonizers on her voice owes an obvious debt to Urszula Dudziak’s pioneering work from the ’70s, Auguscik blended Polish folk melodies, wild scatting and fervent hard-bop energy on her “Dancing All Around.” Accompanied by the two-guitar frontline of fellow Chicagoans John McLean and David Onderdonk along with bassist Eric Hochberg and drummer Ernie Adams, she also turned in a haunting rendition of Jimmy Webb’s beautiful ballad “The Moon Is a Harsh Mistress,” an ethereal take on Egberto Gismonti’s “Aqua Vinho” and a radical interpretation of “Blue Skies” that was marked by abrupt time shifts and torrents of otherworldly, electronically altered scatting.

In the Old Office, the Knitting Factory’s smallest venue located in the club’s lowest level, French singer Elene Dee delighted an intimate gathering with original material and a couple of interpretations of Bill Evans tunes, accompanied by pianist David Berkman and saxophonist Billy Drewes. Cellist Erik Friedlander also performed a striking solo set in the Old Office while the genre-defying Gutbucket combined bits of funk and fusion with touches of Ornette Coleman, Afro-Cuban, 20th-century classical and blues in the span of just a few songs.

From 5 p.m. till well past midnight, the Knitting Factory was a thriving, exhilarating scene — a bona fide jazz emporium once again. As the Knit’s Rosenbloom said, “With all the indie-rock that has been featured here in recent years, it kind of alienated certain audiences. We wanted to bring back those people, and artists as well. This festival was a great opportunity to make a statement that we are committed to jazz and experimental music again. And while there had been some jazz programming in the past few months — including a series of Matthew Shipp performances and John Zorn’s New Years Eve appearance here with Mike Patton — this really marked a turning point for us. We’re going to be making an effort now to bring some of the ‘usual suspects’ back and bring the Knitting Factory’s musical heritage back as well.”

With Henry Threadgill, Butch Morris, Bobby Previte and Charlie Hunter already booked for February and David Murray scheduled for an upcoming performance, it would seem jazz fans who deserted the Knit in droves may soon be returning to their old haunt.