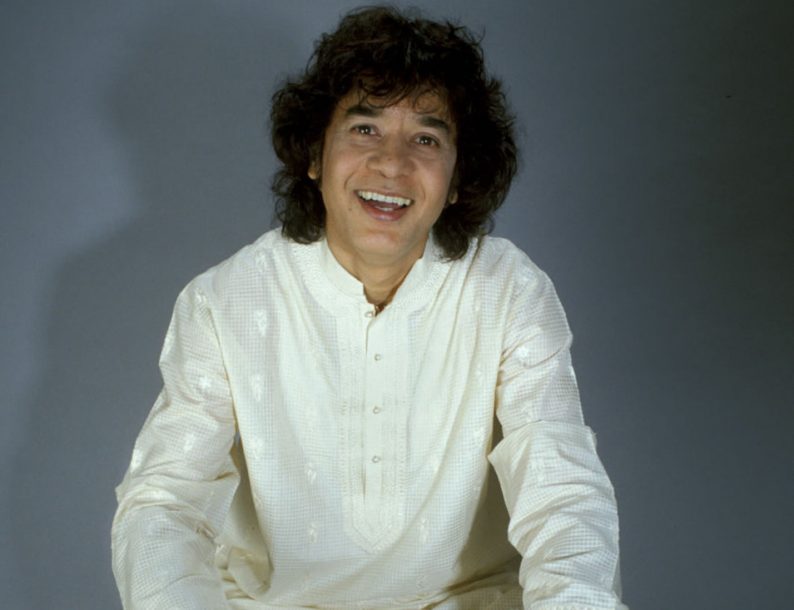 This Perspectives series, held April 26-29 at Carnegie Hall’s Zankel Hall and Stern Auditorium, showcased Indian tabla drum virtuoso Zakir Hussain in four diverse settings. “I conceived of this series as moving from the traditional into the new, from where I’ve begun to where I’m heading,” said Hussain in the program notes. Renowned for his versatility in collaborating with everyone from John McLaughlin (in Shakti and Remember Shakti) to George Harrison to Pharoah Sanders, Jack Bruce, Bill Laswell, Henry Kaiser, Yo-Yo Ma, the Kronos Quartet and Mickey Hart of the Grateful Dead, Hussain has continually pushed the envelope on his instrument while remaining indelibly tied to the North Indian classical tradition. He celebrated both aspects of his playing in these four stunning concerts.

Opening night at Zankel Hall paired Hussain with Pandit Shivkumar Sharma, India’s greatest living exponent of the santoor, a Kashmiri folk instrument that has 86 strings and is played like a hammered dulcimer. Together they created vibrant, mesmerizing ragas and talas that developed slowly and eloquently, gradually building to ecstatic peaks of dazzling virtuosity.

Night two brought the Masters of Percussion featuring Hussain’s former Shakti bandmate Thetakudi Harihara “Vikku” Vinayakram on ghatam (or clay pot), Giovanni Hidalgo on congas and Steve Smith on drum kit. Here the nuance and eloquence of the previous night gave way to sheer fireworks between the four percussionists, each of whom is also a bit of a showman as well as a world renowned virtuoso. Hussain opened the proceedings with an engaging solo presentation in which he thrilled the audience with the rhythmic intricacies and tonal possibilities of his remarkable tabla playing while also demonstrating his adeptness at konokol, a South Indian vocal technique similar to scatting that expresses a system of rhythms through speech. To illustrate the conversational aspect of konokol singing, Hussain cleverly provided a narrative of a jealous woman confronting her boyfriend/husband about his indiscretions, then portrayed both sides of the argument in the standard syllables of konokol. The audience was able to better understand the rapid-fire call-and-response nature of konokol singing after being presented with Hussain’s down-home example.

Smith, a one-time drummer for the rock supergroup Journey and founder of the world-class fusion band Vital Information, as well as a sideman in Steps Ahead, demonstrated his own adeptness with konokol singing (with a head set microphone) while simultaneously playing the rhythms in unison on the kit. Utilizing softer, foam-filled Tala Wands, which he specifically designed for the Vic Firth stick company for playing at low volumes on the kit, he was able to cook on a low flame and blend in beautifully with the dynamic of the group. A longtime student of Indian music, Smith began incorporating bits of konokol into his stage show with Vital Information a couple of years ago. Judging by the impressive command he displayed at this Masters of Percussion concert, he has made huge incremental leaps in his studies of konokol.

Hidalgo, the Puerto Rican conga master who has previously played in Dizzy Gillespie’s United Nations Orchestra and with salsa giant Eddie Palmieri, had hands ablur in his dynamic solo presentation with four independently tuned congas. And the 77-year-old Vinayakram nearly stole the show with his energetic approach to playing his bulbous clay pot. With fingernails, palms and fists, Vinayakram explored all of the tonal possibilities of his unique earthen instrument while emphatically tossing his white ponytail from side to side as he played, like a rock guitar hero in the heat of shredding. After each of these solo performances, the four masters returned to the stage in the second set to engage in some fiery, conversational exchanges that culminated in exhilarating trading of eights, then fours, then twos, eliciting a rousing standing ovation from the crowd.

On the third night, Hussain joined forces with two kindred spirits and fellow virtuosos, banjoist Béla Fleck and double bassist Edgar Meyer, to premiere as-yet-unnamed material from an upcoming trio recording scheduled for an August release (which also includes a triple concerto with the Detroit Symphony Orchestra). Like the Fly trio (saxophonist Mark Turner, bassist Larry Grenadier, drummer Jeff Ballard), these three profoundly deep musicians can easily shift roles. Meyer might bow beautiful, flowing melodies while Hussain covers bass lines on his deep-toned tabla and Fleck comps on his banjo, or Hussain might play melodically on his tablas on top of ostinatos provided by Fleck and Meyer. This remarkably interactive and contrapuntal trio developed affecting, thoughtfully composed themes in a delicate, almost chamber-like setting that also allowed plenty of room for improvisation. The flood of ideas cascading from Fleck’s banjo seemed limitless. His playing throughout the set was marked by uncanny precision, effortless streams of arpeggios and creative use of harmonics, showing virtually none of the glisses, slurs and pull-off techniques generally associated with the bluegrass instrument.

But then, Fleck has long ago gone well beyond the bluegrass genre in his mission to push the envelope on his instrument, whether it’s in his duets with Chick Corea, in collaboration with violinist Mark O’Connor, with his own upstart Flecktones (darlings of the jamband circuit) or his recent collaborations with master kora, djembe and kalimba players from Africa on the new Throw Down Your Heart (Rounder Records). Thoroughly delightful, this unlikely triumvirate of Fleck, Meyer and Hussain has come up with a winning formula that should convert legions of new fans when they go out on tour later this year.

For Hussain’s finale, held on the 90th anniversary of his famous father’s birth (Indian tabla master Ustad Alla Rakha, who passed away in 2000), the Perspectives series moved from the more intimate and acoustically perfect Zankel Hall to the cavernous and more acoustically problematic Stern Auditorium. And problems ensued from the outset with Sangam, the extraordinary trio featuring Hussain on tablas, Charles Lloyd on saxes and Eric Harland on drums. The three had previously played together at Zankel Hall in a memorable 2006 JVC Jazz Festival appearance. But in Stern Auditorium, a notoriously difficult space for dealing with drums or electric instruments, Harland’s powerful drumming often drowned out Hussain’s brilliantly complex tabla work. At Zankel the previous night, you could hear every tone, every nuance, every fingernail scratch on the head of Hussain’s tablas as if listening to a crystal clear stereo mix with headphones on. That was hardly the case this night in Stern Auditorium.

Sound problems aside, Sangam’s set ran the gamut from peaceful meditations to dizzying crescendos with 71-year-old Lloyd, the shamanistic figure on stage decked out in white linen suit for the occasion, alternately blowing on flute, alto sax, tenor sax and tárogató (a Hungarian version of a clarinet). They opened with the drone-oriented “Guman,” with Lloyd exploring an introspective, pastoral theme on piano. At some point Harland, who began playing coloristically on the kit with mallets, walked over to the piano, sat down on the bench beside Lloyd and engaged in some four-handed keyboard work with the renowned saxophonist while Hussain offered some plaintive singing on top. As this opening incantation progressed, Lloyd left the piano to sit at Harland’s drum set. He gently communed with each of the drums, using fingertips instead of sticks, before picking up his flute. Harland then began pedaling a single, droning bass note on piano while aggressively pounding the wooden top of the instrument with his fist, occasionally forearming the keys like a cross between Cecil Taylor and Ray Nitschke.

For “Aura,” Harland returned to the kit and commenced playing what looked like a large metal wok while Hussain held down a bass groove on his deep-toned tabla and Lloyd played an impassioned alto sax. And for “Sangam,” Lloyd switched to tenor sax and summoned up an intense late Trane vibe against Harland’s churning 12/8 pulse on drums. Surprise guest Jason Moran joined the trio for “Tales of Rumi” (with Lloyd on tárogató) and the calming “Ramanujan,” on which Lloyd conjured up a sublime “Dear Lord” vibe. Both pieces also showcased some daring call-and-response between Hussain’s tabla and Moran’s harmonically provocative piano work. Vocalist Shankar Mahadevan, who delivers songs with dramatic, almost theatrical flair, next came out with his Remember Shakti bandmate, mandolin virtuoso U. Shrinivas, to join the group for “Maa,” with Lloyd shadowing Mahadevan’s vocals on alto sax. They ended the set in sublime fashion with “Hymn.”

Following that more subdued first set, fireworks flew in the second set with the current members of Remember Shakti (sans John McLaughlin) partaking in a series of extended ragas that showcased the individual members’ staggering virtuosity. Ghatam master Vinayakram, a charter member of Shakti from the ’70s, joined the group on “Naina Roochi.” Then another surprise guest, banjo ace Fleck, joined the crew for spirited renditions of the loose and highly interactive “Shrinivas Jam” and “Kirwani,” both of which involved some incredibly precise, near-telepathic exchanges of eights, then fours, then twos between all the players. They built to a frenzied crescendo on “Radhay Rani,” with 77-year-old school showman Vinayakram nearly upstaging his colleagues. It was a fitting, high-energy ending to an extraordinary set, putting an exclamation point on Hussain’s four-night Carnegie gala.