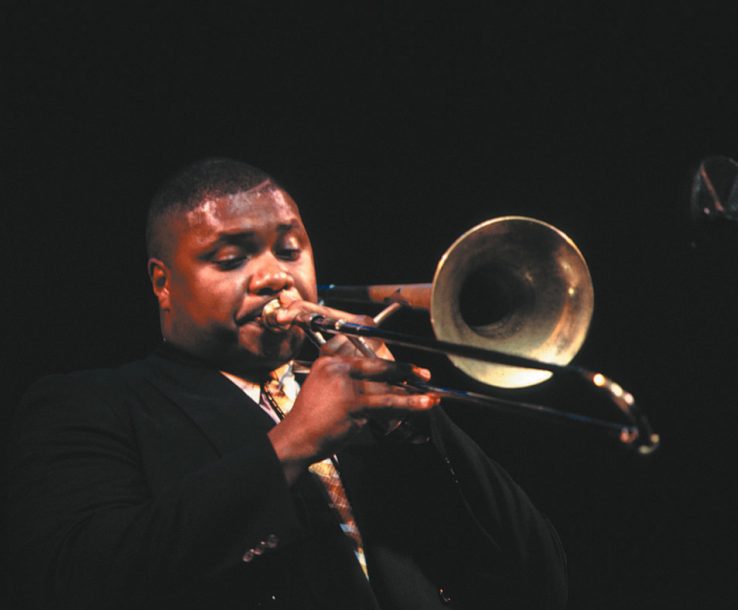 As a featured sideman with Wynton Marsalis, trombonist Wycliffe “Pinecone” Gordon amassed a fine international reputation, based on his effusively swinging style and unmatched modern mastery of the plunger mute. Now, Gordon has arrived as a skillful and confident leader in his own right.

Gordon was born May 29, 1967, in Waynesboro, Georgia. He lived there until the age of 10, when his family moved to Augusta, where, he says, “most of my formative years took place.” He has five siblings who were all musicians at one time or another; he became interested in the trombone when his older brother Lucius brought one home from junior high. His father had training as a classical pianist, but his parents mainly listened to blues. Some of his early playing experience came in the family’s church, and one of his sisters is a professional church pianist.

After Marsalis discovered him during a February 1987 clinic at Florida A&M University in Tallahassee, where Gordon was a student, he joined the trumpeter’s sextet on June 6, 1989, in Charleston, South Carolina. At first “I didn’t get a chance to play much,” Gordon recalls, “because there was no music written for me, the seventh member of the band, just yet. But I needed that time to get my stuff together, because I would hear them play, and it was just completely wild. I had to go back to basics and fundamentals during that period.”

In 1991, Gordon noticed that his teeth were shifting and consulted a dentist. What followed was a three-and-a-half year orthodontic ordeal that painfully tested his resolve. “I wanted to take a pair of pliers and just rip them out of my mouth,” Gordon says of his braces. “That was when Wynton was doing the music for In This House, On This Morning, which called for a lot of high playing.” Amazingly, Gordon was able to build and maintain his reputation as an ace trombonist with Marsalis, in spite of the temporary handicap.

Gordon’s solo albums have espoused a variety of jazz styles, but he holds the styles of the great pre-J.J. Johnson swing-era trombonists in special regard. “The thing that sucked me in was New Orleans jazz,” he explains. “The second year after I started playing, I had a great aunt who passed. Among some things that were given to the family, there was this five-record collection of jazz music. Of all the things that I heard, I really liked the Louis Armstrong Hot Seven.

“When I’m asked the question, ‘Who’s my favorite trombonist?’ I can’t really say one,” he elaborates. “Because all of them, what they had to say on the instrument was so profound. The way that Vic Dickenson or Dicky Wells played, they made the trombone talk. It gave the horn life. A lot of trombone players want to play like saxophones or trumpets, but when you’re talking about someone like Lawrence Brown, he played the trombone like a trombone. As did J.J., and of course, Carl Fontana and Frank Rosolino.” He describes his unique plunger style similarly, as a modern synthesis of previously time-honored styles. And Gordon, too, plays his trombone like a trombone-usually: He also plays his horn like a didgeridoo and vice versa, as he demonstrates on The Search.

In addition to recordings and occasional gigs with Marsalis, Gordon is an associate professor at Michigan State University in East Lansing, and recently released a CD drawing on his gospel roots, The Gospel Truth (Criss Cross).