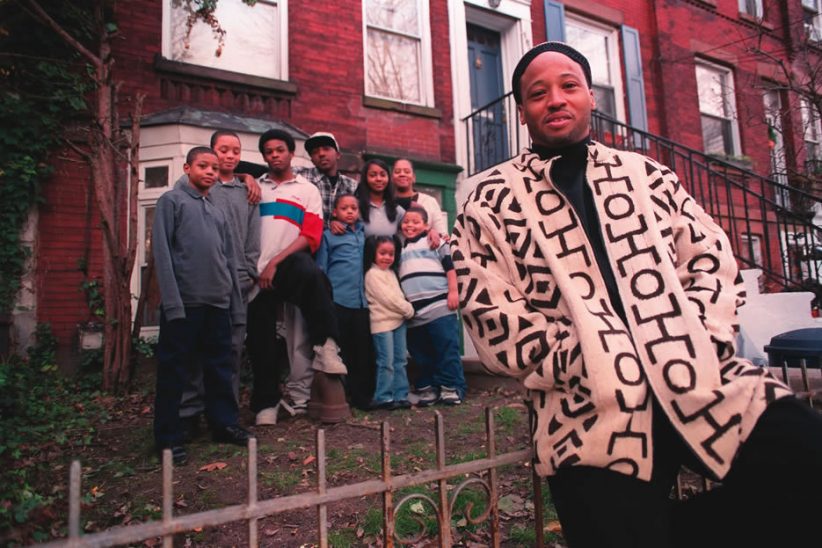 There are a number of ways to describe Winard Harper-jazzman, drummer, composer-but the term that probably best describes him is family man.

That’s because Harper, besides being an extremely in-demand sideman and leader, has an equally important role, with his wife, Alexis, as leader of a family of 10 children, nine of whom still live at home. As Harper chatted in the front parlor of their home, our conversation was punctuated by visits from children of various ages and Missy, the family’s white Jack London Terrier.

One of Harper’s observations about raising a large family in a cozy three-story brownstone in Northern New Jersey is that even something as simple as planning time together gets complicated when dealing in volume. “It seems to be different than when I grew up. It seems like we had more time when I was growing up. Now time seems to go away, or we lose it real quickly. I don’t know what that’s about. It seems like they get up in the morning, they go to school-my wife gets everybody ready, gets ’em out of here-[and] by the time they get home, it’s maybe 5:30, 6 o’clock. So then you’re trying to get dinner ready. And then it’s time to get everybody into bed and start all over again. So there doesn’t seem to be a whole lot of time.”

As far as sharing the evening meal, “We usually have to plan dinner around how much time we have for them and get them ready. Certain nights will be pizza nights, because I don’t want to bother my wife, I want to try to get them fed quickly. Either pizza or Chinese food. But…most of the times, I’m cooking or my wife’s cooking. Pasta dishes…we eat a lot of chicken, a lot of fish, some turkey.”

It seems surprising that, despite the large family, the Harpers go out to the movies for entertainment in addition to gathering around the DVD player. “As often as we can, we do take them out to the movies,” he laughs. “It’s not cheap, by no means. Now it’s getting to the point where I’ve got so many kids that they might not all want to see the same thing; so my wife may have to take half and I have to take half. And every now and then, I may be able to make some time to just take her to the movies. I was trying to work that out for today, to see if I could maybe take her to that new Denzel Washington movie, Deja Vue. That’s very rare that that happens. It’s not as often as we would like. I think the last time I took her to a movie was a Denzel Washington movie, Inside Man.

The Harper family finds togetherness through trips to nearby parks, shopping and dad’s East Coast gigs. “What I have tried to do over the years, is a lot of my gigs that I go to, I try to take them with me. Most of them have been in most of the clubs…when I was going to D.C., quite often with Billy Taylor doing the Kennedy Center, they would all go with us for New Year’s Eve,” he says.

Religious holidays are slightly different in the Harper household, he said, because they’re based on Muslim eids, or feasts. Secular holidays, however, are familiar to most people.

“For Thanksgiving, I put them in a van [and] we all drove down to Georgia, to see my mother, my older brother and my sister,” says Harper. “That’s always an adventure, you know, because you’re in the car with the kids. I think going this time it took us about 17 hours to get down there. The traffic was terrible…It took us about six hours to get through Virginia.

“Those times, that’s usually when we’re going to spend the most time together because we’re all confined in a van. I’ve got everybody together and ain’t nobody goin’ nowhere,” he laughed.

How does Harper keep things sane during such long trips? “We enjoy it. Sometimes I’m able to put on some of my music. Earth, Wind & Fire and some of the older things from the ’70s that I grew up with that they’ve all come to love and enjoy. Nowadays, everybody has their own Game Boy, iPod. So if they’re not into any of that you see the headphones come on if they get tired and everybody will go into their own little space.”

“I’ll also carry around…the tapes from our [Islamic] prayer services [from] Fridays, especially if I’ve been on the road and I missed some,” he said.

Traveling on the road for work as he does and keeping musicians’ hours when home, Harper credits his wife, Alexis, whom he met during a Harper Brothers Band gig at the Jazz Showcase in Chicago, with keeping things together on the home front.

“When you’re pulling those kinds of hours…it makes the family dynamic different,” he said. “I’ve been very, very blessed, and I always tell people a big part of it is definitely having a strong mate; somebody who really understands what you’re doing, can cover things at home when you’re out [and] help keep the family together. My wife, she’s very good about that.”

“For me, I’m trying to take my level of playing and apply that to my level of living,” said Harper, who sees a parallel. “I’m trying to…live a better life. Utilize all of the hard work that I put into playing into my living. Because sometimes I think people need to do that. The beauty of music is so full of balance, rhythm and harmony. Sometimes we forget to apply all of those same laws to life. It’s like if I get on the bandstand and even if something goes wrong, if something happens, I’m going to definitely think and work about trying to make it work or make the best of it. So now I’m trying to…do that in my life, where if something goes wrong, if something’s not exactly what I want it to be, not just going off on a tangent…try to see if I can play the music.”

“I do a lot of reading, but most of the reading I do is spiritual-based,” said Harper, who practices Islam.

Although Harper lives in an area greatly affected by the Ground Zero attacks, he said it has not been as bad as one might think since 9/11. “I think here for us, the African-American community, not so much. It’s one of the first times we’re not getting designated. Now, the other side has had a chance to see what we normally had to go through. Just a few things…in the airports you run into a few things,” say Harper.

“In one sense, it is good that a lot of this is coming about, because maybe in this day and age we’ll decide to deal with it, use some good thought, good thinking and good hearts and get the problems dealt with-try to make the world a better place.”

“I’ll go to Newark, to one of our favorite places, a meat store called Unity, and they sell all Halal meat. They make the greatest sausage,” says Harper. “The driver who drives me to the airport, I take him over there, and after one or two times he loves the sausage.”

“Junk food? Are you kidding? That’s one thing that anybody will tell you: That guy loves sweets,” says Harper. “One of my favorites places in New York is a place called the Little Pie Co. If I’ve got time, and I’ve got the money, I go by there and get their two best pies-Pecan Pie and Sour Cream Apple Walnut.

“If I go anywhere on the West Coast, I come back with bags of See’s Candies. I try to find as much as I can buy. And I try to make them wrap them up real good so I don’t get into them before I get back.”

“Not a lot of time, but I work out a lot,” says Harper, who passes that suggestion along to his children and younger bandmates. “I was working with a guy one time and he said: ‘One of the greatest assets that you have, that you lose and you probably never get back, is your health.’

“Billy Higgins, we were close: really, really tight. He sat on this couch, with the kids on his lap…he used to tell me, ‘If I knew I was going to live this long, I would have taken better care of myself.'” Harper adds that he got into the habit of taking a run after a gig when working with Betty Carter in the 1980s as a way to clear his mind and body from the cigarette smoke prevalent then in jazz clubs.