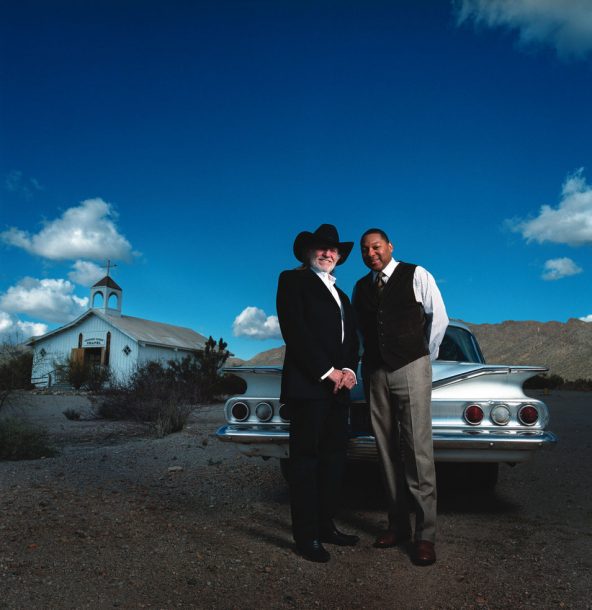 Ah, together at last-outlaw country eminence gris Willie Nelson and jazz icon and lightning rod Wynton Marsalis. While the phrase “Willie and Wynton” might fall awkwardly off the tongue for some, history has in fact shown that Willie Nelson and jazz have a much closer alliance than genre-splitting pundits and audiences know or fess up to. Anyone who listens up to a Willie Nelson show hears jazz freely filtering through the twangy cracks.

Another trumpeter, Miles Davis, was a Willie fan before it became fashionable for one and all to be, and Miles even named a track after him (heard on the reissue box The Complete Jack Johnson Sessions). Now comes the agreeable live recording Two Men With the Blues, Marsalis’ summit meeting with Nelson. At its best, the album is a meeting of American heroes, one from Texas, one from Lincoln Center by way of New Orleans, with links to the South and to all sides of the racial and socio-musical divides.

Nelson is a wonderful jazz musician without really trying or naming himself such. He has a naturally loosey-goosey way with phrasing, both as a singer-slipping in and out of the melody’s rhythmic values as written-and also as an intuitive wizard as a guitarist, attacking his road-worn nylon-string box with beautiful fervor and a dry, slippery intensity informed by Django Reinhardt.

On the evidence here, the hook-up of Willie and Wynton is sometimes a good notion, sometimes not so much. Obviously, these two men, both at the top of their respective games, have the blues in ways far removed from the privations and cultural corners of the traditional bluesmen. When Nelson wraps his deceptively relaxed vocal style around his Hoagy Carmichael songbook chestnuts “Stardust” and “Georgia on My Mind,” the jazz cred is moot. And Marsalis’ soloing throughout parses vintage-sounding blues riffs and his naturally probing attitude as a player, seeking out the cerebral blue notes of his personal devising.

In the very first measure of the album, the blues form is dressed up with somewhere contemporary to go. On “Bright Lights, Big City,” while blues harp player Mickey Raphael (a Nelson band regular) holds fast to a single note down below, Marsalis and saxophonist Walter Blanding punch out angular dissonant notes. That intro, before Nelson sings a single note, sets the stage for a program that wants to be many things at once-swing, twang, blues business and contemporary hipness-and doesn’t always find the sweet spots in the middle.

Maybe next time, more unexpected material and elements of surprise would spice up the Willie & Wynton Lone Star gumbo. For now, it’s only as strong as the sum of its impressive parts.