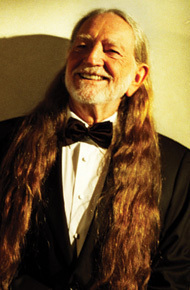 His voice, tough and tender as well-aged boot leather, is one of the most recognizable across the wide plateaus of American pop, country and jazz. Unaffected, unadorned and blessedly unpretentious, his is a gut-level musical honesty that knows few equals. Willie Nelson sings what he believes and believes what he sings. It’s that (deceptively) simple.

The album’s title is obviously intended to describe both artist and repertoire as Nelson, for the first time since recording the momentous Stardust 30 years ago (and opening the door for an endless parade of lesser crossover artists to invade the Great American Songbook), fills the entire album with standards. A more laidback outing than Two Men With the Blues, last year’s sterling teaming with Wynton Marsalis, American Classic finds Nelson deservedly at the center of an exemplary assemblage of talent, beginning with producer Tommy LiPuma and arranger Johnny Mandel (for four of 12 selections), and including bassist Christian McBride, drummer Lewis Nash, pianist Joe Sample, guitarist Anthony Wilson and, on two tracks, harmonica player Mickey Raphael.

Clearly respecting the headliner, they lay blankets of softest velvet beneath Nelson’s grizzled magnificence. Equally respectful are Diana Krall, on piano and companion vocals for a sultry “If I Had You,” and Norah Jones, on hand for some delightfully playful sparring on “Baby, It’s Cold Outside.” Still, Nelson best flies solo, whether merrily gliding through “Fly Me to the Moon” or descending to the gloomily reflective depths of “Angel Eyes,” bringing richer inscrutability to that incomparable exit line, “Excuse me while I disappear,” than any artist before him.