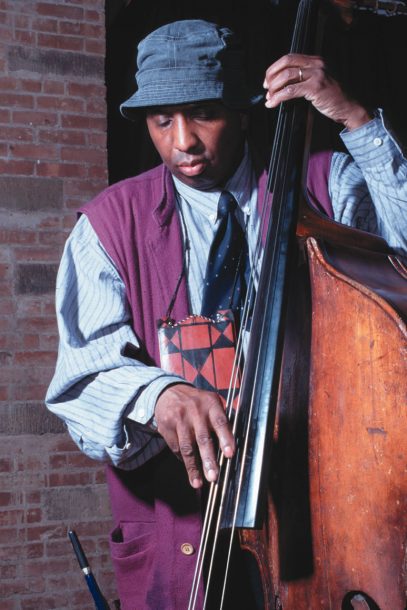 William Parker has established himself as a free-leaning bassist and bandleader. He’s become a Lower East Side community fixture as the organizer of the Sound Unity and Vision Festivals (the latter takes place May 24 to June 8 in New York City). But he’s also distinguished himself as a prolific composer, churning out ever-fresh material for his big band, the Little Huey Creative Music Orchestra, and for his quartet, In Order to Survive.

In mid-March, Parker departed from playing his original compositions for the first time when he presented “The Inside Songs of Curtis Mayfield” at the Banlieues Bleues Festival, a five-week jazz extravaganza held in the northern suburbs of Paris. Parker arranged both obscure and well-known Mayfield for the concert, including the blaxploitation film soundtrack classics “Superfly” and “Pusherman.”

At the show, a giddy French audience received Parker’s septet. The group strung together tunes into a kind of Soul Preacher Tribute Suite, with vampy percussion from Hamid Drake and pianist Dave Burrell, and horn accents from trumpeter Lewis Barnes and saxophonist Darryl Foster. Poet Amiri Baraka and singer/dancer Leena Conquest interpreted Mayfield’s lyrics. In addition to that concert, Parker was selected to lead an “Action Musicale,” a festival program for which he conducted workshops at suburban high schools, and then headed up a performance with an 80-voice youth choir, a djembe ensemble and local amateur horn group. A couple of days before the performances, Parker spoke at his Paris hotel about Mayfield, the festival workshop and concerts and jazz in France.

JazzTimes: You must have grown up hearing Mayfield. What were some of your early impressions of him?

It was in the late ’60s and early ’70s, and we were still feeling the civil rights movement. At the same time, we-meaning some of the people in the community where I lived in Bronx, N.Y.-were listening to Archie Shepp and Albert Ayler and Curtis Mayfield, along with all the Motown music that came out. Curtis’ songs were catchy but meaningful; they had a hominess and could speak to you on a one-to-one basis about the issues of the day. For certain times, me and my brothers would put on certain music. On Sunday, we’d play Herbie Hancock’s Maiden Voyage; on Fridays we’d play Ornette Coleman At the “Golden Circle”; in the mornings our record was Members Don’t Get Weary by Max Roach. But we’d listen to Curtis Mayfield all the time in between. He was always there, as our living soundtrack, in a way, especially since we heard him on the radio on WLIB.

JazzTimes: How were you lured into performing someone else’s music when you’ve always played your own?

I was at the Banlieues Bleues Festival last year in the dressing room casually talking with Matt Shipp about how I might do a Curtis Mayfield project, and [Banlieues Bleues Festival director] Xavier Lemettre was eavesdropping. He called me several months later and said he’d heard me saying offhand that I was interested in doing a Curtis Mayfield project. So once we’d established that I was serious about it, Xavier had the idea of not only doing the actual concert, but teaching the children and young teenagers, too. This is the first concert in my life where I’ll be doing someone else’s music. There have always been certain projects I had in mind to do, though, and Curtis Mayfield was one of them. Some people are surprised I’m playing his stuff. But to me it’s just part of the tradition, part of the whole range of expression. I’d play bebop tomorrow, but not just as a project, but in order to make a profound statement with it.

JazzTimes: It’s interesting that you’ve asked Amiri Baraka to write poetry for this project, since both Mayfield and Baraka are sort of preacher-poets.

Amiri Baraka is extending the message, writing off the words of Curtis Mayfield. It adds another layer of text. You have the music, the lyrics, the arrangement of the music, the improvisation, the unanswered questions that the music poses-the unanswered questions that are being posed spontaneously-then you try to provide responses with what Amiri Baraka’s doing. We’re doing “Think” and “Pusherman” as instrumentals, without a singer, just Amiri Baraka’s poetry.

JazzTimes: Was there anything that surprised you about Mayfield’s music, when you got inside it to arrange it for your ensemble?

Well, it’s all kind of built off of the same keys, in E or B, guitar keys. It’s just amazing how you have hundreds of musicians who use the same material, and then you have one who goes in and-it’s like if you gave a hundred people four stones each and said build something with this. One or two or 10 people out of the hundred make something different. What I learned is that it’s not really the notes, it’s that when you create something you give birth to an energy that comes out of you, and that same B-flat to C to D is given new life. You can’t really figure out how one does that with music, you can hit one note and make it work. It’s a magical process. Think about words. The rose is red. Red is the rose. You just take three words and change the positions, and it begins to sing. But this is the thing that John Coltrane did, and it taught me that it’s really not the material. In the same way Curtis Mayfield could play anything, and when he got through with it, it was much more than what it was before.

JazzTimes: Considering how often Mayfield is sampled, and how much his grooves have influenced pop music, it’s strange that people don’t know more about him.

A lot of young people don’t know the music of Curtis Mayfield. I was just on a trip to Amherst at the end of February with the Little Huey Creative Music Orchestra. We were listening to the oldies station, and they don’t really play the “Superfly” or ’70s material. They play some of his older Temptations material, like “Mama Didn’t Lie,” stuff that you’re not even aware he wrote. A lot of Curtis’ music falls into a little different area; it’s catchy, but not pretentious, and is just different. I just hope that people who don’t know about his music buy some of his records and get into it.

JazzTimes: This project, especially the educational component, the Action Musicale, requires funding that you’d be hard pressed to find in the U.S. Why do you think the French offer so much support for jazz, when it’s originally an American art form?

A lot of American jazz musicians in the ’50s found a home here. It’s been very warm and open to Afro-Americans’ improvised music. I think it’s become part of their tradition, not only to support jazz, but all the arts. It’s marvelous. In 1980, I went to Poland. There was no food there. There were lines around the corner to get cans of beets and cabbage. We were over there to play, and thought the first thing they’d cancel would be the jazz festival. Here we were in the midst of this, from America, supported by Poland, and they haven’t cancelled the festival. In America, we have a long way to go to get close to the funding they have in Europe, especially in France. Sometimes I like to do a proj-ect while it’s hot, and keep it going, but I don’t see any venues for the Mayfield one in the States. It will be recorded at Banlieues Bleues, so we’ll put it out, and then there might be some concerts in the States. But then I might do a blend of original music and Mayfield’s stuff.

JazzTimes: Why do you call your project the “Inside Song” of Curtis Mayfield?

It’s like having a tablecloth that’s reversible. We see only one side of it, but there’s another side, which may be the most beautiful side, which we haven’t seen. And when you really tap into the music, it opens up and goes beyond his notes and words. That was the concept, to tap inside. Because what he was doing, is not really so different from what I’m doing.