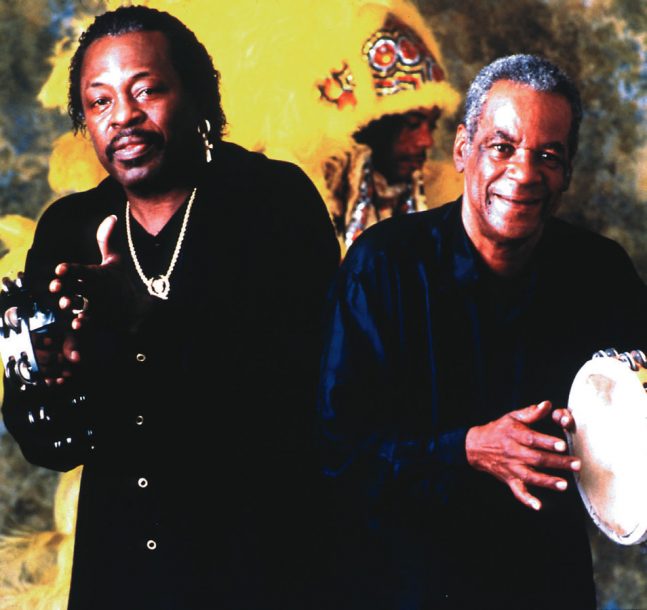 Mighty-kooti-fiyo, “hey pocky way'”and “jackomo-feena-hay” are familiar phrases in only one place on the planet -the Crescent City, y’all. During Mardi Gras you can hear the various black Indian tribes calling out those Creole chants while parading down Claiborne Avenue, resplendent in spectacular hand-sewn feathered costumes. It’s a sight to behold and the rhythms they bang out on tambourines anhand percussiogradually work their way on your nervous system until you’re at least tapping your foot, if not joining in behind them in a second line.

While the Mardi Gras Indians tradition of masking andparading dates backto the late 1880s, it didn’t start crossing over into mainstream consciousness until 1970, when a young Tulane student named Quint Davis (now producer of the New Orleans Jazz & Heritage Festival) approached Big Chief Emile “Bo” Dollis of the Wild Magnolias about cutting a 45. That disc, “Handa Wanda, Pts. 1 & 2,” stirred up curiosity about the Indians. With the 1974 release of The Wild Magnolias (Polydor), awareness of that New Orleans subculture soon spread to other parts of the country.

To commemorate their 25th anniversary since that auspicious debut, Big Chief Bo Dollis and the Wild Magnolias have cooked up an all-star gumbo in Life Is a Carnival (Metro Blue), an updating of an age-old tradition. Joining forces with Big Chief Monk Boudreaux of the uptown rival Golden Eagles, they throw down in typically raw and raucous fashion in the company of special guests Robbie Robertson, Bruce Hornsby, Allen Toussaint, Cyril Neville, Dr. John, Rockin’ Dopsie, Jr. , and the Black Bottom Brass Band of Osaka, Japan.

Grounded by the slamming backbeats of Neville Brothers drummer Willie Green, Life Is a Carnival is a party that transcends the Crescent City’s 13th ward. Tracks like “Party” and “Old Time Indian” sound more like p-funk jams than vintage street beats but they do revert to old school on “Herc, Jolly, John” and “Tootie Ma,” while Dr. John’s “Who Knows” and “Cowboys And Indians” provide a sense of history.

“It’s just us doing our thing as usual,” says Dollis. With a little help from their friends.