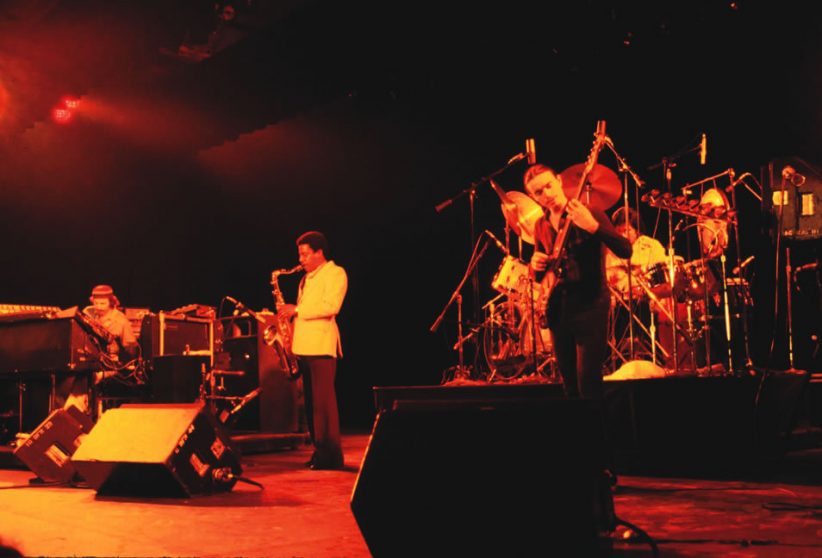 At this point in their respective careers, neither Joe Zawinul nor Wayne Shorter is in the habit of going back and listening to the classic recordings of Weather Report, the groundbreaking band they cofounded back in 1971. As the forward-looking Zawinul, now 74, so succinctly put it a couple of years ago, “I don’t listen to the old music. When it’s done, it’s done.”

Nevertheless, three-time Grammy Award-winning reissue producer Bob Belden was able to get both Zawinul and Shorter to review their massive Weather Report catalog on Columbia Records and hand-pick selections for Forecast: Tomorrow, a three-CD anthology containing 37 tracks spanning the group’s recorded output from 1971 to 1985. Included in this deluxe box set is a DVD of a live concert performance in Germany on Sept. 28, 1978. Filmed at the Stadthalle in Offenbach, this never-before-seen footage captures the Mr. Gone edition of Weather Report (Zawinul, Shorter, Jaco Pastorius and Peter Erskine) at the peak of its dynamic powers. As Belden notes, “A Weather Report concert at that point was more than just a show; it was a spectacle. They had taken it well beyond intimate jazz for a club setting by introducing a stadium-rock mentality into the business. That’s when musicians started spreading out onstage and bands started traveling with their own sound systems and sound engineers. And Weather Report was the pioneer of that.”

The set list for this particular Weather Report concert in Offenbach covers a wide spectrum of the band’s book, including “Waterfall” from the group’s self-titled 1971 debut album, “Scarlet Woman” from 1974’s Mysterious Traveller and “Badia” from 1975’s Tale Spinnin’. Also included are the title track from 1976’s Black Market, “Teen Town” and “A Remark You Made” from 1977’s Heavy Weather, and “River People” and the title track from 1978’s Mr. Gone. The concert, which also includes solo vignettes from each band member, captures the unrelenting energy and macho intensity that were Weather Report’s trademark back in the ’70s.

“This was one of the most complicated box sets I ever had to deal with,” says Belden, who has produced a string of acclaimed Miles Davis box sets for Columbia/Legacy over the past 10 years. “The video element alone was a struggle because it meant dealing with a German television company and working out an arrangement with them for the tape. And I knew that this was the one video that would work perfectly in the context of this Weather Report anthology, because the set they played that night included a medley of greatest hits and it was also a really well-performed concert. Some other videos that I was bringing up, Joe would reject by saying, ‘Oh, no. That was a terrible performance. We can’t use that.’ But this one, he didn’t have any bad vibe on it, so I knew that that was a good start.”

The anthology also includes three key tracks that serve as precursors to the adventurous path that Joe and Wayne would trailblaze with Weather Report: Zawinul’s “In a Silent Way” from the landmark 1969 Miles Davis album of the same name; Shorter’s frantic, free-blowing title track from his 1970 Blue Note album Super Nova (featuring the twin-guitar attack of John McLaughlin and Sonny Sharrock along with Miroslav Vitous on bass and a potent drumming tandem of Jack DeJohnette and Chick Corea); and Zawinul’s open-ended “Experience in E” from Cannonball Adderley’s 1970 Capitol recording, Domination.

When asked about whether he had a personal favorite among Weather Report’s various incarnations and albums, Zawinul told writer Brian Glasser (author of In A Silent Way: A Portrait of Joe Zawinul): “I feel really good about all those different outfits. We were as sincere with one as we were with the other. It was great fun. And when it was not anymore fun, we changed. So I have to say it was totally fun all the way.”

The synth virtuoso, whose own Zawinul Syndicate is coming up on 20 years next year, also adds, “Weather Report was a special band. I thought at the time it was just what it was, and looking back I can really listen to it without being ashamed. And that’s a good thing. But I must say that for that band, there’s an amazing longevity in terms of concept and just the way we came off.”

A representative sampling of that rich legacy can be heard and seen on Forecast: Tomorrow.