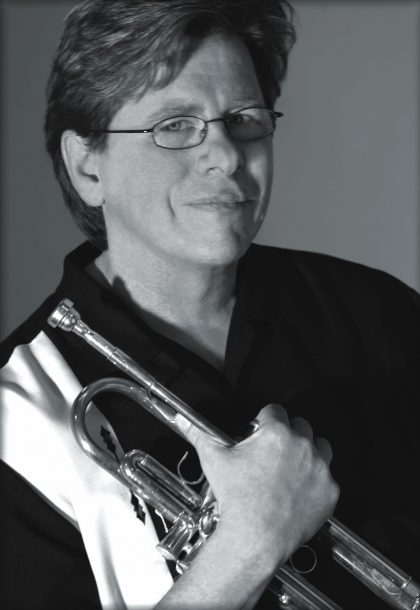 Gary Foster has long been recognized as one of the finest saxophone and flute specialists in Los Angeles recording studios. He knows that praise is not something that can be counted on in his line of work. But an incident in 1999 crystallized his estimation of trumpeter Wayne Bergeron. Maynard Ferguson’s Big Bop Nouveau Band was augmented by some L.A. players and during a rehearsal, Maynard made a pronouncement. “I just want to say,” said the high-note legend, “while Wayne is here with his colleagues, that no trumpet player has ever made Maynard Ferguson sound as good as Wayne Bergeron has!”

The ensuing years have borne out that endorsement. “In any field of the arts,” Foster offers, “there never seems to be a need for one more person. However, the extraordinarily talented individual-who has everything-often makes a place for himself. And Wayne has it all. The respect that flows to him as a trumpet player and as a person is wonderful to see.”

Big bands convene only occasionally, as studio aggregations and for occasional concerts. The role of the lead trumpeter, who congeals his section and brings the orchestra together, is nearly obsolete. Yet Bergeron has become the most sought-after trumpet player in Southern California studio dates and in big bands, precisely for his lead skills. Although he’s been the coveted favorite of contractors and bandleaders, Wayne is stepping into the limelight. The current Plays Well With Others (Concord), is part of his ongoing bid to be considered as a jazz soloist.

“I’m almost 50,” concedes the affable Bergeron. “So it’s now or never. I’m not trying to get rich, I’m just trying to have a good time. I want to put out a good product and inspire some kids to play.”

The trumpeter has been an important part of composer-bandleader Gordon Goodwin’s Big Phat Band. “Wayne?” Goodwin deadpans, “He sucks! Unless, of course, you like a guy who can play anything the first time through, hit any note right in the middle-no matter how high and how fast-phrase it perfectly and take the band along with him. He’s genetically programmed to play lead; I heard him play a double high C in junior high.”

Trombonist Andy Martin, a Phat Band regular, observes that, “Wayne leads by example, and from day one, I’ve noticed that he has something physically special. It’s lung capacity or something. But he keeps working on everything he has and he grows every year.” Goodwin agrees: “He’s like the athlete who trains off-season and shows up at camp with a whole new skill. It’s very inspiring.”

Bergeron concedes that biology is one of his hole cards. “Even as a kid, I went the lead route,” he recalls. “I liked Maynard and the other first-chair guys. I had a natural lip as a kid and I’ve been able to play high since I was a kid. Then I chipped my tooth and that allowed air to whistle through the column; and that helped too.”

“Gordon will go to Wayne with a question about phrasing or articulation,” says percussionist Brad Dutz. “And it’s Wayne’s attention to detail that can take something that doesn’t quite lay well on the page and figure out the best way to play it. I’ve seen him make many writers-and good ones, too-look better than they would without his input.” Goodwin is more blunt about it: “Wayne has covered my mistakes for years.”

Interestingly, Bergeron only played with Snooky Young, the legendary lead man, once. “He had unbelievable time-feel,” recalls Bergeron, shaking his head and staring straight ahead. “And another guy I heard was Al Porcino. You couldn’t budge his time with a freight train.”

Bergeron the soloist took awhile to develop. “It’s almost been surreptitious,” notes Goodwin. “The leaders all want Wayne to play lead-and I’m as guilty as anyone-and he’s snuck up on us as a jazz player.”

Tenor sax legend Pete Christlieb solos on Plays Well With Others, as he did on its predecessor, You Call This a Living? (also on Concord). “In this town,” he estimates, “you’ve got to be able to do a lot of everything-classical, Latin, rock ‘n’ roll, jazz-to make a buck. I’ve heard Wayne in just about every situation imaginable and nothing fazes him. He doesn’t know that this stuff is supposed to be hard; he just does it.”