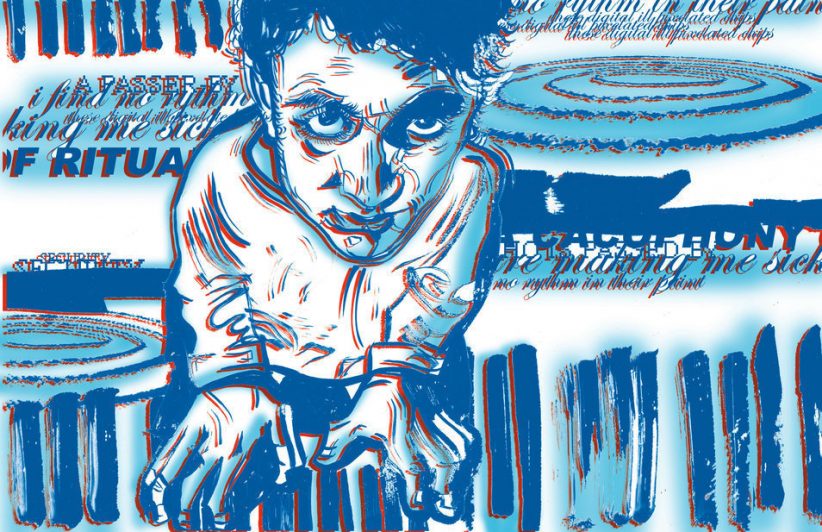 Vijay Iyer’s ascendancy in the new avant-garde has been fairly meteoric, although that’s not to say that it came without warning or cause. The pianist-composer’s resume is heavy with credentials: a combined Ph.D. in music and cognitive science, an M.A. in physics and apprenticeships with the likes of Steve Coleman and Roscoe Mitchell. In the past few years, the relative newcomer has collected critical encomia from all corners. Cultural academic Robin D.G. Kelley’s proclamation of Iyer as “the pianist/composer to watch in our century” is dramatic but hardly atypical.

So it’s evident that Iyer, praised in equal measure for his musicianship, his compositions and his concept, has, basically, already arrived. That said, this year, which has already seen the pianist honored with CalArts’ prestigious Alpert Award in the Arts, could well serve as a landmark for Iyer. In particular, the fall release of these two recordings constitutes an accomplishment akin to critical mass.

Blood Sutra features a working quartet, with Iyer’s regular compatriots Rudresh Mahanthappa and Stephan Crump on alto saxophone and upright bass, respectively. The cohesive group’s ethos is at once reflective and kinetic, conveying obvious affinities with Steve Coleman’s M-BASE collective (especially on a explicitly vamp-structured track like “Brute Facts”). But there’s something utterly distinct about Iyer’s approach. His piano playing can be broad and onsweeping or minutely detailed, but the primary constant is the suppleness of his touch and the liquid warmth of his tone. His way with the quartet is equally impressive, especially with regard to pulse: The ensemble’s rhythmic patterns don’t seem imposed or dictated so much as issued effortlessly from a center, like the concentric ripples on a pond. Naturally, it helps that Iyer’s rhythm-section mates-Crump and drummer Tyshawn Sorey-play with careful attenuation to his style.

Compositionally, Blood Sutra distinguishes itself through familiar methods. Counterpoint is a particular cornerstone, as is thematic variation. Yet there’s rarely anything quite so obvious as a head-solo-head formulation; without crossing into pretentiousness, Iyer’s crew manages to avoid many of the standard trappings of small-group jazz. (They do, however, perform the bebop trick of retooling old tunes: “Because of Guns” is a fond appropriation of Jimi Hendrix’s “Hey Joe.”) Solo statements are uniformly strong, with Iyer’s piano stirrings matched in intensity by Mahanthappa’s angular alto cries. This is exciting and eminently listenable stuff, intuitive in bearing and dynamic in execution.

An essential for adventurous listeners, Blood Sutra could also serve as an ideal introduction to Iyer’s burgeoning oeuvre.

So, in its way, could In What Language?-a modern song cycle coauthored with poet-performer Mike Ladd. Commissioned by the Asia Society in New York, and premiered there in late spring of this year, In What Language? marked a major foray for Iyer into the realm of social protest. He conceived the piece as a response to the experience of Iranian filmmaker Jafar Panahi-who, during a 2001 film festival tour, was wrongfully detained at New York’s John F. Kennedy airport and then deported to Hong Kong. On stage, the suite took bold and dynamic shape; its cast included an expanded Iyer ensemble and several spoken-word performers. And for the Asia Society premiere, the cycle was matched with stage direction and lighting by Rachel Dickstein, yielding a striking multimedia effect.

That visual element obviously can’t be duplicated on a studio recording, but the suite’s sense of movement and drama has nonetheless survived more or less intact. The conceptual setting of In What Language?-essentially, a 21st-century airport – comes to life through Ladd’s libretto, which distributes its point of view among a host of narrators, including a Bombay-born taxi driver and the Trinidadian steward of a terminal metal detector. The characters in Ladd’s world scrutinize and suffer scrutiny; they give helpless voice to the myriad frustrations of a modern globalization push that opens borders to some citizens but keeps others at bay. Technology is singled out as an agent of this discrimination; tellingly, the suite’s title segment begins with the couplet “These digital ill pixilated chips / Are sick, I find no rhythm in their paint.” Elsewhere, an Ivory Coast expatriate wryly describes herself as a “passer-by who is passed by / A cacophony of rituals” at Paris’ Charles de Gaulle.

The great success of In What Language? can be measured by the seamlessness with which Ladd’s verse meets Iyer’s music. The strength of their collaborative efforts can hardly be overstated. On “The Density of the 19th Century,” Iyer’s score begins as a mechanical drone and then segues into a tense pedal-point section, which in turn erupts into a splash of frenzied breakbeats. By itself it would be an interesting experiment; with spoken-word passages by Ladd, Allison Easter and Latasha Diggs it becomes nearly epic. Meanwhile, “TLC” matches Ajay Naidu’s Bombay vernacular with a synth-pop drum track that illuminates both the tension and the humor of the piece. And “Security” matches the ominous words of “the gatekeeper” with a dark trip-hop passage worthy of Tricky (and expertly tweaked that way, it should be noted, by engineer Scotty Hard). The marriage of sound and word are so complete that it becomes impossible to imagine one component of the project without the other.

More than anything, In What Language? signals a culmination of Iyer’s vision. The music he presents here-groovy and shape-shifting, slippery yet concrete-amounts to a tour de force, with sharp contributions from Mahanthappa, trombonist-cellist Dana Leong and guitarist Liberty Ellman, among others. Steeped in the language of South Asian and pan-African culture but trafficking in universal impulses, the suite fulfills not only the dictates of its premise but also the actualization of Iyer’s fascinating and still-evolving conception.