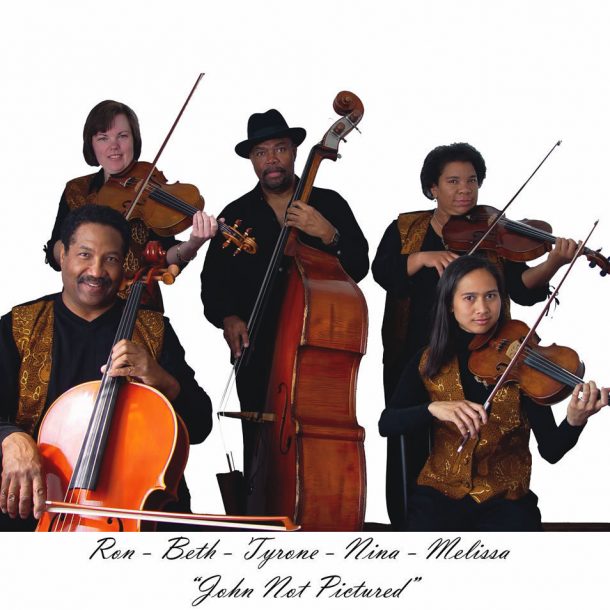 Tyrone Brown knows all the ins and outs of traditional jazz. After all, he’s played bass with Dizzy Gillespie, Clark Terry and Nat Adderley, among others, and he toured and recorded with the Max Roach Quartet for 19 years. But it was a solo concert that brought him the opportunity to record as a leader, and he used that opportunity to explore a novel sound: a string ensemble, led from below by Brown and augmented by percussion.

“I had the honor of being booked to perform a solo bass concert at the Moers Jazz Festival in Germany in May of ’96,” Brown says. “The director of the festival and president of the Moers record company, Burkhard Hennen, was impressed and offered me a recording contract. He, however, felt from a business perspective that Americans are not musically sophisticated enough to appreciate a solo bass recording. So he asked if I had any ideas that would give the CD a little more variety.

“I had been doing school concerts and lectures with a classical string quintet at the time, and the idea came to me immediately to include them on a few arrangements, and Burkhard liked the suggestion. Since all the players had classical backgrounds, the idea also came to me to bring John Blake onboard to share the improvising role.” Brown’s various string ensembles, with slight changes in personnel, have now released four albums. The latest, Between Midnight and Dawn (Dreambox), features a string sextet (two violins, two violas, and a cello in addition to Brown’s bass) and 10 original tracks.

Typically on Between Midnight and Dawn, the percussion sets up a groove down low and Brown’s bass walks briskly while the other strings sustain chords; the contrast between static upper voices and fast-moving bass creates an exciting tension, and solos add a third unpredictable element. (Though only Brown and jazz-violin veteran Blake improvise, the other players play written-out solo passages with flair and handle their jazz harmonies and rhythms adeptly.) Other times, Brown takes advantage of the multiple melody instruments at his disposal by indulging in classical-style counterpoint that uses jazz harmonies, and he throws in a few Latin rhythms for good measure.

Two tracks on Between Midnight and Dawn showcase the array of effects Brown can achieve with his ensemble. Brown says “Her Majesties Danze” sprang from a performance with harpist Gloria Galante: “On one particular occasion when we were required to wear formal attire, I looked over at Gloria and her gown, the gold harp, the graceful movement of her hands on the strings, and I got the vibe of a queen’s ball. I found myself humming lines on my way home while still focusing on the moment and wrote the piece during the course of the rest of the evening.” On the track, violin and cello intertwine to introduce a melody harmonized with an archaic sound; then an uptempo vamp lifts it before the song returns to where it began.

In “Uzuri,” Brown places a gorgeous balladlike melody (the title is Swahili for “beauty”) in a bed of overlapping arpeggios in the violas that sound like eternity; his plucked solo in the middle only makes the return of the melody (and its accompaniment) that much sweeter. Like much of the rest of Between Midnight and Dawn, both tracks use the unusual resources of the ensemble and influences from all kinds of music to make something both immediately appealing and uniquely Brown’s.