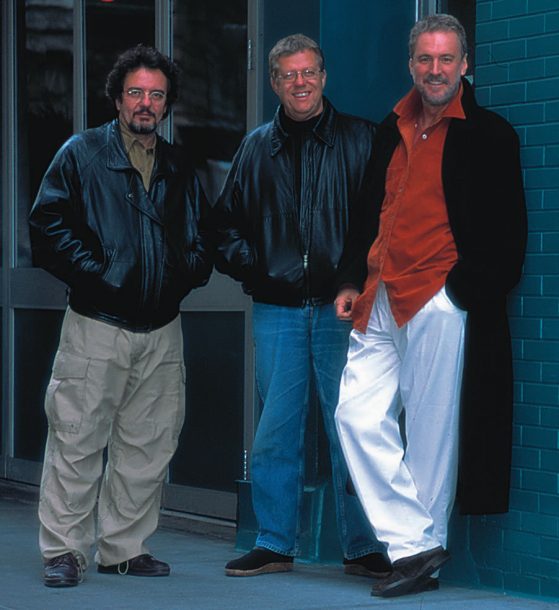 “They are three of the greatest musicians I’ve ever worked with. They are natural, melodic and truly nice guys,” says pianist Kenny Barron when quizzed about his recent association with Trio da Paz.

Those three nice guys, guitarist Romero Lubambo, bassist Nilson Matta and drummer Duduka Da Fonseca, have been making music together in one form or another since the mid-’80s when Lubambo and Matta arrived in New York City, where Da Fonseca had already established himself as a very-much-in-demand rhythmist for the likes of Herbie Mann, Dom Salvador and Antonio Carlos Jobim.

“Duduka introduced me to some guys he was working with and they invited me to play too,” recounts Lubambo, whose session work now includes dates with Dianne Reeves, Diana Krall and his wife, Pamela Driggs. “A bit later, we all started playing in Duduka’s basement for fun and Nilson said it felt very peaceful when the three of us played together, so that’s where the name came from. Paz is Portuguese for peace.”

“The Trio has a style which is very Brazilian, very energetic,” Lubambos says. “We all know how to improvise in a jazz way, but we were all born with that Brazilian thing in our blood so we achieve a very tight, intuitive sound with lots of interplay. We choose songs with beautiful melodies and great harmonies which we can interpret in our way-tunes that work well in our language of jazz mixed with Brazil.”

Trio da Paz has just released its fourth recording, Café (Malandro), with appearances by Dianne Reeves, Joe Lovano and Cesar Camargo Mariano. Plus, Da Fonseca recently released his first solo effort, Samba Jazz Fantasia (Malandro), Matta is working on his own disc and Lubambo has a new star-studded Q Records release under his belt, Rio Wave/Brazilian Nights, produced by Jason Miles and featuring Michael Brecker, Jane Monheit and Gato Barbieri, just to mention a few, and is releasing another solo project this summer for JVC in Japan. “We have work scheduled with Kenny [Barron] for the next two years,” confirms Da Fonseca, “we are all grateful to have so much work coming in now.”

Trio da Paz? Sounds like the only peace these three will find from now on will be those special moments on stage, spiraling together, their magical synergy infusing them with an inner tranquility achieved only through music.