Skip to content
Become a member and get exclusive access to articles, live sessions and more!
Start Your Free Trial
Home > JT Archives > Trio Beyond: Saudades 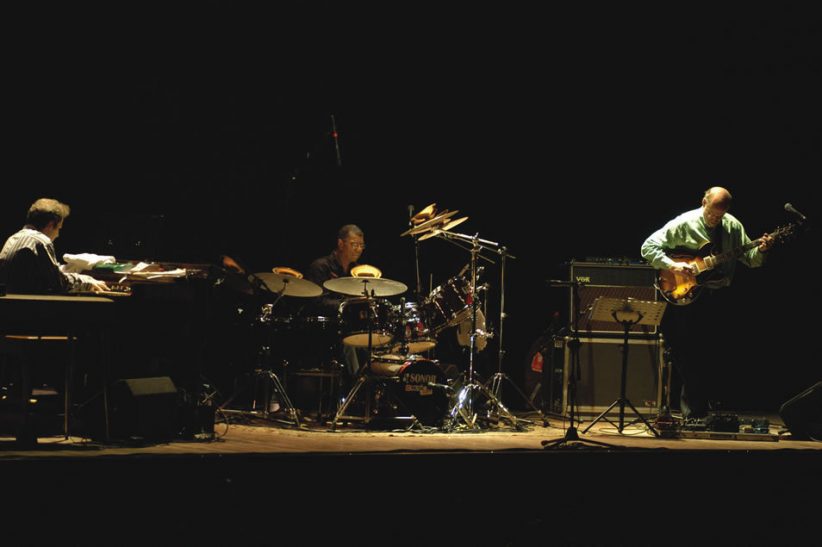 According to leader Jack DeJohnette, Trio Beyond is based on the Tony Williams Lifetime, a pioneering outfit that, like fusion itself, spanned the gamut from rough and raging to slick and simmering. DeJohnette, of course, is well versed in the period: In 1969, he replaced Williams in Miles Davis’ band-just in time to record Bitches Brew. Yet the drummer’s take on Trio Beyond, which also includes guitarist John Scofield and keyboardist Larry Goldings, is somewhat misleading. Throughout the electric-jazz era, drummer Williams used the Lifetime moniker for a variety of lineups, the first and most famous of which featured guitarist John McLaughlin and organist Larry Young. It’s that Lifetime-and not later, less celebrated versions-that DeJohnette honors on Saudades, Trio Beyond’s double-disc debut.

Granted, the trio dabbles in some Williams-era Miles (“Seven Steps to Heaven,” “I Fall in Love Too Easily” and “Pee Wee”), opens with a Young-associated tune written by Joe Henderson (“If”) and dips into two tracks (“Big Nick” and “Allah Be Praised”) from 1970’s Turn It Over, Lifetime’s Jack Bruce-augmented sophomore release. In terms of sound and performance, however, the London-recorded Saudades is nothing if not a paean to 1969’s Emergency!, Lifetime’s sprawling, double-LP debut. MC5-influence aside, that album-the only release to feature the original Williams-McLaughlin-Young lineup-is steeped in hard-boppin’ organ-trio music. And that’s the track that Trio Beyond takes throughout this 2004 concert.

In other words, this stuff is more Back at the Chicken Shack than Birds of Fire. Scofield, for starters, is a mellower, less showy string-bender than an Emergency! facsimile would require. The guitarist’s playing is both Grant Green-rustic (the trio’s own “Love in Blues”) and Sonny Sharrock-ragged (album closer “Emergency”), but he never throws out the kind of knotty, verging-on-superhuman lines that were McLaughlin’s trademark circa Lifetime. Likewise, Goldings is a bit too studied, and safe to summon Young’s Coltrane-of-the-organ spirit. His ebony and ivory tinkling, for the most part, recalls an era before anyone thought to use “avant” as prefix. And even his psychedelic sampler work suggests the all-white coolness of today’s IDM-techno rather than the street-fightin’ agitation of Lifetime’s original context.

DeJohnette, too, is in hard bop mode throughout. Those who’ve digested Miles’ recent The Cellar Door Sessions 1970 box set are no doubt familiar with the drummer’s baroque, almost impenetrable funk (funny how five versions of “What I Say” will do that). Here, by contrast, DeJohnette is especially restrained and straightforward, saving up his brainiest outbursts for the occasional unaccompanied moment that must be the due of any drummer working rep (see: “If” and “Big Nick”). He’s nowhere near as maxed-out as Williams on Emergency!-and, thank goodness, he doesn’t sing. Instead, DeJohnette splits the difference between the ham ‘n’ eggs that led up to Lifetime’s point of departure and the boppish intricacies of fusion’s waning years.

Truth be told, all of this is a lot more enjoyable when you-gasp!-ignore the concept. Williams deserves his due; he’s one of the greats. And the band is more than competent as a Lifetime covers act. It’s just that, at its best, Trio Beyond proves its mettle deep in the heart of its improvisations, not in the midst of the written material. Pick up halfway through the trio-penned title track, an arty bit of go-go funk that owes little to Lifetime, and you’ll find an up-to-the-minute group giving new life to a traditional format. That this is the best performance on an album devoted to Williams might seem like some kind of failure-especially to those looking for a nice stroll down memory lane. Yet, Saudades is a purer distillation of Lifetime’s spirit than anything Trio Beyond could’ve cooked up from a songbook. If that ain’t respect, I don’t know what is.