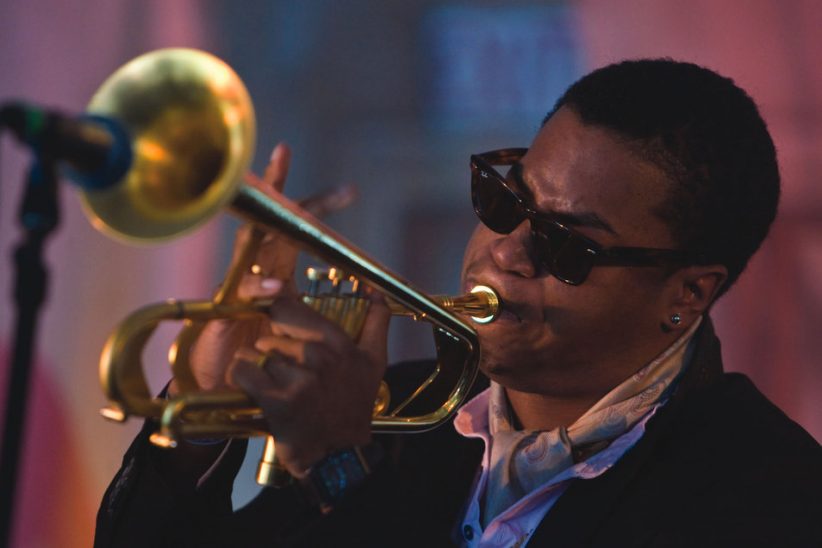 If you’ve ever wanted to stage your own personal jazz fest, visiting the annual Tranquility Jazz Festival might stave off the impulse. The BET-sponsored event, which recently presented its sixth edition, takes place on Anguilla, an island in the British West Indies where isolation is the most valuable commodity. It’s the sort of niche vacation locale where well-heeled visitors can rent a personal paradise, and the jazz festival, with intimate outdoor venues and attendance numbers of a few (or even couple) hundred per show, follows suit. The four-day-long event carries a tag of “Straight, No Chaser” to differentiate it from other Caribbean events that are, by and large, dedicated to jazz in name only. The 2008 edition included headliners Patti Austin, Arturo Sandoval, Dee Dee Bridgewater, Christian Scott, Michel Camilo and Dean Fraser.

Performing from her For Ella recording in a scaled-down quintet format (that album featured Germany’s mighty WDR Big Band), Austin nodded to the First Lady of Song in varied ways-in repertory, technique (her range and scats were clearly modeled in Ella’s image) and charisma. Far away from the polite chuckles that typically meet stage banter, Austin, who appeared thin and radiant, elicited bona fide guffaws from her audience. Riling the crowd’s state of post-election jubilance, she cracked, “[Obama] could be in office for four years and we’ll still be saying, ‘He’s the president!'” She jokingly blamed “that bitch” Diana Krall for For Ella’s Grammy loss in 2002, and quipped that the Canadian singer-pianist was “probably a Republican.” In an act of soul-baring disguised as self-deprecation, she lamented how showbiz can consume a woman’s personal life, before comforting herself with a pithy conclusion: “We [women] don’t care about marriage; we only care about the wedding.”

But the music, not the comedy, made Austin the arguable festival highlight, and she delivered dynamics in spades: “Honeysuckle Rose” was beautifully lax, calculated and restrained in its swinging drift, with coy, trombone-like scats. “You’ll Have to Swing It (Mr. Paganini)” moved from rubato to swing and finally into a deliciously sleazy burlesque-blues stomp. “Our Love Is Here to Stay” provided an exhibition of Austin’s outsized abilities in ballad mode.

The boldest moments of the festival came, unsurprisingly, from 25-year-old, New Orleans-raised Christian Scott, whose performance aesthetic is split between that of a handsome entertainer and the quintessential Angry Young Trumpeter. At Anguilla, he tried in earnest to have it both ways, and the results resembled a highly stylized personality crisis. At a festival that caters so overtly to vacationers, Scott played a set of willfully glum material from his Concord full-lengths. At its most engaging, Scott’s music deftly compiles the sentiments of modern indie-rock and soundtrack music, the sonic palette of fusion, the muscle of a hotshot NOLA trumpeter, and the interactivity of a working, traveling young group. (Guitarist and musical director Matt Stevens, who borrows Kurt Rosenwinkel’s liquid scat-and-pick technique without really ripping it off, is a player worth keeping an eye on.)

At its worst, Scott’s music is ECM gone awry-artificially moody; heat without light. The trumpeter’s split persona was made even plainer between songs: Scott explained how one composition was written for a friend who died tragically in New Orleans at the hand of the police; he also mentioned his Grammy nomination for 2006’s Rewind That more than once.

In Scott’s wake, trumpet virtuoso Arturo Sandoval reignited the party vibe, with goodtime Latin bombast that included some winsome diversions. Most of those surprises relied on Sandoval’s abilities as a keyboardist: On some up-tempo groovers, Sandoval played labyrinthine lines on a synthesizer affected to sound like a rock guitar (on the heels of the Return to Forever reunion tour, one couldn’t help but be reminded of Chick Corea). In a spotlight on acoustic piano, he performed a masterful tribute to the late Oscar Peterson, titled simply “Oscar,” that included eerie impressions of Peterson’s elegantly technical dazzle. It was difficult not to feel sympathy for Tony Perez, the band’s regular pianist.

The Dominican pianist Michel Camilo’s profile has shrunk in jazz in the last decade, and seemingly for no good reason. Under Camilo’s tutelage, a trio with bassist Charles Flores and drummer Cliff Almond connected Latin rhythms with postbop’s harmonic acumen and a conservatory-bred technical ferocity. Today there are several Latin-born composer-musicians, some of them winning major cultural awards, who seamlessly combine ethnic rhythms and heady modern jazz, and Camilo might be considered a forebear of that ideal. “From Within,” with its powerhouse temperament and serpentine sections, came off like some Latin-ized acoustic prog-rock epic. “Repercussions” followed a similar trajectory, with breakneck fusillades, quickening unison lines and an overall bravado that brought to mind the Bad Plus (especially drummer Almond-filling in for Cuban phenom Dafnis Prieto-whose hard-hitting polyrhythmic and metric wizardry evokes Bill Stewart and David King). But so much excitement can grate an audience, giving set-closer “My Secret Place” added importance: It provided a well-needed comedown while making obvious Camilo’s dual expertise in jazz and classical fields.

If Camilo’s set was surprising for its sheer strength, vocalist Dee Dee Bridgewater’s performance was nearly baffling for its goofiness. A month prior, at Washington D.C.’s Duke Ellington Jazz Festival on the National Mall, Bridgewater was astounding: She commanded a sizable pan-cultural ensemble that included the Guinean vocalist Kabine Kayoute and balaphone player Lansine Kouyate through material from her much-acclaimed Red Earth. Stripped of such players at Anguilla but joined by comrades Edsel Gomez and percussionist Luisito Quintero, Bridgewater dutifully tackled Trane-associated material like “Afro Blue” and “My Favorite Things,” as well as Nina Simone’s “Four Women.” The problem was the overlong, rambling spoken bits between tunes, where Bridgewater flirted like a sex kitten, channeled a Jewish-mother character, and generally inspired uneasiness among those familiar with her. (Knowing Bridgewater’s impressive stage credentials, you’d think these theatrics could only complement the music; they didn’t, and instead created real distractions.) A closing blues jam, chosen off the cuff as the encore, was fun if anticlimactic.

The set was a sprightly and fun, and yielded a promising discovery: Playing with Fraser was an Anguilla-based guitarist named Ruel Richardson, a native Caribbean, self-taught and in his early 20s, with an intuitive feel for riddims, an impressive grasp of traditional jazz-guitar phrasing, and great tone. In a chat following his set, he cited influences ranging from Earl Klugh and Lee Ritenour to Wes Montgomery and Joe Pass, but his sensibility best resembled that of Jamaican guitar legend Ernest Ranglin. He’s traveled to the States but hasn’t played there, and has a recording on the way. With jazz’s increasing reputation as a skill set that can only be acquired via slick music schools and pricey private lessons, Richardson’s chops were refreshing.