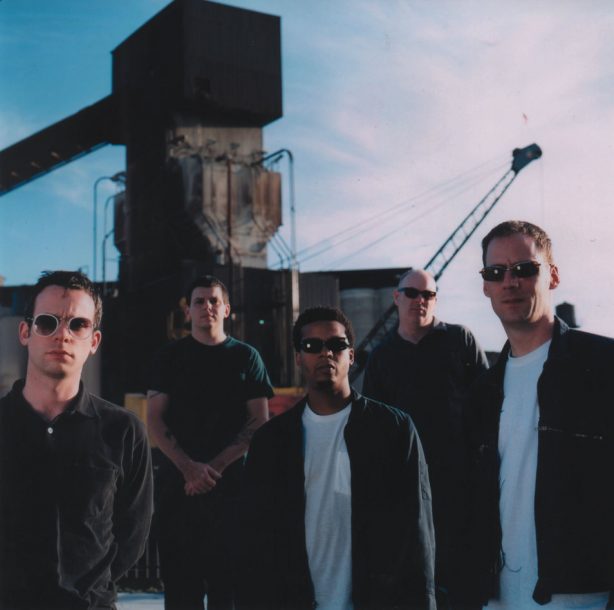 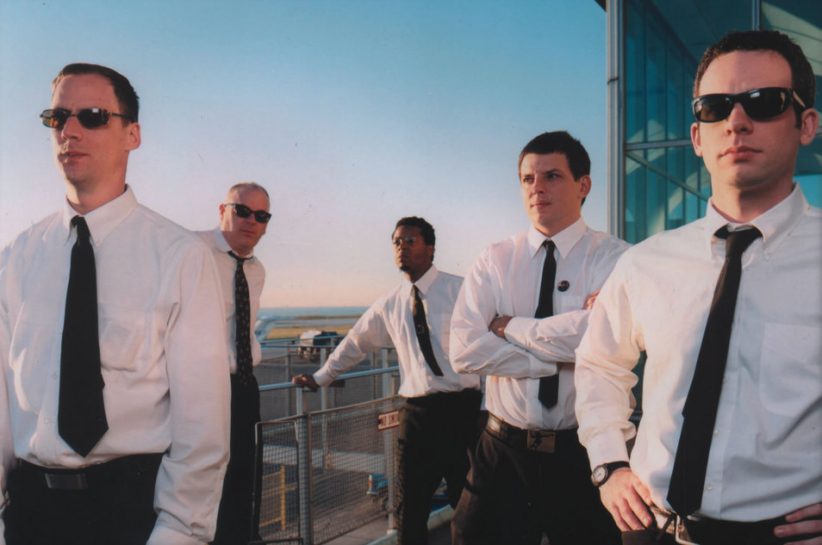 Musicians have always mixed stuff,” insists Tortoise guitarist Jeff Parker. “Listen to the old beboppers; you can hear the Bach in Charlie Parker’s lines. But to me music is just music.” It requires only a cursory glance at Parker’s discography to discover that that’s no random boast. Like his bandmates in Tortoise-the nearly decade-old Chicago instrumental band frequently dubbed the world’s primo postrock outfit-Parker is awash in diverse musical activity, juggling full-time membership in no less than four groups: Tortoise, groove experimentalists Isotope 217, AACM stalwarts New Horizons Ensemble and jazzy stylistic cross-cutters the Chicago Underground Quartet.

Tortoise had its 1990 genesis in an experiment called Mosquito between bassist Douglas McCombs and percussionist John Herndon, two seasoned vets of the city’s edgy rock scene. Since then, Tortoise has long acted as the popular axis in Chicago’s rich and dazzling creative music orbit. Its multi-instrumentalist members, which also include drummer/keyboardist/producer John McEntire and percussionist/keyboardist Dan Bitney, play in numerous other contexts, but Tortoise’s role as a musical hub is more philosophical than physical. In a scene where musicians blend styles and sounds as nonchalantly as folks add cream to their coffee, Tortoise is the ultimate group of sound miners, collating an ever-growing bounty of approaches, traditions and techniques to create a spread that makes complete sense of its sprawling ingredient list. For musicians born in the rock era it’s no longer a big deal to draw from so many traditions, and any musicians who refuse to limit themselves to pop-rock’s narrow confines are in some sense postrock, a term the members of Tortoise bristle at.

“You have so many different kinds of music here and so many great musicians that if you’re open to all of that then naturally it’s going to come out in the music you make,” says Parker. Dub, Morricone’s spaghetti-western twang, electronica’s programmed beats, Steve Reich-style minimalism, Brazilian rhythms, abstract electronic soundscapes and jazzy timbres are just some of the elements a listener will encounter in the group’s work, but compiling such a list doesn’t do justice to Tortoise’s seamless mixtures. The band’s music has never sounded particularly self-aware of its own makeup, but on Tortoise’s new, fourth album, Standards (Thrill Jockey), the quintet has achieved such a stunning coherence that discussing individual components becomes an exercise in futility.

While Tortoise does not play jazz per se, the group’s bold assimilationist m.o. fits comfortably within a large segment of Chicago’s musical lineage. More than three decades ago an organization called the Association for the Advancement of Creative Musicians designed its own mechanisms to present original music outside of the jazz mainstream, from the mix of styles right down to where they performed it. That sort of progressive style-blending has always been endemic to jazz, but during the ’90s Chicago rock-based groups like Tortoise, Gastr del Sol and Shrimp Boat embraced those ideas for their own means; for them jazz wasn’t the foundation, but another vital possibility. Purity has never been an issue for these bands and their fruitful Chicago offspring-The Sea and Cake, Brokeback, L’Altra, Directions in Music, Daniel Givens, The Eternals, Joan of Arc and Storm and Stress, among them-where players from the city’s bustling free-improv scene often jam over electronic beats and guitar noise or play charts for dreamy pop melodies.

Tortoise has long been one of the most sophisticated, accomplished practitioners of this polyglot approach. The group’s eponymous 1994 debut was filled with overlapping basslines, gentle polyrhythms and evocative melodies, but it wasn’t until the band’s 1996 follow-up, Millions Now Living Will Never Die, that Tortoise began working on a level of experimentation with structure and sound that marks their music today. Although the album’s 20-minute patchwork centerpiece “Djed” ultimately collapsed under its own weight, it nevertheless indicated the band’s interest in discovering new ways of connecting disparate material. Thanks to McEntire’s masterful desktop production the band’s next and most ambitious album, 1998’s TNT, all of which was recorded and arranged on computer using the Pro Tools program, the band transplanted its very organic music into the virtual realm.

“For TNT we had lots of ideas that were small but solid,” says McEntire. “That’s usually the way we work; someone will have a melody or some chords, a rhythm or a sound and we’ll build up from there.” The band laid down loads of material in bite-size chunks and then arranged, tweaked and manipulated those fragments into full-blown compositions on the computer, ostensibly using a mouse to explore how things flowed and juxtaposed. When the band prepared to tour in support of the album it had to learn the songs, none of which they’d ever played together as a band, from the record. The live versions of those songs were typically stripped down from the multitracked album renditions, and certain computer-enhanced rhythms were impossible to replicate live.

Following a year of steady touring, which included a brief stint as the backing band for legendary Brazilian tropicalismo Tom Ze, the band members retreated into various other projects: Parker into his groups, Bitney and Herndon into Isotope 217, McCombs into his twin-bass project Brokeback and McEntire into The Sea and Cake and his own Soma Electronic Music Studios, where he recorded albums by Stereolab, High Llamas and Smog. “I think breaks are good,” says McEntire. “If it hadn’t been three years [since TNT] we wouldn’t have made the record we did. It would have been a lot different than something we would have made right after that tour. I think what really makes it work for everybody is that there are so many different things going on. Even though they’re all consecutive, just being able to make those transitions is enough to keep it fresh.”

But with the rather incestuous nature of Chicago’s music scene, where players routinely turn up on each other’s recordings, does such overlapping activity ever threaten the identity of a particular project? McEntire thinks not: “Everybody is writing more now than they ever have, and whether it ends up in Tortoise or another project is sort of a moot point because of the way things change when we start to work on it collectively, to give it a life of its own even if it does have a compositional signature.”

“The music in [Tortoise, Isotope 217 and The Chicago Underground Orchestra] is so different, so whatever it is in one particular situation is what it is,” adds Parker, a prolific composer who claims that the tunes he brings to Tortoise were written specifically for the group. He says he creates countermelodies or basslines according to the group’s personality, like the way Duke Ellington wrote around the distinctive personalities of his band.

When the band reconvened to make Standards last year it consciously adapted a different approach than the one used on TNT. “We wanted to make sure we didn’t fall into the rut of TNT,” says Herndon, “which was recording sections and then arranging it all on the computer. That happened a little bit here, but everybody had the idea of making decisions quicker.” McEntire acknowledges that the band was interested in making a more concise album than the occasionally unfocused 65-minute cornucopia of TNT. To that end Tortoise spent several weeks rehearsing new material for the album before entering the studio.

“There’s still a lot of computer work involved on Standards, but I think there was a much more diversified approach in general,” says McEntire. “There was a lot more material that was closer to being finished compositionally then on the last record. There were probably only a couple of things that were just one-at-a-time overdubs done on the computer.” In addition, the quintet took a short break in the middle of the recording process to test the new material out in a live setting, playing five small-club gigs under the moniker Wood Cult. “It allowed us to see how things were working, how stuff might be mixed or what parts might be added. The stuff on this record is better-suited for live performance than some of the stuff on TNT.” Indeed, the music on Standards sounds like the product of a working live band more than anything Tortoise has done since its debut.

McEntire’s beautifully rich, highly detailed recording, which fully captures the subtle nuances of everything from guitar tones to electronic squiggles, helps the quintet realize a dublike methodology on its new material. Time and time again hooky little riffs and patterns are patiently developed and recontextualized. The soulfully elegiac “Monica” is essentially built from a pair of simple but complementary melodies, but by dropping various elements in and out of the mix and shading those two hooks with fragmentary inversions the nearly seven-minute gem is filled with delightful surprises and textural twists. That kind of orchestral theme-and-variation approach is the album’s startling constant, whether it’s production tricks altering the landscape or a constant shuffle of disparate voicings, as on the barrage of melodic restatement on “Blackjack.”

While Standards may be the band’s most organic-sounding record and the one that best reflects its polyglot tendencies, Tortoise’s place in the Chicago scene has never seemed tenuous. “Time is tighter than ever and touring is the biggest reason,” says McEntire. As with well-known Chicago peers like Ken Vandermark, Rob Mazurek and Jim O’Rourke, they’ve become sought-after international acts. The constant roadwork keeps Tortoise from interacting with players outside of its direct circle as much as it used to, and Herndon admits that he feels bad that he’s less aware of what’s happening locally. But the band’s aesthetic and working methods are inextricably linked to the city’s vibrant scene and if their body of work isn’t legacy enough, its broad-minded approach certainly is not only for Chicago, but wherever musicians ignore the invisible boundaries between styles.