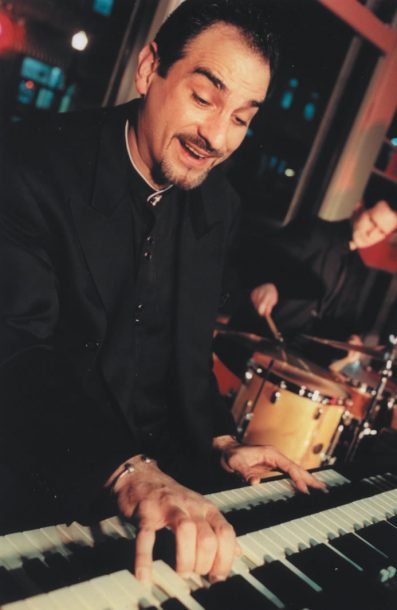 That B-3 cooker and bluesy singer Tony Monaco has released two CDs-the self-explanatory Burnin’ Grooves and the more varied Master Chops T, both for Summit-in the past seven months isn’t remarkable. But the fact that he can play the B-3 or sing at all is remarkable: As a 15-year-old accordionist, Monaco contracted a debilitating illness that destroyed nerves in his arms, torso, legs and throat.

“The disease is very closely related to polio-called neuralgic amyotrophy, meaning atrophy of the nerves,” says the 42-year-old Monaco. “It begins with severe pain for about two to three weeks-while the nerves are being destroyed by this virus, no pain pill seems to work and it feels like you’re on fire!-followed by weakness. Sometimes there is partial recovery of the nerve affected, sometimes there is complete atrophy where the nerve stops functioning all together. My right shoulder, triceps and deltoids were affected first. I still can’t really lift my right arm above my head-there was a lot of permanent damage-so it gets hard for me to hold my arm out for any length of time. Six months later my left shoulder, triceps and deltoids were affected. I did, however, gain some strength back in those areas. The only treatment is mass doses of steroids to reduce inflammation and hope for minimal damage and of course pain pills for some relief. After these first episodes, my dad bought me my B-3, because it hurt to have the accordion straps over my shoulders.”

But Monaco’s bout with the disease wasn’t over: it punched him again when he was 35.

“This one was one long messy ordeal affecting nerves in my left vocal cord, both ankles, my left and right forearms. On this attack I developed chronic pain because of all the nerve damage. My vocal-cord nerve never recovered, and I ended up having throat surgery where they filled the dead vocal cord with fat to straighten it up close to the midline so that I could talk,” he says. “I had permanent damage and surgery to my ankles. I now use a cane when I have to walk far because the supporting muscles around the ankle give out after a while. My left forearm was also permanently damaged. I couldn’t even play left-hand bass. There is always a chance that it can return, so I play every day and am truly grateful for each of these days.”

Monaco’s gruff-but-likeable singing voice isn’t going to win any talent contests, but the fact that he can sing at all is noteworthy.

“In order to sing again, it took about a year of practicing and hitting the wrong notes to relearn how to hit the right ones,” he says. “I would go to sing a note as if there were both vocal cords and I would always be off key-besides the fact that it hurt.”

Twice Monaco has had to go through the agonizing process of teaching himself to play again, retraining various destroyed muscles for hours on end. But because of spending so much time at the keyboard he has managed to become a real master of the B-3-an instrument with not a lot of give. Monaco tamed the savage B-3 beast, however, with energy, passion and wit on last fall’s Burnin’ Grooves and with a more refined touch on the new Master Chops T.

“Burnin’ Grooves is more of a ‘Let me tell the world I’m here’ kind of straightahead organ-trio recording, recorded two months after I met [the CD’s co-producer] Joey DeFrancesco,” Monaco says. “It says a lot in terms of organ solos and riffs, using the Hammond as an attack/solo instrument-and it’s all grooving hard. Master Chops T has a different magic. I use the B-3 as the finesse, total jazz instrument, applying it in different styles using different sounds and solo approaches.”

Master Chops T, Monaco’s apt nickname, showcases the B-3 as more than just an instrument to cut loose on during up-tempos.

“I do some traditional organ, guitar, drums, sax-combo blues and shuffles,” Monaco says, “to an acid funk, to a ’60s-ish sidewinder à la funky Austin Powers, to a big band feel vocal of ‘Luck Be a Lady,’ to a smooth journey à la Pat Metheny, to an accordion blues using the organ in back, to a Woody Herman ‘Rhythm’ changes, to typewriter-organ style, bending notes-a secret-to a nostalgic ‘Me & Mrs. Jones’ sung with a horn arrangement similar to the original, to a Caribbean trip on ‘St. Thomas Calypso.'”

That’s quite a varied trip for a B-3 CD, but it’s simple compared to the one Monaco has had to make in his life.