Skip to content
Become a member and get exclusive access to articles, live sessions and more!
Start Your Free Trial
Home > JT Archives > Tony Bennett: In an Ellingtonian Mood 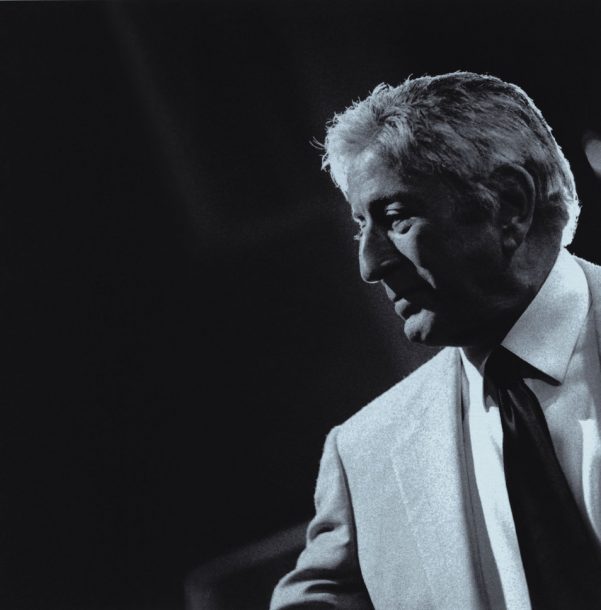 Watching Tony Bennett work in the studio, one gets a revealing glimpse of the craft behind the man’s artistry. Smooth, always poised, ever-confident of his abilities, the 73-year-old singer exudes an uncanny naturalness and gusto in front of a microphone. It’s a quality that he has in common with such other icons in American entertainment as Al Jolson, Bing Crosby, Fred Astaire, and Frank Sinatra.

Bennett is definitely part of that hallowed lineage. A quintessential one-take guy, he has an old school aura about him that carries to the back row of concert halls and touches everyone in the room. Call it magic, pizzazz, charisma, Anthony Dominick Benedetto has got IT. He hits high notes as easily as mortals breathe, phrases a lyric or punctuates accents with seasoned showbiz flair and swings as innately as an honorary member of the Count Basie rhythm section. And he delivers it all with the nonchalance of a lifetime straphanger riding the “N” train back to Queens.

A handful of press people were invited to observe that trademark Bennett magic at The Hit Factory last summer for sessions that resulted in Bennett Sings Ellington: Hot and Cool (Columbia/RPM). A decidedly jazzy outing that ranks with other critically acclaimed collaborations like Tony Bennett/Jazz featuring Stan Getz, Count Basie, Art Blakey and Herbie Hancock, The Tony Bennett/Bill Evans Album and Hometown My Town with Zoot Sims, Al Cohn, Urbie Green and Barry Galbraith, Bennett Sings Ellington: Hot and Cool is a collection of timeless melodies and jazz anthems sung by one of the greatest interpreters of American song. Backed by a quartet led by pianist Ralph Sharon, a colleague for 40 years, and further enhanced by the lush orchestral arrangements of Ralph Burns, this excursion into Ellingtonia is a fitting homage to the great composer in honor of his centennial anniversary.

Guest soloists Wynton Marsalis and trombonist Al Grey contribute some conversational exchanges on “Mood Indigo” and “She’s Got It Bad (And That Ain’t Good).” The trumpeter also adds a strikingly lyrical solo on the album’s lone instrumental, “Chelsea Bridge.” Says Bennett of that riveting performance, “I think it’s the best thing I’ve ever heard Wynton do. He just showed up and played so wonderful. Very melodic and economical with feeling. To me, it communicates more than anything he’s done on record.”

Over lunch at his favorite Midtown Manhattan Italian restaurant, Bennett spoke candidly about his craft and about his boyhood idol Edward Kennedy Ellington.

JazzTimes: It was interesting to see you do two takes of “Caravan” in the studio. Your choices of phrasing were wildly different from take to take. It was a clear case of taking chances.

Yeah, that brings up a point…it’s so hard to explain to everybody but I do have a stock line for it. All interviewers ask me, “Don’t you get tired of singing ‘I Left My Heart in San Francisco.'” But I say, “Do you get tired of making love?” They think I do it the same way every night but I don’t sing that way. Every performance is different. If you do it every night like I’ve done-200 dates a year for 51 years now-then you turn it into a game by improvising all the time. Spontaneous stuff is the most fun. See, if you have fun, then the audience intuitively feels that they were witnessing something that happened just for that moment. I get bored if I hear something that’s set all the time the same way. I think what I’m trying to tell you is I’m not really a jazz singer but I know how to improvise.

JazzTimes: Isn’t that what a jazz singer does?

Yeah, but the whole idea of “jazz singer” is… I don’t know, that’s so much like belonging to a club. As a kid I never joined the Elks or the Knights Of Columbus. I’ve always been a little wary of clubs and I never tried to be part of the club that’s jazz singers. I don’t sing “Satin Doll,” because everybody sings “Satin Doll.” I stay away from that, even though I may enjoy someone else singing that. I’d like to do something a little different.

JazzTimes: Well, you certainly have an affinity for jazz.

Well, sure. Yeah. I’ve always surrounded myself with great jazz musicians, but I consider myself a jazz entertainer. A lot of critics have accused me of trying to be a jazz artist. I’ve never tried to be a jazz artist. I’m a popular singer who sings with an improvised flair. Record companies and record shops, they want to categorize everything. This guy does this, this guy does that. It’s like what Duke used to say about categories: “I’m not a jazz artist; I’m Duke Ellington.” But as an entertainer, the music just becomes a tool for me to entertain people. I like entertaining people. I don’t have this philosophy of, “I do this for myself and I don’t care if anybody likes it or not.” I mean, I do it for everybody. To me, the greatest artists were people like Fred Astaire, Ella Fitzgerald, Judy Garland, Duke Ellington, Count Basie-they were all giving people and they all gave to the audience. They were entertainers. Duke Ellington was an entertainer. Besides being a great musician and great composer, he loved getting in front of a band and swinging the thing out. He loved entertaining people. He also loved to watch them dance.

JazzTimes: I understand that you actually wrote a song with Duke.

I was on the road with Duke in the early ’70s. It was such a phenomenal experience to be with that great band. Anyway, we became very close-his family and my family were close. It was just a wonderful experience to get to know Duke like that. He was so alive. I never met anyone more alive. Every moment was important to him, everything was interesting to him, and creative. So he said one day, “Write a song with me.” I explained that I couldn’t really write words too well but that I sometimes could come up with a good melody. And he said, “If you write the music, I’ll write the words.” So I worked on it. And it took me a month on the road with him to meet Duke’s standards. After a month I just sang out a melody to him, he listened for a moment and said, “That’s Cootie Williams.” I had lifted a riff from a Cootie Williams solo and didn’t even know it. I thought it was my idea. Over the years, I had forgotten about that tune. Then when I was getting this Ellington project together, Will Friedwald, who wrote my autobiography with me (The Good Life, Pocket Books), gave me a whole bunch of Ellington tapes to check out. One of the tunes I came across was this thing called “Be Cool and Groovy for Me,” and the composer credit reads: Duke Ellington-Tony Bennett-Cootie Williams. I had no idea that I wrote the song.

JazzTimes: You’ve got some good stories in your book about Ellington. What were your earliest first impressions of him?

He looked regal, dignified. Strictly a great man. I saw him as a teenager at the Capitol Theatre with Ethel Waters. I played hooky with some friends to go see him. We used to play hooky, go see Frank Sinatra at the Paramount, Count Basie. 52nd Street was happening. Oh, it was a great time. Anyway, Duke opened up with a dolly set, which was real popular at that time. Curtain opened up and it was like everything was hanging in space. Amazing!

JazzTimes: You had already known about Duke at that point and heard him on record?

Oh yeah. My brother John was a big jazz fan. He knew all the early guys like Phil Napolean and Bobby Hackett, who played down in the Village then. I was always impressed with my brother’s musical tastes. So you get into it, you know?

JazzTimes: I was amazed to read in your book the anecdote about Ellington being dropped from Columbia.

Yeah, Clive Davis came up to Duke and said, “Mr. Ellington, we have to drop you from Columbia because you’re not selling records.” And Duke said, “Well, I think you have it turned around. I write the music; you’re supposed to sell the records.” He had an answer for everything. That’s another thing I loved about him. His mother taught him that he was very, very special and it really stuck with him. His belief in himself was wonderful. He would tell me, “No matter what accolade anyone may give me, I think more of myself.” I never heard anybody say that before.

JazzTimes: So, long before all these power of positive thinking gurus came around, Duke was already there.

Yeah, he was always ahead of time.

JazzTimes: And his influence went way beyond music. People were influenced by his fashion sense as well.

And philosophy too. He believed in love. That was the big axiom for him-love. He said the most important realization in the world is that God is love. That was his thing.

JazzTimes: That’s why that painting you did of him (“God Is Love”) is so appropriate.

Yeah. Well, the reason for that was, he would always send me flowers when he wrote a song. I’d get a flower and know, “Oh, Duke wrote another song.” So that’s why I put those flowers behind him in that portrait.

JazzTimes: You must’ve gotten a lot of flowers.

Yeah, he wrote a lot. A lot of people don’t know that he wrote more music than any composer in the history of recorded music. Duke was the most prolific musician that ever lived. He wrote in every kind of mode-ballets, sacred concerts, fugues, every mode of music possible-classical, solo piano, movie scores-everything.

JazzTimes: Do you have a favorite Ellington album?

Ellington at Newport (1956). My God…that thing just takes off. It’s the most incredible thing to listen to. It just flies. Paul Gonzalves playing all those choruses (on “Diminuendo and Crescendo in Blue”) and the people going nuts. It’s just incredible. Duke is like Stravinsky. Whatever you hear of his sounds good.

“I love Bill Evans Trio with Symphony Orchestra on Verve with Claus Ogerman arranging and conducting. I could play that all day long. I also love Dave Brubeck and Jimmy Rushing (Columbia), a wonderful vocal album. Of course, Art Tatum. I’ve been playing Tatum records for years. Also, I listen a lot to the Debussy string quartets, Bartok, Stravinsky and Bach.”