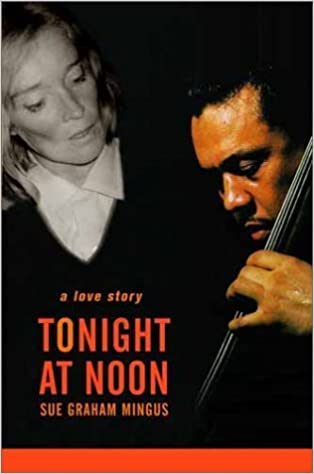 The cover of Tonight at Noon by Sue Graham Mingus

Charles Mingus was in many ways bigger than life, so his fate at the hands of a degenerative illness seemed particularly cruel. His descent was both rapid and terrifying. Immobilized and confined to a wheelchair or bed, he died in 1979, less than 14 months after being diagnosed with Lou Gehrig’s disease. This book, named for the topsy-turvy schedule of the working musician, is the autobiographical story of his widow Sue Graham Mingus and their life together. The subtitle should signal readers hoping to learn about Mingus’ music to look elsewhere—the fine biographies by Brian Priestley or Gene Santoro, for instance. There is much to enjoy about this book, however.

In sharp contrast to Mingus’ hardscrabble background, Sue Graham came from a well-to-do family, not without its own dysfunction and tragedy—a brilliant but inscrutable father, and a mother who died when Graham was at college. Graham’s nonconformist career path (theater, film and journalism, all of the countercultural variety) eventually brought her into contact with the famed jazz musician, who had already been married a few times when they met. Graham deftly illustrates the contrast between the seemingly mismatched pair by describing a visit to a fortune teller. “Your natures are both very strong,” she told them. “You could have an extraordinary relationship if you used it properly. Or else it could be destructive.” The early stages of their relationship do seem more like sparring than courtship, and Graham makes their coupling seem both improbable and inevitable.

They were more than husband and wife. Shortly after moving in together, Graham assumed business responsibilities for Mingus’ career and, in her words, “business with Mingus was a blend of theatrical derring-do, frequent time-outs, fits of brilliant imagination and constant creative trouble.” Nonetheless, the personal and professional bond they forged has lasted over 20 years after his death, as Graham has tirelessly kept Mingus’ legacy alive through the Mingus Dynasty, Mingus Big Band and other related projects.

Anyone wondering how or why a widow’s story could be inspiring need look no further than John Bayley’s Elegy for Iris, coincidentally structured similarly to Tonight at Noon. And, just as many people were surprised by Bayley’s gifts as a writer, I was unprepared for Graham’s evocative and graceful prose style. Personal stories like this seem on the surface to be the easiest to write, but in the end are the hardest to do effectively. There is after all something uneasy about a surviving spouse divulging grim details about the terminal illness of his/her famous partner. Yet the narrative really doesn’t fully engage the reader until the discovery of Mingus’ illness, roughly halfway through the book. Perhaps it’s because we know what tragic fate awaits and we just want to get there. Or perhaps it’s that feeling of intense intimacy Graham experienced with Mingus. As Graham herself said about caring for her ailing husband, “I was certain only that dying, slow dying, required enormous attentiveness. Everything was new and surrounded by urgency, the focus as sharp and personal and terrifying as when one was a child.”

Her focus is indeed brilliant and acute throughout this riveting book.

Find out more about Tonight at Noon on Amazon