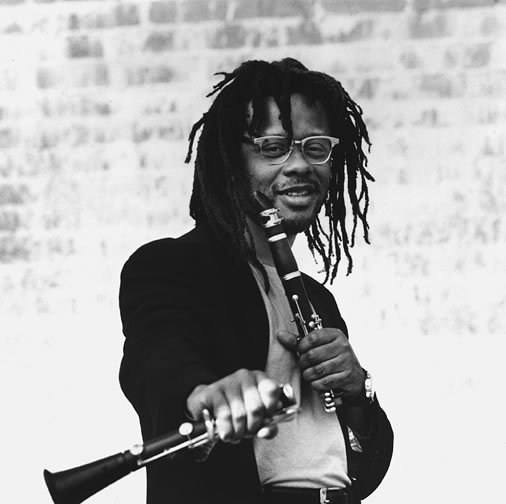 One of Don Byron’s gifts, aside from his open-minded attitude toward music, his incredible facility on the clarinet and his visionary reach as a composer-conceptualist, is his infectious sense of childlike wonder that he brings to the bandstand, whether he’s playing klezmer, Afro-Caribbean, classical, funk or cartoon music. In very charming terms, Byron conveyed his genuine affection for the work of two composers in this “Contrasting Brilliance” concert whose music is often categorized as “difficult.” Of Stravinsky, his teenage hero, Byron wrote in the program notes: “No one has ever sold dissonance so successfully as pure pleasure. It’s a talent that very few musicians have: the ability to make people love your skronk.”

Byron relates heavily to that skronk factor inherent in Stravinsky’s oeuvre. But he is also drawn to the disciplined mind that conceived such demanding and deliberate works as “The Ebony Concerto,” “Septet” or “Concertino for String Quartet,” the latter which he called “my favorite piece of music in the whole wide world.” Byron’s own renegade spirit also relates to the controlled absurdity of Raymond Scott’s novelty tunes like “Powerhouse,” “Siberian Sleighride” and “War Dance for Wooden Indians.” Scott’s oddball music, decidedly Dadaist yet strangely familiar, is the soundtrack for a few generations brought up on Warner Bros. cartoons, specifically Bugs Bunny, Daffy Duck and Porky Pig clips.

In a wildly inventive and invigorating program presented on the occasion of his 44th birthday, Byron nimbly switched back and forth with various ensembles from Stravinsky to Scott and back to Igor again, exhibiting their shared love of dissonance and discipline in the process. The concert opened on an exhilarating note with trumpeters Sycil Mathai and longtime Byron collaborator Ralph Alessi perched in the balcony blowing Stravinsky’s “Fanfare for a New Theatre.” From there Bryon segued to Scott’s rampaging “Powerhouse” (an oft-used theme in vintage Bugs Bunny cartoons) before switching to a snippet of Stravinsky’s “Double Canon for String Quartet,” which was eerily dissonant yet somehow calming. Rather than resurrect well known Stravinsky themes throughout the evening, Byron wisely chose rarely played material, like the four French ditties from “Berceuses du Chat,” written early in Stravinsky’s career (1916) and scored for three clarinets (Byron, J.D. Parran, and Robert DeBellis) and voice (the radiant chanteuse Patricia O’Callaghan).

Other Scott numbers like “War Dance,” a kind of polkafied rendition of “Carmen” and the jivey “Christmas Night in Harlem” were toe-tapping yet rhythmically intricate exercises in disciplined execution by a crack sextet consisting of Byron on clarinet, DeBellis on tenor sax, Alessi on trumpet, George Colligan on piano, Mark Helias on bass and Ralph Peterson Jr. on drums. Stravinsky’s extremely dissonant “Piano Rag Music,” written in 1916 and performed here solo by Colligan, provided a link between the classical world and Cecil Taylor or Jaki Byard while his “Elegy for J.F.K.,” written in 1964, was the composer’s heartfelt paean to a fallen national hero.

The evening climaxed with a 20-piece ensemble performing Stravinsky’s “The Ebony Concerto,” a monumental work composed in 1945 and premiered in Carnegie Hall by the Woody Herman Orchestra. With its radical rhythmic shifting, flood of harmonic ideas and melodies flowing in easy counterpoint to other melodies while surging ahead with an internal forward momentum, it’s easy to see why Charlie Parker dug Stravinsky’s music so.

This “Contrasting Brilliance” show was chockfull of extremely demanding music for the musicians to tackle. And perhaps as a means of letting off some steam after executing such disciplined charts all night, bandleader Byron turned them loose on an impromptu reading of Sly Stone’s “Stand,” performed by an eight-piece ensemble fronted by the audaciously funky singer D.K. Dyson. The tune had nothing whatsoever to do with Stravinsky or Scott, but it sure felt good at that juncture in the program. And after all, it was Byron’s birthday.