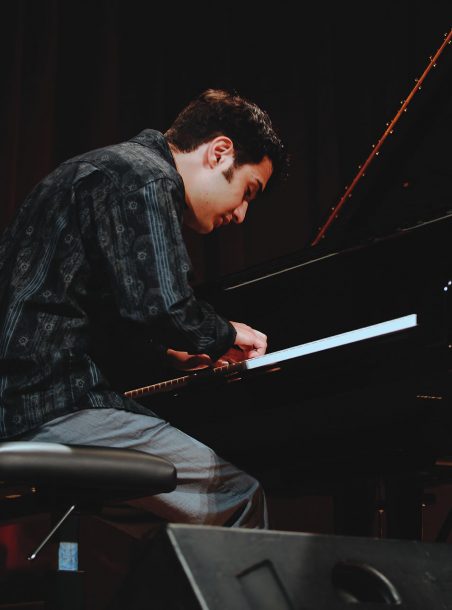 Pianist Tigran Hamasyan was not the most popular finalist in the Thelonious Monk International Jazz Piano Competition held Sept. 17 at Washington, D.C.’s Kennedy Center; at least not with the audience. Fortunately, the Thelonious Monk Competitions have never been a popularity contest and the judges are generally unswayed by the obvious tricks and flashy technique that so often and so easily generate whoops and hollers from fans. That may help explain how Hamasyan, an Armenian-born music student at the University of Southern California, won the 2006 piano competition by taking risks and recasting the standards “Cherokee” and “Solar” in challenging, time-altering ways. For his efforts he’ll receive the $20,000 first prize and a concert at the Kennedy Center next season. The $10,000 second-place prize went to Gerald Clayton, Hamasyan’s fellow student at USC and son of bassist John Clayton. Third place honors and a $5,000 check were awarded to Aaron Parks, currently attending the Manhattan School of Music and touring with trumpeter Terence Blanchard. Based on audience reaction, Clayton was the crowd favorite; he mixed elements of Beethoven, John Lewis and stride with an engaging, overtly strong sense of swing. Parks displayed a beautiful touch and offered introspective, thoughtful solos. But it was the final competitor Hamasyan who most impressed the judges, including Herbie Hancock, Andrew Hill, Danilo Perez, Renee Rosnes, Billy Taylor and Randy Weston. At the conclusion of his performance, the competition’s rhythm section, bassist Rodney Whitaker and drummer Carl Allen, both gave Hamasyan nods of appreciation.

As befitting the 20th anniversary of this competition, the Thelonious Monk Institute of Jazz pulled out some big stops. Former Secretaries of State Madeleine Albright and Colin Powell, both professing their love of jazz, presented Stevie Wonder with the Maria Fisher Founders Award for his support of the Institute and jazz education. As Powell referred to him, “the Eighth, Ninth and 10th Wonder of the World” played harmonica and sang “Midnight Sun” backed by Herbie Hancock and Ron Carter.

Phylicia Rashad, Quincy Jones and Billy Dee Williams brought some Hollywood sparkle and served as warm, genial hosts, but the heartfelt, unscripted remarks from presenters Herbie Hancock, Quincy Jones, Joshua Redman and Wayne Shorter best captured the spirit of the music. Of course, being in Washington, D.C., it’s always interesting to read the tea leaves just before an election. One could not help but notice that while all of the presenters and sponsors received polite applause, Colin Powell, who was in the news this week for opposing the current administration’s rewritten definition of torture, was greeted with a roar of approval.

With so many jazz stars in attendance there were numerous inspiring moments. Gretchen Parlato, the 2004 vocal competition winner, opened the evening with a sensitive, nimble duet of “One Note Samba” featuring guitarist Lionel Loueke. Saxophonists Wayne Shorter and Joshua Redman played darting intertwined solos on an intriguing, angular arrangement of “So What” backed by John Patitucci and Terri Lyne Carrington. A slimmed-down effervescent Patti Austin paid tribute to Ella Fitzgerald by singing her famous scat chorus on “How High the Moon” note for note, but somehow still managed to sound more like Patti than Ella. And Jacky Terrasson led a trio interpreting the Hungarian composer Kalman Olah’s award-winning composition “Always.”

In an evening of musical high notes, there were two magically sublime performances. The first was a lovely, impromptu piano-soprano saxophone duet of “flavors” that Hancock and Shorter dedicated to Tom Carter of the Monk Institute. The second was a brilliant arrangement of Monk’s “Four in One” featuring Danilo Perez, Ron Carter, Terence Blanchard, Seamus Blake, James Carter, Jon Gordon, Bruce Williams, Don Sickler and T.S. Monk. Like the festival’s namesake, it was hip and sui generis.