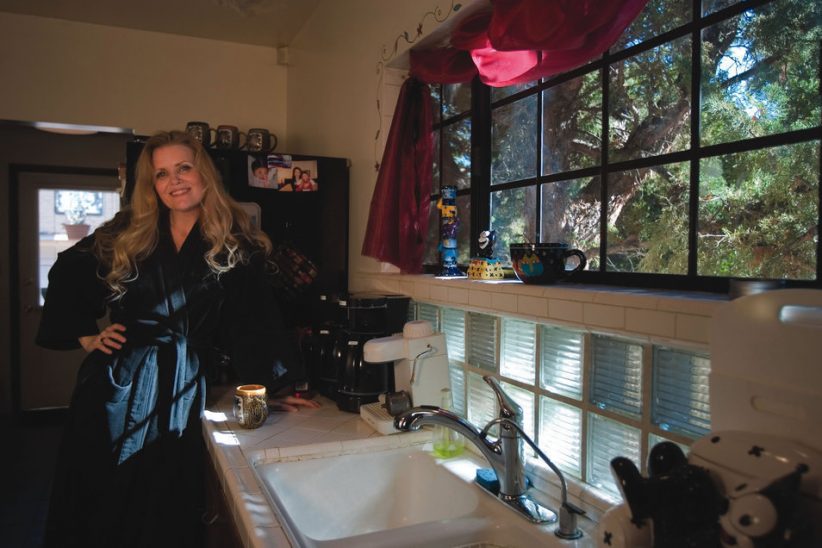 Tierney Sutton is far more lovely in person than she appears in photographs, and she’s taller, too. Standing in her cozy, shaded kitchen wearing jeans, a simple black wrap top and sandals, with her long titian hair waved around her face, she looks like a film star. As striking as she is, the versatile vocalist’s concern right now-as she leans over the tiled counter to peer at a photographer’s laptop screen-is that there will be no bad angles or awkward poses in the photos of her chosen to accompany this story. As if.

It’s not vanity, but rather an exacting sensibility that the Milwaukee-raised Sutton also brings to her recording endeavors, including her exquisite new CD, On the Other Side. Her sixth album for Telarc was recorded once again with her stellar quartet of pianist Christian Jacob, bassists Kevin Axt and Trey Henry, and drummer Ray Brinker, the musicians she has collaborated with for 14 years.

As with previous albums, Tierney focuses with laser precision on a unique theme: On the Other Side explores the dark underbelly of the state of happiness. On the collection she turns many well-known, sunny chestnuts on their ears by slowing the tempo or rearranging the rhythmic elements, the better to mine the pathos lying just under the lyric. Sutton’s voice is clear and measured in tone, fluid and precise in her execution of gems such as “Happy Talk,” “Get Happy,” “Make Someone Happy” and “Smile”-pieces that become elegiac, heart-wrenching in her haunting readings. “It’s about the illusory and often disillusioning quality of the idea of happiness,” Sutton explains.

Home for Sutton is a pretty California ranch house tucked in a corner of Van Nuys, a Los Angeles suburb. After relocating to Southern California from Boston in the early ’90s, she moved into the home with her husband 11 years ago. Inside, Tierney has free-painted flowering vines around the archway from the dining room to the kitchen and around the window over the kitchen sink. “My mom was a visual artist and there’s a lot in my background that’s like that,” Sutton explains of her artistic bent. “I think there’s such an overlap with people that do one kind of art that they’re very often drawn to another kind of art.”

The three-bedroom home includes office space for herself and her husband, a busy trombonist, and a room for their 10-year-old son Ryan, a sports enthusiast. The house includes a den, a unique master-bedroom suite with an open bathroom and office loft, as well as a guesthouse and yard in back. There’s an air of relaxed comfort in the house, with Craftsman- and Mission-style furnishings mixed with touches of Asian art and textiles. Sutton and her family, who practice the Báha’í faith, open their home to seven other families with children for multi-faith Sunday school study of other religions, a primary practice within Báha’í.

While New York is frequently seen as the hub of jazz scholarship and recording activity, Sutton speaks passionately about the numerous work opportunities for Los Angeles musicians. “The craftsmanship is so high because they’re getting something new every day and they’re fitting into all these different circumstances every day,” she says of musicians who play Hollywood scoring or event sessions. “That to me is a great skill-set for a jazz musician, because to me, being a jazz musician is interacting with all these different kinds of people.”

She excitedly shares the fact that just prior to the interview, she was called on by Oscar-winning songwriters Alan and Marilyn Bergman to help demo a medley of Academy Award-winning songs for possible inclusion in the 2007 Academy Awards. “It’s a really interesting town because even though it’s not a ‘jazz’ town in a lot of people’s minds, there are so many legendary composers and musicians that live in this town,” she explains.

Working with the Oscar- and Grammy-winning Bergmans, who are still extremely active in the pursuit of their art, was motivating to Sutton as a jazz artist. “I know that the people that I deal with-the club owners, the promoters, the musicians-they’re in it for a fairly pure motive,” she says. “So it gives you this gift of being able to be around people that have a different set of standards than most people in fields where they’re going to become rich and famous. No one gets in this to become rich and famous, and that’s a wonderful thing.”

Favorite Place in the House

The bed. “If you ask my husband, he’ll say that I’m there about three quarters of the time. I am a big sleeper. Some people live those lives where they get three hours of sleep a night, but that is not me. I’m an eight-hour-plus girl, and I will frequently get up, get my son off to school, and go back to bed for a couple of hours. When I’m on the road, I’ll sleep nine or 10 hours because that’s the only way I can keep my voice in shape.”

Currently reading The Year of Magical Thinking by Joan Didion. “I go between reading novels, reading things that people have recommended and reading spiritual books.”

“I drive a Toyota RAV4, I think it’s from like 2003 or ’04. I wanted a car that was high enough so I could see over the incessant SUVs that are on the freeway but I didn’t want to pollute the environment, so I got one with a compact car engine so I get really good gas mileage. I keep it pretty simple, but I do have XM Satellite Radio in it. For Christmas my husband got me a navigation thing, which I am digging. I don’t know what he paid for it, but it’s a beautiful thing.”

“I have a treadmill in my house and I exercise most of the days that I’m home. I usually spend 40 minutes on the treadmill and 20 minutes on weights and sit-ups and that kind of stuff; it’s pretty typical. That’s a big part of my life. There’s also my office, which I really love that my husband added on to the house.”

“I’m a problem shopper for gig clothes, because I’m always looking for something that’s going to make me feel appropriately empowered on stage. And not being 26, I want it to be attractive and not inappropriate, so it’s a real tough one. I find myself usually only shopping or spending a reasonable amount of money on stuff for gigs, the rest of the time I just keep what I have…. I used to make these jokes onstage that I do have very good-looking feet, so I do have a lot of shoes. I’m a shoe girl.”