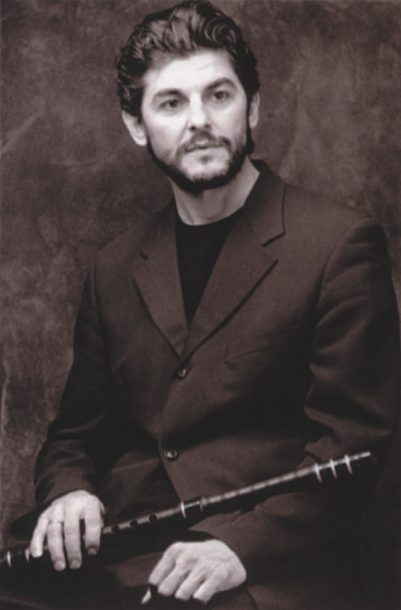 The world, so goes the cliché, is getting smaller, but the cultural possibilities are getting larger. So hearing Theodosii Spassov’s merger of traditional Bulgarian music and jazz may be disarming, but hardly shocking. It’s a sign and sound of the times.

Spassov has been working on the accord between the music of his heritage for several years, and his argument is mighty persuasive on his new project for the Traditional Crossroads label, The Fish Are Praying for Rain, his first U.S. release. On it, Spassov demonstrates his virtuosity on the Bulgarian end-blown wooden flute known as the kaval, in a setting alongside piano and drums. On the material, intricate metric designs of Eastern Europe meet swung phrasing, with no apology needed.

He lives in Sofia, Bulgaria, but the road is often his home, with such gigs as tours with the Riverdance phenomenon. Although he followed a conventional study course in Bulgaria, Spassov says it was “my dream to play with other musicians, from jazz, from folk and classical. This instrument was especially for traditional music. I was born in 1961, and my generation is different than earlier generations. It was my dream and I tried to develop my instrument to be more universal.”

Spassov has found a ripe environment for his pan-stylistic ideas, at a time when young musicians, especially in the New York area, have taken a new interest in Eastern European musical vocabularies.

Another recent jazz-world project found him playing alongside Greek saxophonist Dmitri Vasalakis, saxist Dave Liebman and percussionist Jamey Haddad. From his perspective, the music scene is showing encouraging expansion of its attitude, in which “world music and ethnic influences can be heard more. Many musicians are trying to mix different cultures with music. I think this will be the new way in this century. We need to live together now.”