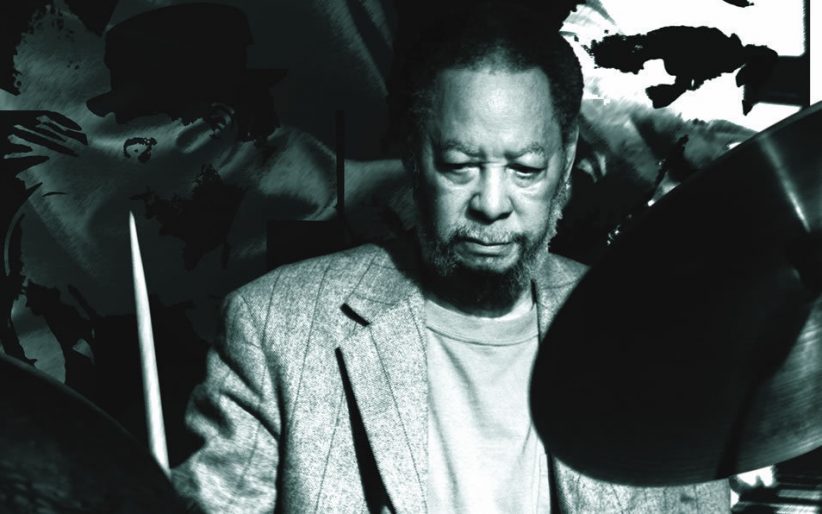 In his introductory remarks, promoter Jack Kleinsinger admitted that he was a little early for Monk’s October 90th birthday but wanted to be the first to put on such a concert. He went on to say that the inspiration for the event had come from Memories of T, the excellent 2006 CD by Ben Riley and His Monk Legacy Septet.

The band seemed a little stiff to begin with, giving the impression of reading arrangements more than really feeling the material. They played tunes from Memories of T, such as “Brake’s Sake,” “Bemsha Swing,” and wound up with the wonderful, loping arrangement of “Epistrophy.”

This is-as is often noted-a pianoless group, but the clever arrangements often include transcriptions of Monk’s playing from specific recordings, with parts divided among the horns so that each horn represents one of Monk’s fingers. Bryant’s angular guitar also filled Monk’s role at times. Underneath it all Riley’s peppery, minimalist drumming and Kitagawa’s strong walking bass provided the forward momentum.

Escoffery and Williams both had a couple of chances to solo and seemed to warm up as the set went on, Williams playing in an exciting style with bluesy notes and phrases punctuated by fast runs, Escoffery offering a more laid-back, flowing sound that balanced the sharp-edged arrangements and compositions. Don Sickler’s trumpet-warm and centered-also added an effective lyricism.

But the highlights of the set were the interactions between drum and bass, when the arrangements emptied out and Riley revealed just how little it takes to really swing, at one point accompanying Kitagawa as he soloed with the right hand playing triplets on the almost-closed hi-hats, while the left hand muffled the hi-hat cymbals and added chiming accents by tapping the stand with the drumstick.

Unrecorded arrangements of “Bye-Ya” and “Bright Mississippi” were a pleasant surprise and give reason to hope that there will soon be another album from this wonderful band.

Next, actor Rome Neal performed selections from Laurence Holder’s play, Monk. Dressed in vintage clothing, wearing a red and black, somewhat ecclesiastical hat, he affected Monk’s heavy-lidded demeanor and recited a monologue accompanied by pianist John Di Martino playing “Crepuscule for Nellie” in the background. It might have been effective in a small theater, but in the context of a jazz concert it seemed out of place. One could only wonder what those in the wings and the audience who had actually known Monk were thinking.

More welcome was poet Amiri Baraka, who emerged to give a brief but charming reading-at times interspersed with singing-of several selections, including “Well, You Needn’t,” “Criss Cross” and “Thelonious” from his collection, Monk Poems.

After intermission there was another short selection by Rome Neal, then Kleinsinger introduced the headliner, pianist Kenny Barron (pictured), saying, “perhaps more than anyone this is the great Monk disciple.” As if in response to that introduction, Barron seemed to head in the opposite direction, playing Monk’s tune “Well, You Needn’t” in a style-full of dense runs and clusters of notes-that seemed to turn Monk’s spare angularity upside down. He played very fast in an almost anti-romantic style with the accents coming from regular staccato bass chords and not a hint of Monk’s spiky, unexpected right-hand jabs.

Next he played “Serenade in Blue,” best known as a syrupy Glenn Miller hit, again very fast and in almost a stride style, with the left hand playing a walking bass line and the right hand dancing through a series of melodic improvisations that did at times recall Monk. He quite thrillingly played against the sentiment of the song in a way that sounded both postmodern and “modernistic,” like tongue-in-cheek, 2/4-time ragtime.

He continued with a medley of three tunes, each seeming to slow down a little more, and to breathe a little more, heading the concert toward a final note of calm and reflection. Unfortunately, the mood was dispelled with one last appearance of Rome Neal, who took hold of the microphone like the tiresome drunk at a party that everyone thought had already left. He seemed to be improvising a saccharine impression of Monk arriving in Heaven and seeing all his old jazz pals just before digging into a celestial jam session. Yuck.