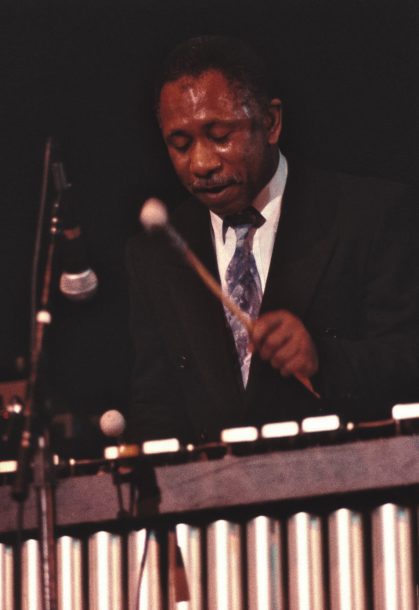 Like a time capsule dropped smack-dab in the center of left field, this reissue could just as easily be some prehistoric artifact as an object from a futuristic space age. Even in the realm of avant-garde music, where anything and everything is possible, this recording reveals a completely fresh approach to free improvisation in the jazz idiom, undoubtedly influenced by the innovations of ’60s psychedelic rock and dub trickery. Recorded live on Oct. 6 or 7, 1972 at a basement coffeehouse near the University of Pennsylvania and originally released on long-forgotten and defunct Philadelphia label Dogtown Records, Drum Dance to the Motherland was underrated vibraphonist-percussionist Khan Jamal’s album debut as a leader-he appeared, alongside Byard Lancaster, on Sounds of Liberation’s self-titled 1972 album-released a few years before a larger audience noticed him playing with Sun Ra, Charles Tyler, Billy Bang and Ronald Shannon Jackson.

His strangely concocted Creative Arts Ensemble (Jamal on vibes, marimba and clarinet; Alex Ellison on drums and percussion; Dwight James on drums, glockenspiel and clarinet; Billy Mills on electric and acoustic bass; Monnette Sudler on electric guitar and percussion) was comprised mostly of childhood friends, who clearly developed an innate empathy evident in the opening improvisation “Cosmic Tones.” The listener is immediately thrust into a foreign soundscape as James’ artificially manipulated drums-not unlike the dub innovations of Lee “Scratch” Perry-lead into a sprinkling of glockenspiel and alien effects and then into “Drum Dance,” as the whole ensemble dives into a ritualistic, tribal frenzy. Jamal moves from braying clarinet to swinging marimba with facility, as the hypnotic, rhythmic underpinning evokes a firm African heritage. “Inner Peace” is marked by the emergence of Sudler’s spacy soloing, drenched in reverb and delay, calmly sailing over a bed of random percussion as Mills lays down a simple bass groove.

Overall, the whole performance sounds akin to Sun Ra’s farthest-reaching, hallucinatory journeys such as Atlantis and Strange Strings, but informed as well by dub and experimental rock. Very rarely has an album straddled the line between primal and technological with such grace and sensibility.