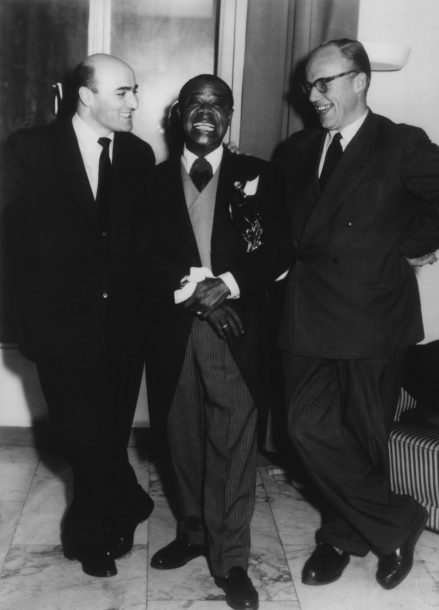 George Avakian accepts his NEA Jazz Master award in New York in 2010; poet A. B. Spellman can be seen at back (photo by Alan Nahigian)

“Ask any jazz expert to name the music’s greatest all-time figures and pretty quickly you’ll hear the name Louis Armstrong. Ask your expert to name his finest recordings and you’ll surely hear such titles as ‘West End Blues’ and ‘Potato Head Blues.’ You’ll hear this because Armstrong and those records are part of the jazz canon.

But where do such canons come from? Who said that Armstrong and ‘Potato Head Blues’ were so great in the first place? The answer is, George Avakian said so…. When Woody Allen told us in his movie Manhattan that ‘Potato Head Blues’ was one of the things that made life worthwhile, maybe it was because Mr. Avakian enabled him to hear it at an impressionable age.”