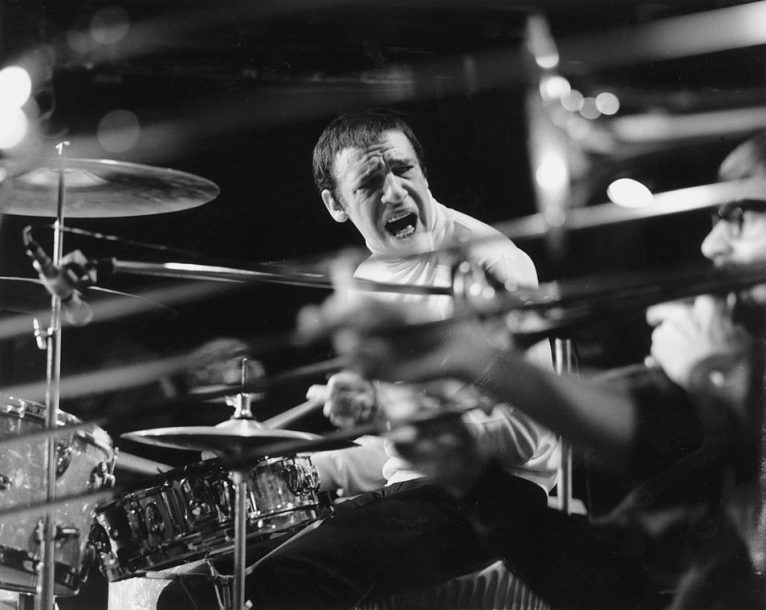 The voice is concussively powerful, an imposing white-hot blast of verbiage to rival that of Ralph Kramden from The Honeymooners, drill sergeant Vince Carter of Gomer Pyle fame or any other celebrated loudmouths from the TV, film and sports worlds. And yet, the staccato attack, sheer intensity and hip musician lingo instantly reveal the identity of the man behind this particularly vituperative assault.

It is unmistakably Buddy.

No one else in jazz history could rant quite like the enraged Mr. Rich. Whether it was during long hauls on the bus between gigs in Peoria and Poughkeepsie or whether he was just berating band members backstage after an uninspired performance, Buddy would invariably launch into stream of consciousness putdowns that elevated invective to performance art.

I’m up there workin’ my balls off tryin’ to do somebody a favor and you motherfuckers are suckin’ all over this joint. What kind of trumpet section do you call this tonight? And saxophones! You gotta fuckin’ be kiddin’ me!

Buddy’s tempestuous asides and berating speeches to his beleaguered band members have become part of jazz lore. Taped copies have circulated the globe several times over in the past 20 years. Today those same tapes represent a new slant on six degrees of separation. Generations of conservatory students and working jazz musicians alike, critics, radio programmers, publicists, engineers, stage hands and industry executives are by now well acquainted with “The Buddy Tapes.” Some have committed to memory such stinging Buddyisms as “You’ve got two weeks to clean up your fuckin’ act if you want this job” or the classic “Do you want a beard or do you want a job?” One wag even went so far as to transcribe and illustrate an entire comic book based on “The Buddy Tapes.” In his Buddy Rich biography, Traps: The Drum Wonder, singer Mel Tormé added to the enduring legacy of “The Buddy Tapes” by offering a transcription (with expletives deleted) of one particularly caustic rant in a chapter he titled “Buddy’s Mouth.”

In spite of their rather harsh tone, the fabled Buddy rants do convey the sense of a leader trying to inspire his troops, à la Vince Lombardi trying to motivate his Green Bay Packers to come back from a halftime deficit. In one of the less-quoted tapes, Buddy is heard laying down the law about the meaning of musicality and the idea of achieving a band sound. “You play as one,” he roars. “It’s a concept that I want in my band.” An admirable conceit, to be sure. But moments later he is heard pushing the envelope on abuse.

Pianist Lee Musiker says it was in a spirit of awe and reverence for Rich’s wisdom, professionalism and steely command that he originally recorded (surreptitiously with an Aiwa tape recorder stuffed inside a folded up newspaper on his lap) the iconic “Buddy Tapes” between January of 1983 and January of 1985.

“These tapes were made because I knew that they were historic,” says Musiker. “Through it all the message was excellence and perfection and bringing your best talent to the bandstand. Buddy always played at 200%. He just pushed it to the max and that’s exactly what he demanded from everybody. He demanded excellence and perfection and wanted the very best that you could give, so the message was purely professional and musical. And evidently Buddy got some of his discipline from the Tommy Dorsey band. I don’t know if Tommy screamed at his guys but Buddy was carrying on a tradition of musical nobility.” The big band world’s equivalent of tough love.

On stage, Buddy was indeed an exacting taskmaster. He always demanded three things from his underlings-attention, respect and 100% conviction. And if he didn’t get it there was invariably hell to pay.

I gotta go up there and be embarrassed by you motherfuckers? I played with the greatest fuckin’ musicians in the world. How DARE you play like that for me.

Musiker says he never intended for his tapes to circulate so widely. The whole thing, he explains, began rather innocently. “A musician that was on Buddy’s band at the time [trombonist Mike Davis] had asked me for a copy when he went to play in Maynard Ferguson’s band. That’s how it first got out. I gave a copy, reluctantly, to him and then evidently this stuff started spreading to the guys in Maynard’s band and on to Woody Herman’s band, which were the other two major road bands at the time. And then they started just circulating and spreading like wildfire. By the time I got off Buddy’s band I started hearing reports about this stuff all over the place.”

Musiker carried the tape recorder to all of Rich’s gigs, strictly with the intention of documenting certain aspects of the show. “I always had the recorder ready with fresh tape because when Buddy would give me a solo tune or he would ask the trio to do a number, I would just flip the recorder on in the piano, tucked inside of the Steinway. I would record the solo or the trio tunes on the gig to later examine and improve on my own playing. So if what I played at night was not up to my liking I would listen to it, I would hear why it was not up to my standards and then I would go over it. Anything that was good and had a spark of fire, that’s what I would keep. So I always had fresh tape ready to go throughout the tours. And then of course when we would be on the bus or in the dressing room and I could feel one of Buddy’s speeches was coming on, I’d get the recorder ready to get that information.

“And again, to me the impact of his speeches was purely professional, even though it was interpreted as funny by other people. But from my end it was a reverential thing. I thought this was historical and I understood that it was educational. The intent of his screaming was really to shape the band, to demand everybody’s best and it was coming from a position of strength. He wanted people to play with the same intensity and honesty that he was playing. And if he didn’t see that it was honest and with your best effort, then he would get very angry. So for me he was like a musical father, a teacher, a principal, religious leader-all those things.”

What kind of playing is being played here the past two nights?! What is this? New phrasing, new bending, new sounds, no time. What the fuck do you think I’m runnin’ here? Sit down and play some fuckin’ music!

In one particularly vicious rant from “The Buddy Tapes,” the enraged bandleader focuses his wrath with laser-like intensity on an unsuspecting trombone player from Australia by the name of Dave Panichi, who had been blissfully stoned and fast asleep while Buddy was in mid-rant. The point of contention for Rich was Panichi’s beard, which the defiant young Aussie had steadfastly refused to shave off. As Buddy explains to him, “You got two fuckin’ weeks to make up your mind. Do ya want a beard or do ya want a job? I will not have this shit! This band is not the goddamn fuckin’ House of David baseball team [a reference to the turn-of-the-century New York team whose members all sported long Smith Bros.-type beards]. It’s the Buddy Rich Band-young people with faces. No more fuckin’ beards. It’s out! If you decide to do it, you’re through. Right now! This is the last time I make this announcement. No more fucking beards. I don’t wanna see it. If ya got it, you’re gonna shave it off. I’ll treat ya just like they treat ya in the Marine Corps. This is the way I want my band to look. If ya don’t like it, get out!”

The verbal assault escalates to a near physical confrontation with the trombonist before Buddy finally serves him with his walking papers: “I’m tired of puttin’ up with you, I’m tired of signin’ for ya [a reference to assisting Panichi in the immigration process], I’m tired of you period!” And finally, “Listen, go back to Sydney and, er…whatever you do over there, good luck. Not over here. You’re through.” And then an aside, “I want him off the fuckin’ band. Right now!”

Not only did Panichi not get fired, he remained in Buddy’s band for another year. “The funny thing was he actually respected me for sticking up for myself,” says the trombonist. “I mean, that night he was winking at me on the bandstand and shit. He actually liked the fact that I had some spirit, that I wasn’t a pussy. And in a strange kind of way, there was some kind of bond there.”

Panichi says in retrospect, “Being Australian, you have a completely different relationship to authority figures than you do here. People here are much more sort of docile or obedient around authority figures. My own feeling was he couldn’t get away with that shit with an Australian band. Somebody would’ve popped him. As far as that shit is concerned, Buddy was like a really, really mild version of my father. My old man would never threaten to hit, he would just fuckin’ haul off and whack ya. So the thing with the threat shit is if you threaten somebody once and you don’t do it, then it’s an empty threat.

“The deal with Buddy,” he continues, “was that he was completely psychotic but predictable. And we always knew when he was going to go off. Basically, anytime he saw his wife he’d go off, anytime he ran out of reefer he’d go off, anytime that we had guests on the bus there was always a tangible display of authority for their benefit…basically him saying, ‘I’m the boss, look at me exert my authority.'”

How dare you call yourselves professional! Assholes!! You got nowhere to fuckin’ go the next set ’cause if I hear one fuckin’ clam from anybody, you’ve had it. One clam and this whole fuckin’ band is through TONIGHT. Try me!

Today Panichi refers to the account of his infamous confrontation with Buddy on the bus as “that dreaded tape.” And he has conflicting thoughts about being part of jazz lore. “It’s bizarre,” he says. “It’s definitely opened a door or two but in a way it’s kind of sad because I’m a good fuckin’ player. So I have mixed feelings about it. To me, it’s just a side issue; it has nothing to do with anything. But on another level, the reality is that I will be forever associated with the speech tapes. If I live to be 150 years old, my fuckin’ epitaph will be: Here lies Dave Panichi, the guy on the Buddy tape.”

You try one fuck-up the next set and when you get back to New York you’ll need another fuckin’ job. COUNT ON IT! Now get outta my fuckin’ bus.