Skip to content
Become a member and get exclusive access to articles, live sessions and more!
Start Your Free Trial
Home > JT Archives > The Brass Fantasies of Lester Bowie 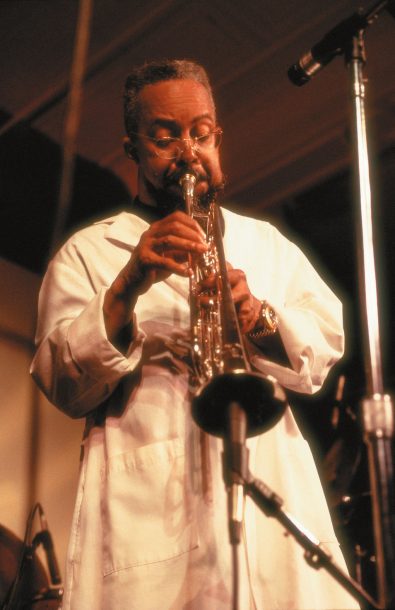 Brass Fantasy is the unruly realization of a Lester Bowie dream.

Bowie, of course, is the virtuosic trumpeter who has brought a unique blend of bite and perspective to the avant garde over the past 30 years. His probing, roots-aware playing embraces the length and breadth of the brass tradition in jazz, bringing in other musical lines from cultures around the world, and fusing them in a style that is at once aesthetically demanding and playful-“Serious Fun,” as one of his recordings suggests.

Take this singular voice, add trumpets and trombones in threes, with tuba and two percussionists to anchor the ensemble in time. Stir in challenging charts that range from doo-wop to wailing stomps, and you have Brass Fantasy:

“Brass Fantasy was an idea I had had for quite a long time,” Lester recalled recently. “I first got the idea back in the early days of the AACM, when we used to do all sorts of different types of unorthodox groups. I wasn’t able to do it until 1982, when I was invited by a classical festival in Karlsruhe, Germany to put together any kind of group I wanted to for a performance at the festival. That gave me the chance I’d been looking for…and we’ve been together ever since.”

Asked to define Brass Fantasy’s place in the musical continuum, Bowie is quick to place the band in a line that extends well beyond what we usually think of as jazz. “We are definitely the world’s greatest brass choir,” he claims, “and our literature is part of the most advanced brass choir literature in the world. We’re the continuation of the whole brass choir tradition, and an extension of the New Orleans brass band-but at the same time, we’re a different entity. We’re using different techniques in our solos and ensemble playing, different sorts of voicings and arrangements…we’re trying to show just how expressive the brass instruments can be. Up until now, trumpeters have been limited to the ‘normal notes’ of the diatonic scale. But compared to 12 ‘normal’ notes, shit, you’ve got 50 notes in between. So we’re trying to utilize all those-and not just for effect, but to show how using them in conjunction with those ‘normal notes’ makes for a completely different statement.”

The mark of a large ensemble is its book, and Brass Fantasy has a book as broad and deep as the traditions it represents. “I select and assign all the songs to my different writers-I have a staff of writers. And when I feel a song-when I hear something on the radio that I like or it’s just a song I like, I give it to one of the writers and ask them to give me an arrangement on it.

“What happens is, each tour, I try to add two or three new tunes. For example, this last tour I commissioned two new pieces: ‘Don’t Cry for Me Argentina’ and ‘One Love’ by Bob Marley. We’ve now got about 75 tunes in the book. But we’ve got other stuff coming. We’re getting ready to do a great tune by Marilyn Manson.” Bowie clearly relishes his role as a musical contrarian, admitting influences to his music that many jazz fans would eschew, if they knew of them at all.

Amid such diverse music, Bowie yet manages to maintain consistency in the band’s book, both in terms of quality and approach. “First of all, I don’t accept tunes from anyone but brass players,” he notes. “Only brass players, because we really understand the instruments…most of your arrangers are piano players or saxophone players. But it so happens that some of your better arrangers are trombonists, like Steve Turre, J.J. Johnson or Melba Liston. They have a really good idea of what brass-not so much what they can or cannot do, but how they sound best, or which way are they shown in their best light.”

His own musicianship and creative presence remain very much the centerpiece of the band. At a recent performance of Brass Fantasy, Bowie worked the front of the stage through three microphones: one at knee-level that seemed to soften the sound of the horn, and two more chest-high that fed into different places in the stereo mix. As if conducting himself through his solos, he would rip his trumpet from left to right, pulling back from the microphones as his phrases peaked, cosseting in as he dropped into barely audible extensions of his line. “I’ve always done that,” Lester explains, “That’s why I have trouble with sound guys. I always tell ’em, ‘Give me a setting and just leave it alone.’ Don’t try to adjust, because the problem they always have with me is that my style goes from loud to soft to everything in between, and it can do it in an instant. What I’d tell these guys is, ‘Don’t worry, when I play loud I back away from the microphone. But there’s also things I might play in the next instant that will be whisper soft. So you have to allow me to work the microphones; don’t try to work it for me, ’cause you don’t know what I’m going to play’-and that way I can really deal with the sound. Otherwise, they’re going to get caught…if they can’t pick up the strength, and they can’t pick up the subtlety, then they’re missing 90% of what I do.”

“The gear thing I don’t do. I don’t make any instrumental endorsements, because I’ve never been even offered an endorsement, even a mouthpiece or a bottle of valve oil, by any instrument maker-I believe that no one wants to take responsibility for my sound. So I don’t give any information like that out for publication; if someone wants to ask me, I’ll be happy to discuss it face-to-face.”

“I listen to all kinds of music-I listen to everything except myself: not too much Brass Fantasy, and not too much Art Ensemble. The latest things I’ve been listening to are Biggie Smalls and Marilyn Manson, because I’m working on some arrangements on them. There’s this one tune Biggie does called “Player Haters” [on L’il Kim’s CD Hard Core (Big Beat/Atlantic)]. And the Manson thing is called “Beautiful People” [on the CD Antichrist Superstar (Nothing/ Interscope)]…I’ve also been listening to a set of Miles Davis that someone taped in a club in Saint Louis in 1956; I’m a great Miles Davis fan; anything Miles does, I’m always interested in that. The recording itself is not so good, but to hear those guys in 1956 is really great; it’s Philly Joe Jones, ‘Trane, Red Garland…Miles is my all-time favorite…”