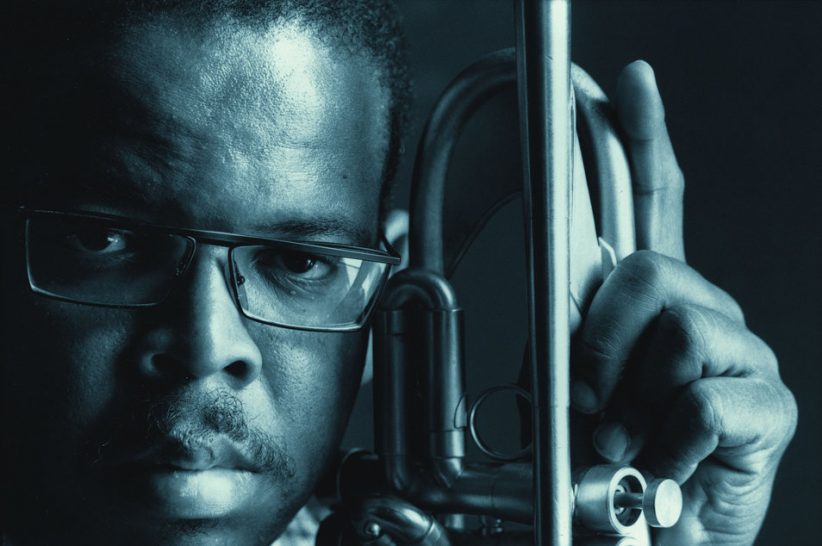 For the past dozen years, ever since hooking up with filmmaker Spike Lee on School Daze (1987), trumpeter Terence Blanchard has amassed an impressive body of work as a soundtrack composer. Some of his milestones along the way in that milieu have included original, highly evocative scores for Lee’s Jungle Fever (1991), Malcolm X (1992), Clockers (1995) and the Academy Award-nominated documentary Four Little Girls (1997) along with the score for Eve’s Bayou and the HBO film Gia . And yet, the New Orleans native considers himself a relative rookie in the field of film scoring.

“I feel very fortunate to have the film career that I’ve had and meet the people that I’ve met,” he says. “But it’s kind of strange because I still think of myself as a beginner in this thing. I’m not Jerry Goldsmith or Elmer Bernstein or John Williams or any of those guys. I’m the new guy on the block, so I’m still trying to figure it all out.”

Meanwhile, Blanchard has put together his own personal tribute to movie music in Jazz on Film. His debut for Sony Classical is a collection of new arrangements on influential themes from such classic American movies as A Streetcar Named Desire (Alex North), Anatomy of a Murder (Duke Ellington), Taxi Driver (Bernard Herrman), The Pawnbroker (Quincy Jones), and The Man With the Golden Arm (Elmer Bernstein). The project also represents a reunion of the Blanchard/Harrison band, which emerged as part of the young lions movement in the early ’80s and earned much critical acclaim before disbanding by the end of the decade. Considering that 10 years have passed since Blanchard and his alto saxophonist partner Donald Harrison went their separate ways, the 37-year-old trumpeter was naturally curious to see how time had affected their chemistry.

“Playing with Donald is like riding a bike,” he discovered. “There are certain things that he’ll do and you’ll go, ‘OK, yeah, right. I remember that.’ And it was the same way with (drummer) Carl (Allen) and (bassist) Reginald (Veal) too. They made two records with us back then -Black Pearls and Crystal Stair-and they added a great deal to this project as well. And it was interesting for me because making this record I was looking at these guys and it started to dawn on me that we weren’t the 19- and 20-year- olds anymore. There’s been a lot of growth and maturity in all of these players, and that was a very inspiring thing for me to see. Watching these guys respond to each other, it’s almost as if you’re watching guys on a basketball team. It’s like, ‘OK, we haven’t played together in a while so get ready for this pass I’m about to throw to you. Be prepared.’ So it was just amazing watching these guys do what they do and bring what they brought to the project.”

Sadly, Jazz on Film also documents one of the last recordings by Kenny Kirkland, whose playing is superb throughout. Blanchard and Kirkland share some especially poignant moments together on the hauntingly beautiful theme from Jerry Goldsmith’s Chinatown, which features a stirring intro from the late pianist.

“It was very painful to get the news about Kenny,” says Blanchard of his fallen comrade. “As talented as Kenny was, I always felt like there was just much more that we were going to hear from this guy. It’s not too often that you see guys who have the kind of talent that he has and are as open and warm as he was. And funny too. I mean, it was hard for me to believe what happened. I didn’t get a chance to go to the funeral so it’s even hard for me to think about Kenny not even being around. It still hasn’t registered yet.”

The core lineup of Blanchard on trumpet, Kirkland on piano, Harrison on alto sax, Allen on drums and Veal on bass is augmented throughout Jazz on Film by a full orchestra conducted by either Steven Mercurio or J.A.C. Redford. Special guests Joe Henderson and Steve Turre further enhance the lush proceedings with brilliant solo contributions on a few tracks. Henderson’s playing is particularly inspired on Bernard Herrman’s theme from Taxi Driver and on Blanchard’s own dark-hued theme from Clockers.

“Having Joe Henderson on the record was like a crowning achievement for me,” says Blanchard. “That was something that I never thought would ever happen. And to have him there, having a good time, being very productive and being into the project meant a lot to me. I was so in awe of Joe just watching his every move during the session, trying to figure out how he was going to approach every tune.

“I remember us taking a lunch break and I walked out of the studio and I realized that he was still inside. So I walked back in to see if he needed something to eat and there he was at the piano going over the changes to all of the tunes. I had another experience like that with Herbie Hancock on a pop session with Don Was. The song was only three chords but Herbie came in, sat down and he worked out some stuff to play. He didn’t take it lightly. And I looked at Joe and thought, ‘Wow, he’s doing the same thing Herbie did.’ You think these guys reach a certain level where they can come in and just do what they do. But part of what they do is to have respect for the music and not treat it lightly. That was a big lesson for me.”

Blanchard also noted Henderson’s purely intuitive approach to tunes and his prideful refusal to ever play the same thing twice. “It was interesting to listen to Joe on different takes,” he says. “Just as I thought that I would have a clue as to how he would approach the changes of a certain tune, he would come up with another idea and his solo would take on a whole other feel. That’s pretty amazing to witness. I mean, you’ve heard him do it on records but to actually stand next to the guy and watch him in the middle of his process was a great learning experience. That’s the great thing about playing with any of those guys, whether it’s Joe or Herbie or Sonny Rollins. Those guys have reached a level of maturity and mastery, it’s almost as if they can play whatever they feel like playing.”

Henderson also shines on the album’s rarest gem, a bit of Ellingtonia entitled “Degas’ Racing World,” which was originally written as part of a soundtrack for a documentary about the painter Edgar Degas’ images of the French equestrian track. While the film was never completed, “The Degas Suite” was later salvaged for Volume 5 of Ellington’s The Private Collection series issued in 1968 by Atlantic. “When I first heard it-and this is well before thinking about this project-I said to myself, ‘There has to be a way to record this thing because I just love the melody.’ And when this project came along, I brought out that piece. And even though the film was never released and it was a documentary to begin with, it still fits the concept here.”

Switching back and forth between writing music for his band and composing scores for movies seems to suit the multi-directional composer. And even though each discipline involves flexing a different set of muscles, so to speak, he points out that there are some similarities in the process.

“The intent of the musics is totally different,” he explains. “The intent behind jazz is to just say whatever it is that’s on your mind and deal with the story that you’re trying to tell. In film, the music still tells a story but it plays a secondary role. You’re supporting character. It’s almost like you’re comping the whole night and never taking a solo. So it’s vastly different in that regard. There are some similarities in that you do have to take a theme and develop an idea musically. It’s just that in film you have a little bit more time to develop the idea and think about what it is you wanna do. In jazz, you don’t have as much time to think, you just have to react.”

On the filmic side of things, Blanchard recently put the finishing touches on Lee’s latest blockbuster, Son of Sam, about the pyschopathic serial killer David Berkowitz and his reign of terror over New York City during the long, hot summer of 1978. “I think Spike has outdone himself with this one,” he confides. “There’s a lot of haunting stuff in this film and the thing that I’m trying to create is just a general tone and feel for the movie. I’m taking a little different approach than I’ve used in the past with some of Spike’s films. Working on Son of Sam, it dawned on me how with some films I can just breeze through and write the score rather quickly. But this one took me a little longer to write, not because it’s harder but because there’s more interesting detail in the scenes. There’s other things that happen with the characters and the way that Spike intercuts different scenes makes it all very complex and interesting. And that naturally affects my take on the music.”

Blanchard plans to perform the music from Jazz on Film with orchestras in select cities this year. He is also currently writing music for his new working band, which includes Mark Shim on tenor sax, Ed Simon on piano, David Poulfus on bass, Eric Harland on drums, and Donald Harrison alternating with 19-year-old New Orleans newcomer Aaron Fletcher on alto sax.

“I’ve been going back and listening to some of the old Miles Davis stuff that I had gotten away from for years.”I pulled up Nefertiti and Sorcerer and stuff like that. I had gotten away from that because we were labeled such Miles disciples that I wanted to distance myself from that music for a time. But I picked that stuff up again just some great records. So I’ve mainly been into that and just practicing.”