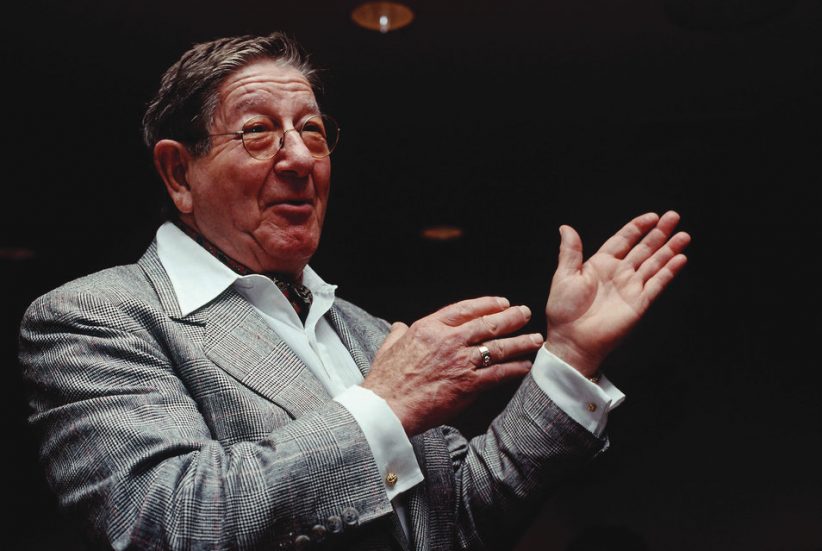 Teo Macero was truly one of a kind. In my opinion, he was the prototype musician-producer-composer-arranger bon vivant. Who else wears an ascot in our current music scene? He was a big kid, always experimenting, always looking for new and exciting developments in production. And he always paid you at the end of the day, writing you a check by hand from his briefcase that he always carried. Old school. He liked to have business meetings at Ben Benson’s Steakhouse in midtown Manhattan. I should be dead of a heart attack from the amount of prime steak we consumed at that bistro.

He encouraged me to intellectually intimidate music executives. He said the producer’s sworn enemy is the accountant. He was of the mindset that if you figured it out by yourself you would not ask the question, so I would constantly call him up and say, “Aha! You did such and such to get so-and-so,” and he would laugh. That laugh, depending on the pitch, meant either “You got it!” or “You idiot!” Once he trusted you, all kinds of tidbits of production techniques would emerge. He impressed upon me the idea of having as meaningful a professional relationship with a recording engineer as you would with an artist.

His diversity of productions is stunning. Columbia Records staff producers were assigned artists, so he would be working with Miles Davis one day, Mantovani another, Hugo Montenegro the next day, Tony Bennett on Friday and a weekend session with George Young, the Nutty Squirrels on Monday, Andre Kostelanetz Monday night, Leonard Bernstein on Tuesday at Carnegie Hall and so on. What gave him the edge was the fact that he was an accomplished musician, with a master’s degree from Juilliard in music composition, having studied with many masters of the arts in their prime.

I learned from assessing the vast catalog of sessions Miles and Teo collaborated on that this was a musical partnership that went beyond the standard concept of a producer/artist relationship. That is why you never heard music directly discussed in words during the sessions. They didn’t need to explain in words. Sometimes there was stress, but this was mostly due to the rushed nature of assembly-line production common to Columbia Records until the ’70s. One has to take into account that Bitches Brew was recorded in three three-hour union sessions starting at 10 a.m. Miles and Teo invented the concept of recording now and creating the final result later. Teo should have had an endorsement from Gillette razors for the amount of editing he did for Miles’ recordings. And it was apparent that they did fight like brothers, but always for good reasons.

As David Liebman, one of Teo’s longtime friends and collaborators, said, “To put it bluntly, in my opinion, if it wasn’t for Teo’s post-production work, we would not have the same opinion concerning the recorded work of Miles Davis during Teo’s years as producer. His contribution was monumental and overlooked. Teo was also a consummate arranger and composer on his own with a very free spirit, almost childlike in his enthusiasm and energy.”

Teo was never one to disparage a fellow producer, for he understood the difference between an amateur producer and a peer, and since he would laugh at anything you played him, you had to analyze that laugh to get his reading. A case in point: A major label released a CD on which the artist and producer claimed that they used “the Teo Macero technique” of composing via editing, aka post-production jazz. Feeling a bit sadistic, I had the label send Teo the CD. I then called Teo and told him about the project and the hype. He laughed, and by then I could read the laugh. I said that a “bomb” was in the mail, and a few days later he called and said, “I got the bomb,” and laughed. But it was a good laugh. He was honored that he was getting credit for something on a musical level, and as I explained, “Teo, you have created a style: post-composition.” He laughed again.

I did get to speak with him shortly before he passed away. I called to tell him about my Miles From India project and that I was really taking post-composition to a new level. He was curious about how much easier the process was today than in his day, and how that affected the music. I said, “For some, it’s the future; for others, it’s a crutch.” He laughed. And then he launched into his usual diatribe against the current regime at Sony, whom he always felt treated him like a character and not a human. He would never forgive them for this. I saw firsthand the humiliation he endured in his dealings with them, as they would pit him against me. In the end, Teo and I became friends, sometime confidants and peers. One of the highlights of my musical career was a night with my big band at Birdland in NYC. In the front row were Teo Macero and George Avakian, Miles’ producers. The night was a birthday party for Miles with Wallace Roney and Liebman as guests. Teo was beaming.

When I asked him if he liked the band, he laughed. A good laugh.