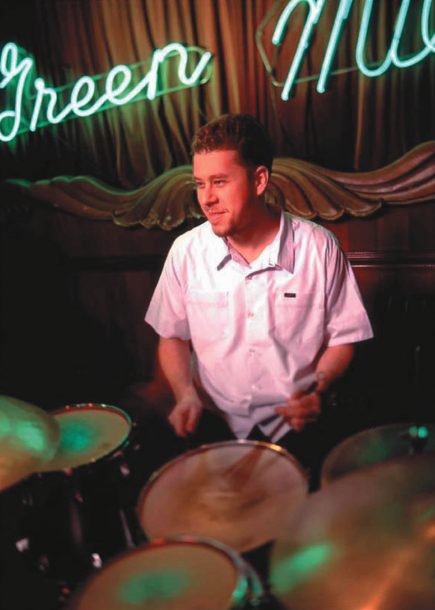 Drummer Ted Sirota traffics in musical diversity. On the superb Vs. the Forces of Evil (Naim), the third album by the Chicagoan’s group Rebel Souls, he tackles a dazzling variety of material, from the reggae-fueled “Tubby” to the Ornette Coleman-tinged “Dig to China” to a bold arrangement of the traditional Indonesian piece “Impengu Dek Bengikai” to the Herbie Hancock-flavored “Becky’s Bash.”

The Rebel Souls perform infrequently, so Sirota helps pay the bills by gigging, but his steady Saturday night shift at Chicago’s famous Green Mill club is more than just a job: Sabertooth is one of the city’s strongest, most multifaceted organ combos, and Sirota’s sticks are behind its funky grooves. If that’s not enough, Sirota has also been laying down the beats for one of the city’s most original up-and-coming hip-hop MCs, Diverse.

With all of that varied activity one would think that Sirota’s flexibility would be his calling card, but within Chicago’s multipronged cutting-edge music scene, most of the time he’s “that jazz guy.” That’s because Sirota tends to be eclipsed by some of his bandmates, players who’ve built dynamic careers by eroding stylistic borders. Rebel Souls guitarist Jeff Parker and its cornetist Rob Mazurek are best-known for their membership in cross-pollinated outfits like Isotope 217 and the Chicago Underground Quartet-Parker also plays in Tortoise-groups that nonchalantly mix-and-match styles, drawing from an improbably broad palette. But Sirota has been playing with these guys for years. Parker, in particular, has been working with him since the late ’80s, when both attended Berklee. Their Boston group the Last Kwartet relocated to Chicago in the early ’90s.

Unfortunately for Sirota, his high-profile bandmates in Rebel Souls-which also include bassist Noel Kupersmith and reedists Geof Bradfield and Kevin Kizer-aren’t often available. “If I put too much emotion and effort into the group it can be frustrating because those guys are always gone,” he admits. “If I had my choice I’d work with this band or some variation of it and that would be my bread-and-butter. And if that was the case we’d have more time to develop the music. I’d really like to go into some different directions, experimenting with different sounds and electronics.” While the group’s future as anything more than an infrequently convened project seems bleak, Sirota’s not letting it get to him. He’s got too many ideas percolating to not brainstorm another invigorating group into existence-let’s just hope we get the chance to hear it.