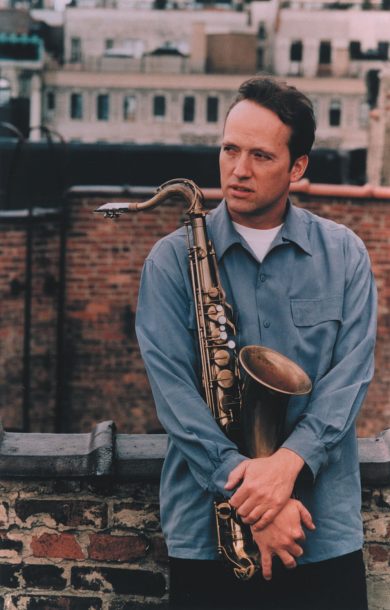 While in Buenos Aires with the Lincoln Center Jazz Orchestra, multireedist Ted Nash and a few of his bandmates opted to check out the city’s cultural scene rather than head back to the hotel after a gig one night. By 1 a.m., the musicians turned up at a tango club where dance instructors spun old vinyl and taught an eight-step. For Nash, the dancing was fun but the music was a revelation.

“Its funny how a lot of times when you think of certain things, you think of the cliché of that thing,” says Nash. “I’m sure people in other countries have a clichéd image of what jazz is-smoke in a club-you know what I mean? I had a certain clichéd image of what the accordion sounded like, looked like, the people who played it, what they wore. Same with tango music. [Sings the slinky tango line everyone knows.] The passionate dancing and the rose in the teeth. You have a clichéd image of tango unless you’re open to it and explore it.”

With the tango still on his mind, Nash returned to New York and hooked up with accordionist Bill Schimmel. Schimmel invited Nash up to his apartment just so he could show the reed player just what an accordion could do, Nash remembers. Nash has since built his band, Odeon, around Schimmel’s accordion, adding tubist/trombonist Wycliffe Gordon, violinist Miri Ben-Ari and balancing the drum chair between Jeff Ballard and Matt Wilson. Not at all a true tango band, Odeon gives Nash the opportunity to blend strains of tango with New Orleans second-line music, early swing and his own modern compositional interests. Anything but ungainly, Nash’s fusion works because all the styles he gravitates toward for his Odeon project share an openhearted romanticism and a hearty sense of humor-qualities that transfer undiminished to Nash’s music.

“A lot of contemporary jazz music-in the way people play and write music-tries to avoid something,” says Nash. “[Players] try to sound like they’re not in the Quarter, sound like they’re not dealing with the rhythm. In approaching harmony and everything, I’ve even spent a lot of time trying to get around the main point, which might be the major chord, the main root or the rhythm, which might be one and three or two and four-whatever it is. What is so similar about those two musics-the tango and the second-line music-is that they both embrace the rhythm and the harmony directly. They aren’t trying to run away from it. I think that’s why those musics work so well together.”

Having been a hotshot teenage saxman, Nash admits that he wasn’t always interested in compositional context or even who his sidemen were. After years keeping company with the Jazz Composers Collective and the Lincoln Center Jazz Orchestra, Nash has emerged as a confident soloist and a context-sensitive and open-eared composer. With his new Sidewalk Meeting (Arabesque), Nash’s first recording with Odeon and a follow-up to his string-infused Rhyme and Reason (Arabesque), the saxophonist’s fellow band members prove absolutely indispensable to Nash’s conception. Schimmel’s accordion anchors the group harmonically and rhythmically; Gordon either drives the music with his steam-engine bass lines on tuba or barks over it with his blues-thick and frequently plungered trombone playing; Wilson and Ballard both provide bouncing, melodic drumming; and Ben-Ari’s violin fashions Nash’s melodies with a singing, Old World lilt. On Sidewalk Meeting, Odeon demonstrates such a strong sound identity that when they cover Ellington’s “Amad” (from The Far East Suite), Monk’s “Bemsha Swing” and even Debussy’s “Premier Rhapsody,” they make it sound as if the material were written specifically for them.

“When I was a teenager and we had jam sessions, it probably didn’t make a big difference who I was playing with,” says Nash. “OK, great. I have a rhythm section so I can just play all these licks I’ve been working on. As you get older, you start to realize that the rhythm section and all the people you play with are important. You play differently with different people, and as you start to learn that, your music changes slowly. Now [my] music is very much based on the people that I play with.”