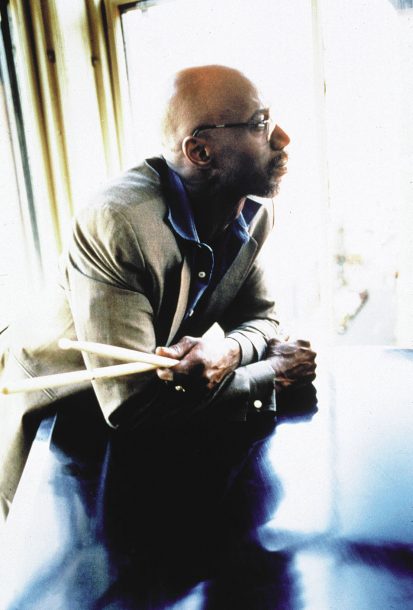 Drummer and bandleader T.S. Monk is a relative latecomer to a full-time jazz career. He grew up at the feet of his fabled father, took drum lessons from Max Roach, received a set of drums from Art Blakey and remembers frequent visits to the family home by a constant stream of jazz greats when he was a kid. But when Thelonious Jr. broke into the music biz as a leader in the 1980s, he took the R&B route. Then in 1991, Monk formed a sextet and dedicated himself to the music of Kenny Dorham, Walter Davis Jr., Hank Mobley, Clifford Jordan, Elmo Hope and his father.

Now, 12 years after his jazz LP debut, Monk heads his own label, Thelonious (theloniousrecords.com). A vehicle for his own recordings as well as for private recordings by his father, the new label was inaugurated in August with T.S. Monk’s Higher Ground, his sixth sextet recording, which attempts to modernize a Jazz Messengers-type sound. The second CD is the label’s first archival recording by his father, Monk in Paris: Live at the Olympia (from a 1965 concert). Plans are to release a string of previously unheard Monk performances in various configurations, including a lineup from the early ’70s that featured a 20-something Thelonious Jr. on drums.

Monk says the excavation of archival recordings by his father is about exposure and demystification. “For as much Thelonious Monk as you see in the racks, he was miserably underrecorded,” he maintains. “He was never recorded like Miles, Bud or Bird. They’ll be pulling stuff out of the can on Miles in the year 2075 because they recorded everything he did. But Thelonious didn’t have that kind of commitment behind him, so he started recording himself, and a lot of other people started recording him too, because they couldn’t get live recordings of him. Because Thelonious was such a real-time creator, he was at his very best live. He was never really predisposed to the studio, per se. What I’m hearing on these live recordings we’re putting out is what I remember hearing when I used to be under his seat at the clubs.

“It’s been said that Thelonious was just a genius and he did it his way because he couldn’t do it any other way,” Monk continues. “It’s not true at all. I have a home recording of Thelonious learning and transposing the tune ‘I’m Getting Sentimental Over You,’ through and up until he recorded it. And when you hear the process, you come to understand how he developed his thing. You hear the first version of this song, it sounds like Duke. In fact, it was the first time I ever heard my father completely divest himself of all those things that we know to identify him as Thelonious Monk. To me, this is very important historically because what it says is that much of what Thelonious did was in fact by choice. It wasn’t this sort of mindless noble savage thing where he woke up one day and all he could do was play funny chords and angular melodies. He chose this direction; it was an intellectual decision to play the way he did. I’m determined to get this kind of artistic information out to the public. Because when you demystify Thelonious Monk, he becomes more popular.”

As for his own new recording, Higher Ground, Monk hopes to appeal to what he calls the “cross-talking ear.” “I look at the marketplace as a series of ears-you got a rock ear over here, you got a hip-hop ear, you got a jazz ear. And then you got this cross-talking ear from this generation that was born in the middle of the last century. They’re the same people who grew up as college kids in the 1950s and 1960s listening very intently to Miles, Coltrane, Bird, Bud and my father but also came up with everybody from the Beatles and the Byrds to the Temptations, the Supremes, the Bee Gees before Saturday Night Fever along with Perry Como and Frank Sinatra and all of those things. This is my generation’s ear, and this musically sophisticated, very diversified cross-talking ear is addressed the least of all in the marketplace. That’s what [1999’s] Crosstalk was about, that’s what Higher Ground is all about. It’s me being exactly who I am, the same way my father was.”