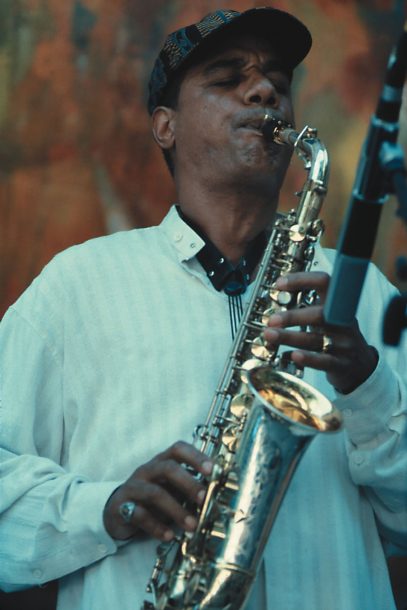 Ebullient saxophonic expositions in the pursuit of passionate jazz truth aptly summarizes the artistry of alto and soprano saxophonist-flutist T.K. Blue, aka Talib Kibwe. Under the marquee nickname T.K. Blue, Talib has released a sparkling disc for Bob Karcy’s fast-rising Arkadia Jazz label. Why T.K. Blue? “It’s a combination of nicknames. Blue was a childhood nickname growing up on Long Island. I was born Eugene Riney and I had a deep affinity for the color blue, so that went to Blue Gene. The Gene got canceled and it became simply Blue. T.K. has been a nickname for Talib Kibwe around the Spirit of Life Ensemble [he is musical director]. Bob Karcy suggested combining the nicknames,” Kibwe explains the moniker, which also stems from lazy folks’ inability to properly pronounce his name (for the record it’s Tol-ib Kib-Way).

Name game aside, Another Blue is but the second major release for the 40-something composer-arranger with the mean axes. Why’d it take so long? Patience is a virtue after all: “What people have to realize is there are thousands of deserving cats I know who are dying to make a record. It’s not like I didn’t want to; I’ve had aspirations since 1986 when I recorded Egyptian Oasis [for a Parisian label]. I’ve been composing since the ’70s.” Evidence of T.K.’s prowess and progress can best be measured via Randy Weston’s Verve efforts, as Kibwe has served as the big man’s musical director for nearly 20 years; the depth of that partnership can be measured by their “Night in Tunisia” duet on Another Blue.

“I’ve always felt my writing has been way ahead of my playing. I’m just now catching up on my playing being able to play tunes I wrote 15 years ago!” Evidence of his pen prowess can be measured on “Evening Prayer,” “Crossings,” and the celebratory “Pileau” on Another Blue, where he partners with such accomplished players as pianists James Weidman, Onaje Allen Gumbs, and Michael Cochrane, drummer Cecil Brooks lll, bassist Santi Debriano, trumpeter Eddie Henderson, and the great Weston.