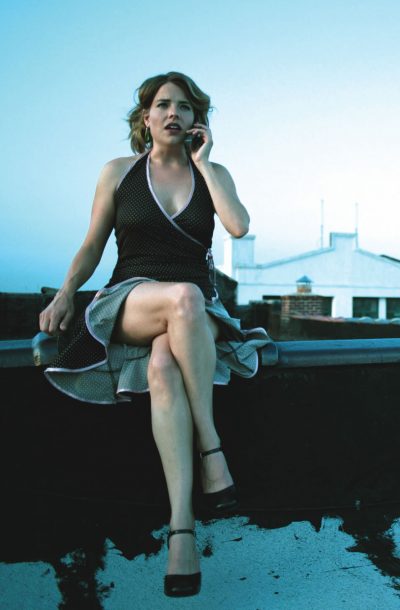 I reached my teens midway between the rock ‘n’ roll and disco eras, so my musical puberty was largely defined by such female singer-songwriters as Joni Mitchell, Laura Nyro, Carole King, Janis Joplin and the McGarrigles-women who marched to their own drummers while maintaining a refreshingly self-actualized beat. The generation after mine witnessed an equally bracing wave of pop-rock post-feminism from the women of Lilith Fair. Lately, another torrent has started forming. At one end of the spectrum is the indolent cool of Norah Jones. At the other is the fearlessly vibrant iconoclasm of Nellie McKay. Somewhere in the middle, judiciously juggling the two extremes, is London-born, Los Angeles-based singer-guitarist Sylvie Lewis, making a dazzling debut with her aptly titled Tangos & Tantrums (Cheap Lullaby), a collection of 12 tart, intelligent tunes.

A self-described “anachronism” with a sound and style that suggest 1920s cabaret overlapping 1950s bohemia and overlaid with postmillennial dynamism, the twentysomething Berklee grad senses she was “born about 50 years too late, given my tastes and my tendencies. There are certain views I have that others might consider antiquated. I am completely overwhelmed by technology and think it’s very sad that technological advances have completely superseded our spiritual growth. We’ve got a lot of catching up to do. Also, a lot of things really matter to me that no longer seem important to society. Like manners, for instance. It’s all about respecting people. I tend to agree with my grandmother a lot!”

As important as Lewis’ grandparents were in developing her strong moral fiber, they were just as instrumental in shaping her musical education. “My grandfather had a guitar and was a huge Django Reinhardt fan,” she enthuses. “My grandparents loved Noel Coward, and their music collection included beautiful things like Oscar Peterson and Harry Edison. I wonder if one’s born with certain tastes, because from an early age the stuff [in their record collection] had the strongest pull for me. Also, my parents would have these dinner parties and everyone would get a little drunk and my dad would end up playing piano and doing the most dreadful Louis Armstrong imitation amongst other embarrassing things. But there were various members of their group who really could sing. And I remember when I was about 10 years old there was this one woman who came in and sang ‘Autumn Leaves’ in French. I was transfixed. I thought it was the most beautiful song I’d ever heard. She told me I could get a recording of it by Edith Piaf, so I went out and bought a tape. When you start listening to Edith Piaf you fall in love with Johnny Mercer and his lyrics, which then leads you to all the people he collaborated with. So, the music of that era naturally became what interested me and what I was always looking for.”

Agreeing with the suggestion that much of Tangos & Tantrums deals with the stripping away of artifice and self-delusion in favor of honesty and self-awareness, Lewis believes “there are so many distractions in our society to prevent us from seeing who we really are and from seeing who other people really are. People have a lot of artful ways of keeping us away.” Anthems like “If Love Songs,” “Promises of Paris,” “Valentine’s Day” and “Conversation Piece” bring relationships, romantic or otherwise, into sharp, seductive focus. In “The Movies” she takes a gentle poke at her adopted hometown’s obsession with cinematic make believe, and in the bold “Rockwell’s Blues” she uses the homespun delusion of Norman Rockwell’s paintings to make a powerful statement about artists and writers. “It is,” Lewis opines, “fascinating to me that we can make incredible art yet be awful people, that there can be such a canyon between what we create and who we are. Look at people like Miles Davis or Chet Baker or Robert Frost. They made amazing art, were incredibly gifted and yet were so horrendous to everyone around them. That really interests me-how we present ourselves in our art versus how we really are.”

As for the album’s deliciously curious title, Lewis explains that she “loves [seminal tango artists] Astor Piazzolla and Carlos Gardel, and went to Argentina a few years ago just to get the vibe of being there. Although I don’t write tangos, I’m really interested in how tango music came about, [from] immigrants who came from Europe at the turn of the century to make money in Argentina and ended up far away from their loved ones, feeling very lonely in a brand new culture. A lot of people misconstrue tango as only this passionate, sexy dance when it’s more songs of loneliness and lust from people who have been removed from their family and natural surroundings. I’ve connected with that for the last few years.” And the tantrums? “Well,” she giggles, “I’ve thrown a few.”