Skip to content
Become a member and get exclusive access to articles, live sessions and more!
Start Your Free Trial
Home > JT Archives > Swinging for the Fences 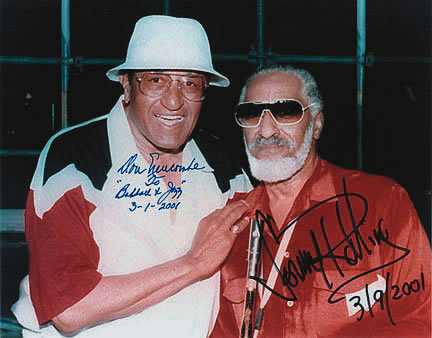 Like jazz, baseball is an American treasure. Both were celebrated in Columbia, Mo., on April 28, 2001, at the auction-fundraiser “A Night of Jazz and Baseball” benefiting the not-for-profit “We Always Swing” Jazz Series Endowment Fund and Education Project.

There were nine heavy hitter musicians on the stage-musical director James Williams, Von Freeman, Bobby Watson, Steve Wilson, Terell Stafford, Ray Drummond, Christian McBride, Tony Reedus and Sue Raney-and the selections served as tips of the hat to baseball: “The Sidewinder,” “Viva Cepeda,” “Newk’s Fadeaway,” “It Don’t Mean a Thing if It Ain’t Got That Swing,” and “Minor League.”

Director Ken Burns, of Jazz and Baseball documentary fame, and writer Gerald Early, who was featured prominently in both, were on hand to put jazz and baseball within a broader cultural context before an audience of over 700. Four former major-leaguers were feted and chosen for their jazz connections. Brooklyn Dodger Don Newcombe is well versed in jazz and plays golf with Ray Brown. He related that when it was difficult playing ball during the early days of integration, he took solace in looking in the stands and seeing Nat King Cole, Sammy Davis Jr. and his friend Billy Eckstine. The other big-leaguers included Carmen Fanzone (Chicago Cubs, Boston Red Sox) Tommy Davis (L.A. Dodgers) and Orlando Cepeda (San Francisco Giants and St. Louis Cardinals).

Sportscaster Bob Costas was also there, and though he may have been out of his realm musically, when asked about the connection between jazz and baseball he said, “This much I know for sure. The history of both prominently features a Duke: Ellington and Synder. A Dizzy: Dean and Gillespie. Charlie Parker’s definitely in the jazz hall of fame-if there is one-I don’t know if Dave Parker or Wes Parker will make the baseball of fame.”

About 170 jazz and baseball items were auctioned off to support “We Always Swing,” including a photo taken in 1995 and signed by Don Newcombe and Sonny Rollins called “Newk Meets Newk” (see above). Rollins was nicknamed Newk because when he and Miles Davis were taking a cab to Ebbets field in the early ’50s the cabbie thought he was Newcombe. Davis started calling him Newk from then on.

Following a theme set in both of Burns’ documentaries, Costas said jazz and baseball are able to “convey something human that connects the audience to the performers. There’s something poignant about a great player toward the end of his career or a season that winds down and winds up one game short of the pennant.”