Skip to content
Become a member and get exclusive access to articles, live sessions and more!
Start Your Free Trial
Home > JT Archives > Swingin’ Around the Mistletoe: The Guide to Surviving the Holidays—With Music 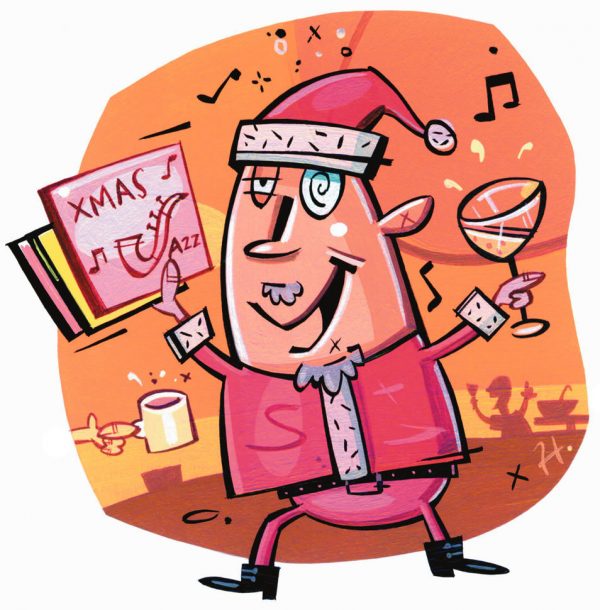 No good has ever come from playing “Mele Kalikimaka” at a holiday party. Trust me: I’ve been in charge of spinning the tunes at my mother’s annual Christmas Eve shindig ever since I was tall enough to touch needle to vinyl. And every time I try to force Bing Crosby’s kitschy Hawaiian swing number into the festive mix, all holly-bedecked hell breaks loose. Don’t get me wrong: The Binger’s Merry Christmas album, a big-band bonanza recorded in 1961, is a must-have in anyone’s wintertime CD collection. Just heed my warning and stay away from that last track: Once Crosby kicks off the luau, and the Andrews Sisters start shaking their hips in the background, it won’t be long until Uncle George gets rowdy with the egg nog, and Cousin John starts challenging the female guests to best-two-out-of-three leg-wrestling contests.

As most of us who no longer believe in Santa are morosely aware, the holidays can be a truly nasty time stuffed with swollen Visa accounts, maudlin Budweiser commercials and nagging self-doubts about another year down the drain. Because of this relentless sleigh-bell strain, the oft-dreaded holiday party-whether at work, at home, or at your mother-in-law’s house-is always an emotional powder keg. The crucial key to making these forced-smile fetes amicable and-on those ho-ho-ho rare occasions-pretty damn fun is the soundtrack. A bad music choice by the appointed DJ can mean the difference between caroling joyfully and kicking the living crap out of each other.

Case in point: If you wisely bust out Ray Charles’ funky and romantic The Spirit of Christmas (Rhino)-another must-have-chances are good that you’ll run out of mistletoe before the clock strikes 12. On the other hand, if cute niece Katie demands that you dust off Jewel’s preciously tinkling Joy: A Holiday Collection (Atlantic), then prepare to watch divorce papers fall faster than the snow.

As far as jazz musicians are concerned, recording a holiday album is apparently just as mandatory as cutting a Miles Davis tribute. But whereas rock and country music stars getting in the yuletide way is always a risk, jazz notables summoning the St. Nick spirit are more of a sure thing-especially when it comes to setting cool, calm, Merry Christmas moods.

So, dear reader, this is my gift to you and yours: The following are just a few jazz and blues Christmas albums sure to keep the party going strong-and crotchety Grandpa away from the liquor cabinet. If I’m wrong about any of these-and right around “Adeste Fideles” your creep y neighbor bare-asses the gingerbread house anyway-feel free to send me one of those awful fruitcakes (care of JazzTimes’ managing editor, of course).

Need to add a little class to your snowbound soiree? Nat King Cole’s The Christmas Song (Capitol) was remastered in 1999, and now features 19 tracks, including a bonus “duet” with daughter Natalie on the titular tune. (Don’t worry: Nat’s seminal 1961 version of the Mel Tormé-penned song is on here, too.)

When the partying masses get those dance-dance-dance looks on their brandy-blushed cheeks, cue up either the 18-track Jingle Bell Jam: Jazz Christmas Classics (Rhino) or the 14-track Jingle Bell Swing (Columbia/ Legacy), exhaustive compilations featuring a who’s-who of jazz heavyweights. On the former, check out the Chet Baker Quartet’s “Winter Wonderland,” an infectious toe-tapper with Baker’s horn seemingly darting and dodging through the flurry of last-minute shoppers at Macys; on the latter, ultimate party animal Louis Prima contributes two hot-stepping stand-out songs, “What Will Santa Claus Say When He Finds Everybody Swinging?” and “Shake Hands With Santa.”

Of course, there’s a moment at every jingle jamboree when the relatives run out of things to talk about-“Are you sure I’ve already told you how much you’ve grown?”-and Aunt Shirley inevitably starts spinning those horrific tales about her battles with bursitis. At that point, it’s time to call in some big guns, those discs that conjure both sugar-plum visions and the need to sing, sing, sing along: Spike Jones’ Let’s Sing a Song of Christmas (Verve), James Brown’s Funky Christmas (Polydor), the saucy compilation Swingin’ Christmas (Daddy-O/Royalty), and, for those who gather ’round the menorah, Shirim’s Klezmer Nutcracker (Newport Classic).

And, finally, once all the guests are gone, the last log has been plopped on the fire and cookies for Santa have been properly displayed, put on what I consider the greatest Christmas album of all time: Charles Brown’s Cool Christmas Blues, which includes extended versions of both “Merry Christmas Baby” and “Please Come Home for Christmas.” With Brown’s weary vocals, Clifford Solomon’s warm saxophone, and Danny Caron’s weepy guitar, this album is for each and every one of you-whether you’re good or bad, alone or in love, sick of your family or counting the minutes ’til you see ’em all again New Year’s Eve. Happy holidays, everybody-and hang in there.