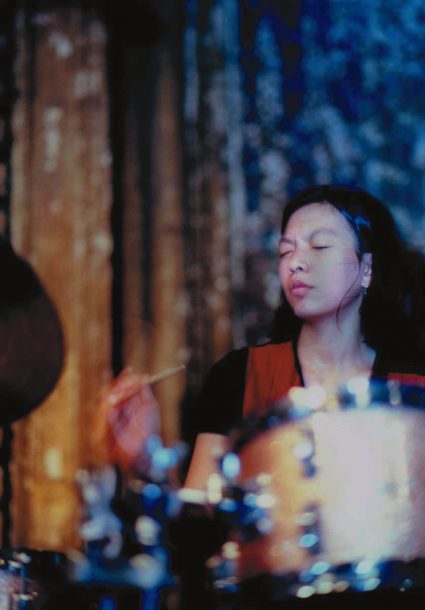 Last year Susie Ibarra made her move: the Brooklyn-based percussionist and composer left her high- profile gigs with the David S. Ware Quartet and William Parker’s In Order to Survive to form her own group, a trio with violinist Charles Burnham and pianist Cooper-Moore. To top it off, Ibarra and her husband, saxophonist-composer Assif Tsahar, set up their own record company, Hopscotch, to document their projects. (Her trio’s first CD, Radiance, was released late last fall to critical acclaim.) But Ibarra’s relatively short career was on the fast track even before last year’s flurry of activity: She has already played and/or recorded with many of the leading figures in jazz and creative improvised music, including Derek Bailey, Butch Morris, John Zorn and Dave Douglas.

For the Houston-raised Ibarra, music is all in the family. “I get my rhythm from my dad; he played piano by ear. All of us played piano and I sang in some choirs,” she explains. Ibarra also played classical music and performed in church, but the drumming bug didn’t bite until high school. “I played some in a band and for musicals. I just loved it; I couldn’t stop playing them,” she says. “I love the sound and I love to play grooves and rhythms. It’s an instrument I’ve found my voice on.”

So she moved to New York to become a jazz drummer, right? Not exactly. Ibarra actually arrived in New York on an art scholarship-fortunately, she brought her drums with her. “One of the first live shows I saw in New York was Sun Ra’s Arkestra at Sweet Basil and they just knocked me out,” she says. The performance, and the chance to study with Ra’s drummer Buster Smith, rekindled her desire to play creative music. Ibarra, a graduate of Mannes College of Music, had Milford Graves as a mentor, and she also studied with Vernel Fournier. Ibarra admits: “I’ve had a lot of great teachers.”