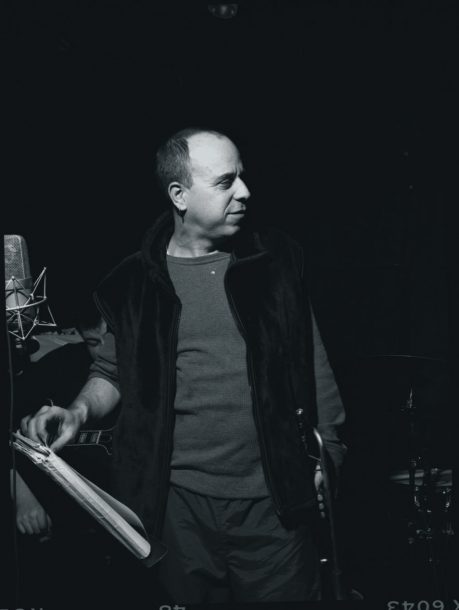 Diaspora Hollywood, the third installment in Steven Bern-stein’s Tzadik series, continues the fertile work begun by the trumpeter in 1999 with Diaspora Soul. First, Bernstein sought to link cantorial music with the “Gulf Coast sound,” spanning from Texas to New Orleans to Cuba. Then, in 2002, Diaspora Blues found Bernstein joining the great Sam Rivers to interpret melodies once sung by Cantor Moshe Koussevitsky. Diaspora Hollywood turns from free jazz to the more groove-oriented sound of Diaspora Soul; it is Bernstein’s homage to the work of ’50s L.A. arrangers, “first wave” Hollywood composers like Max Steiner and Jewish West Coast jazzers such as Shorty Rogers and Shelly Manne. Instrumentation- and personnel-wise, the album throws some curves: Pablo Calogero plays baritone sax, bass clarinet and flutes; D.J. Bonebrake, formerly the drummer for the punk band X, plays vibraphone; David Piltch is on bass and Danny Frankel handles drums and percussion. (Piltch and Frankel have worked together with k.d. lang.)

If synagogue music sounded this hip, might fewer kids flee Judaism after their bar- or bat-mitzvahs? The slow, earthy beats of “Yis May Hoo” and “Jehudis Bas Zion” would stoke the curiosity of any jam-band fan. Calogero plays a skronky, Bennie Maupin-like role, and there’s just a hint of Out to Lunch in the blend of flute/bass clarinet and vibes. Bernstein cultivates something of an incidental music stance on “King Kong” and evokes crime dramas on the dark “Meyer Lansky.” Unfortunately, three of the traditional melodies are mislabeled: “Havenu Shalom Alechum” is track eight, not 11; “V’shamru” is 11, not 10; “Sim Shalom” is 10, not eight. As for the “B’archu,” it’s never sounded grander.