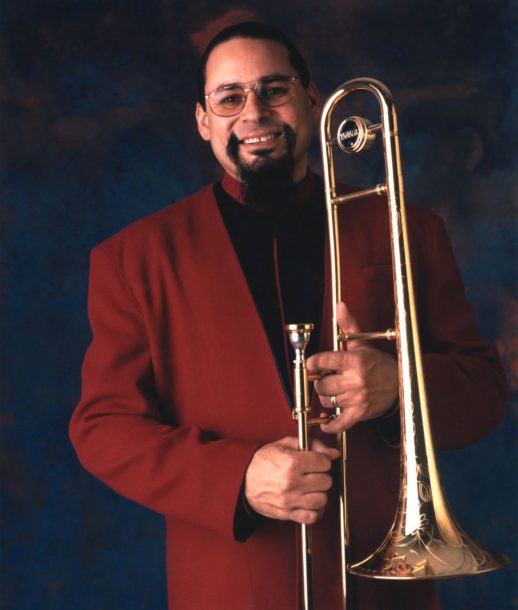 Steve Turre conjures as diverse an aural palette from his horn as any trombonist living. When he mutes it, it becomes virtually a different instrument. He then takes his cue from the pinched sonic texture of this instrument and creates challengingly narrow harmonic spaces through which he slithers and wriggles tightly, in contrast to the broad contours and extended range of his lines when he removes the mute and treats us to the full body of the trombone’s unfettered sound. When stretching upward he loses neither resonance nor dexterity, nor does he fall back on cheap-trick squeaks, smears or blats. When he does employ such devices they’re there for a reason (usually to inject a dash of humor or irreverence). There’s also a beefy muscularity to his tone that bespeaks a gentle, yet powerful, sensuality.

Although some critics still consider Turre’s conch shells to be a gimmick, they’re no such thing: Instead, they’re an armamentarium of voices with a range as challenging as that of any “standard” instrument. He plays them with great depth and texture, and creates such full and diverse sonic and rhythmic colorations from them that it’s sometimes almost impossible to believe he hasn’t fitted them with slides, valves and mouthpieces.

Akua Dixon, on baritone violin, contributes lines that sound almost percussive with their firmly delineated resolutions and sharp directional changes. Stefon Harris is his usual irrepressible self on vibes, expelling hornlike lines that twist in unexpected directions and discovering new contours and angles at every turn. Likewise, pianist Xavier Davis tempers Powell-ful bebop explosiveness with a meld of sensitivity and timbral sureness that exults melodic beauty even as it steadfastly avoids bathos or sentiment.

The title of this disk, as well as the bombastic salvo that introduces “Sanyas,” the opening cut, might indicate that this will be an exercise in self-aggrandizing “spiritual quest” pretentiousness-but in fact, quite the opposite is the case. Once they get down to business, Turre and his bandmates take us on a journey that’s spiritually uplifting, to be sure, but also hard-swinging and, for the most part, ebulliently down-to-earth and joyful.