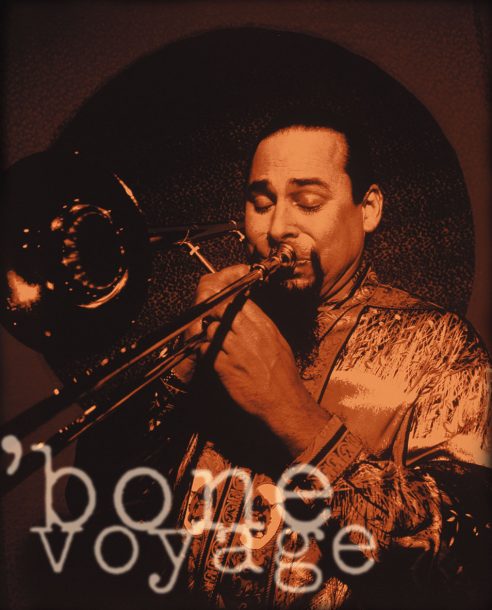 With J.J. Johnson curtailing his public appearances and Curtis Fuller slowed by ongoing illness, the chief keeper of the jazz trombone flame in the grand tradition of the masters is Steve Turre. Now in his late 40s and on the cusp of mid-career, the Bay Area native is more active than ever, with projects that range from leadership of straight-ahead quartets, to a sextet that includes his exceptional cellist wife Akua, on up to the 13-piece ensemble he’s touring this summer, not to mention occasional salsa and Latin jazz work, his bread and butter gig with the Saturday Night Live band, and the sideman work he still relishes with the likes of the Carnegie Hall Jazz Band, Steve is likely the busiest exponent of his instrument in contemporary music. The summer ’97 tour is on the heels of his new, finely crafted, and eponomously titled album for Verve, his sixth as a leader.

Dating back to his work with the likes of the Ray Charles band, through a stint with the Chico Hamilton band (which found him on Fender bass for a minute), time spent in Blakey’s Jazz Messengers, the ground-breaking brass- proud frontline he shared with trumpeter Woody Shaw for four years and 12 recordings, and with Rahsaan Roland Kirk’s keening Vibration Society, Steve Turre has been on a continuing upward development curve. Going through his recorded history one hears an obvious broadening and rounding of his tromboneliness, honing it to the superb, full sound he gets today. During our recent conversation from his New Jersey home, he explained that trombone mastery is an ongoing proposition. “I’m still working at it,” he suggested. “Its one of those things you work at throughout your whole life. Sound is the most beautiful thing and if you’ve got a pretty sound you can just hit one note and it sounds good. I’ve always been striving to have as beautiful a sound as I can.”

Turre can point to significant mileposts in his life that touched his trombone approach. “Two pivotal things happened in my musical experience that helped me develop my sound: One was a lesson of sorts. I was talking with J.J. on the phone when he was still living in L.A. about developing my sound, and he told me to play long tones soft. You want a big sound so you practice with a big sound, but he said ‘no, practice soft.’ When you can get it to be round and pretty when it’s soft, then when you play loud it’s gonna be round and pretty too. Just like when you want to play fast, practice slow, the same thing with sound. It was like ‘ding, I never thought of that,’ but it’s so obvious. J.J. said play so soft it hurts-so when a master tells you I just try to do it. When you get down real soft, it’s harder than playing as loud as you can, and it showed me something about control. J.J. had taken lessons with Arnold Jacobs, who is the great trombone teacher from the Chicago Symphony. When J.J. came back on the scene he was playing a lot of high notes, he never used to play them. I said ‘damn, J.,’ and he said he took a lesson with Arnold Jacobs.

“Next time I was in Chicago I called Arnold and in one lesson he showed me some stuff about breath control and breathing from the diaphragm, and one lesson changed the way I played! It was amazing, it opened up my sound and all of a sudden the air was flowing a different way and it opened up a whole new door. The trombone is a European instrument and it’s 400 years old, they’ve had that many years to develop the science of control. That doesn’t have anything to do with rhythm, harmony, improvisation…with feeling, it has to do with control of the instrument. I’m not going to turn my back on that knowledge,” Turre suggested emphatically.

Our conversation about sound and control of the peculiarities of the slide trombone led to a question about what some perceive to be a shortage of trombonists on the contemporary scene. “I don’t know about the schools, but I see more young trombone players coming up and playing good now, than when I first came to New York with Blakey,” in 1974. “I was the only young one coming up when I played with Art in the ’70s. And then in the late ’70s Robin [Eubanks] came to town and Slide [Hampton] came back from Europe. Then it wasn’t until the ’80s that Frank Lacy came around, and now there’s a whole slew of them. J.J. came back, some people started recording; Robin recorded, I recorded some things, Slide recorded…it’s like out of sight out of mind. And then the record companies say the trombone is not popular and doesn’t sell [he makes an exception for Verve, which has been supportive of his work, has recorded J.J., and distributed Eubanks from one of their former subsidiaries], and that’s bull…

“Every kid in school now wants to play the saxophone because of Kenny G, because they see it every time they turn around, so out of sight out of mind. But if you recall, back in the ’30s and ’40s Tommy Dorsey and Glen Miller, not to say that was the same kind of jazz we’re playing, they had million sellers, the pop music of the day. And they had The Music Man with “76 Trombones,” every kid wanted to play the trombone back then because they thought they could make money. That’s what the Kenny G phenomenon is about, they want to be a star like Kenny G.”

Steve’s work with Woody Shaw was one of the real touchstones of his career, what with the leader choosing to buck tradition with a trumpet-trombone frontline sound. “He took a lot of flack for that,” Turre recalled. “He’d always had a trumpet-saxophone frontline, and that’s a beautiful sound, it’s classic. But you aren’t going to get a better sound than Bird and Diz, or Sonny Rollins and Clifford Brown, or Miles with Trane or Miles with Wayne, or Woody Shaw and Joe Henderson with Horace Silver; it just don’t get any better than that! Woody had experienced all that so he said he wanted to try something different, and Woody and I clicked and the band was working, and everywhere we’d go the joint was packed because back in those days Woody was the number one cat. The club owners would complain, ‘man, why don’t you have a saxophone in your band, you need a saxophone.’ Woody said, ‘I need to have what I want, its my band. I appreciated that.”

For his sixth date as a leader, Turre chose an extraordinary shifting cast of 31 musicians, continuing on a path that finds each date evidencing a fresh conception. “I think the music has to evolve, rather than Home Alone 2 or Terminator 2, you know how they do; I wasn’t looking for that. Every time I would add different things to the mix. The first one [for Antilles, a Verve subsidiary] was the basic unit, the Sanctified Shells, ten pieces. I had Dizzy on there as a guest to play a solo and play castanets, but it was basically a ten piece. On the last one I added piano and saxophone, which opened up the sound, and added different dimensions to the textures. With the last one I even added vocalists, mallets-both marimba and baliphone-the string family, and of course some guest soloists in terms of horn and rhythm players, so I just keep adding to the mix. Some day I want to do some stuff with the log drums, I like all the stuff that’s got rhythm.”

“There’s no saxophone on this record, it’s all brass, strings, and percussion. The last one had a saxophone; this ain’t no Home Alone 2,” he laughed.” There’s 31 musicians on this record! I was a burn out, I was wiped out for six months after doing this; not just burning the midnight oil, but organizing, getting everybody’s schedule together. We did it in two days, it wasn’t an overdub project.” The record is strong evidence of both Turre’s continuing evolution, and his keen insights into maintaining a fresh sound. “I don’t like to do the same thing all the time, then you don’t get stuck in a rut. I wouldn’t want to work just the string sextet all the time, or just quartet all the time, or just the shell choir all the time. I’d like to ideally do a tour with the shell choir, then come back and do a week with the sextet, then go out and do some quartet concerts, just keep mixing it up. That keeps you growing, it keeps you flexible, it keeps you creative.”