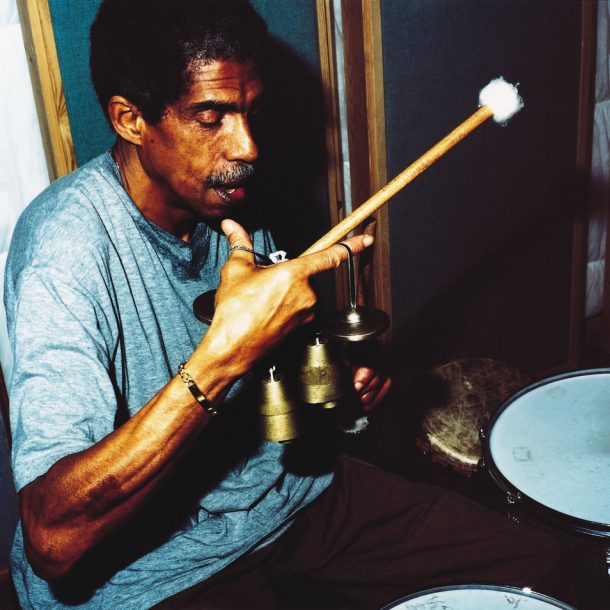 When Steve Reid talks about his fascinating life as a drummer or waxes philosophical about the state of jazz, three words pop up routinely in the conversation: cycle, rhythm and dance. Those terms also provide apt modifiers for describing Reid’s circuitous career trajectory and his infectious drumming and compositions. At 64, Reid has survived many of jazz’s stylistic permutations and the industry’s ups and downs, and in spite of a four-decade-long career during which he played with a horde of heavyweights, including Sun Ra, Jimi Hendrix, James Brown, Miles Davis and Jackie McLean, he’s not a household name.

“My thing has always been kind of weird. That’s probably why I’m not as established on the jazz map, because I was going to different places for years,” he explains over the phone from his home in Lugano, Switzerland. “Some people thought that I had disappeared or something.” He also attributes his obscurity to his discography as a leader, none of which is documented on high-profile labels such as Blue Note, Prestige or Impulse. “Most of my records were made outside the United States, and a lot of them are on vinyl and aren’t obtainable on CD,” he says.

Some of those vinyl-only LPs he’s referring to are his mid-’70s forward-thinking gems, Nova, Rhythmatism and Raw, all released on his own record company, Mustevic Sound, co-spearheaded with his old school friend, Joe Rigby. The British imprint Soul Jazz, however, reissued Rhythmatism in 2003, which paved the way for Reid to release 2005’s Spirit Walk.

His newest disc, Daxaar, is on yet another obscure label, Domino, and like he said, it too was recorded outside of the United States, in Senegal. Just as Reid constantly refers to cycles, Daxaar brings him back to one of the African countries he first visited when he left New York City in 1966. He stayed in Africa for three years, playing with the likes of Fela Kuti, Guy Warren, Randy Weston and the mighty Sierra Leone’s Refugee All Stars. On Daxaar, Reid teams up once again with electronica maverick Kieran Hebden (of the innovative electronica group Four Tet) and keyboardist Boris Netsvetaev to engage in sometimes futuristic Afro-jazz funk with young Senegalese musicians: bassist Dembel Diop, percussionist Khadim Badji, trumpeter Roger Ongolo and guitarist Jimi Mbaye.

The long open-ended grooves on Daxaar have a modal, almost deep house vibe to them. The pulsating title track, distinguished by Reid’s insistent four-on-the-floor backbeat, Netsvetaev’s swirling organ fills and Badji’s driving conga rhythms, recalls the spiritual deep house magic Joe Claussell cooked up with Jephté Guillaume a decade ago. “Dabronxxar” percolates at a slightly furious but danceable pace thanks to Reid’s good-foot drumming as does the magnificent “Jiggy Jiggy,” a bluesy, dancefloor romp that suggests what Marvin Gaye’s 1977 hit “Got to Give It Up” would have sounded like had he recorded it in Senegal.

That Motown bump he gives “Jiggy Jiggy” betrays Reid’s roots as a rhythm and blues drummer while growing up in the southeast Bronx. In fact, he got his first break at the age of 17 with Martha Reeves and the Vandellas, when she came to his school with the Motown Revue. He later put his rhythmic stank on her classics “Heat Wave” and “Dancing in the Street.” The gig also landed him the drummer’s chair in the Apollo Theater house band, led by Quincy Jones.

Reid attributes his formative years playing at various dances to the feet-friendly vitality of his rhythmic concepts. “My drumming has always been about getting the people happy and moving. When I got into jazz, I just kept that same flavor to somehow keep a rhythm happening,” he explains.

“Rhythm makes it easy for people to follow even if you go into strange places,” he argues. “Trane’s [mid-’60s] quartet was an example of that. When he took out Elvin Jones and put in a non-rhythm thing, [the music] was harder to follow, because it didn’t have a [rhythmic] base anymore.”

As adventurous as Daxaar is at times, it’s undeniably accessible, largely because of the music’s infectious grooves. When asked why he chose to record in Senegal, Reid replies, “That’s where the new music is,” then goes on to explain that because the country has a port city, its music scene isn’t as insular as those of other African countries.

“When I decided to go over there, a lot of people thought that the music was going to be with a whole lot of drums, cymbal crashes and screaming,” he says with a laugh. Reid says that he even kept Hebden and Netsvetaev in the dark in terms of what he had in mind. “I wanted to bring that southeast Bronx funk thing, the jazz flavor and their thing.”

Reid describes his Bronx stomping grounds as “real hoodie.” Nevertheless, he shares fond memories of growing up right across the street from Thelonious Monk on Lyman Place. “Monk used to come out on Sundays and direct the street traffic with his little dancing. It was a great time,” he laughs.

Before Reid settled on the drums, he’d played guitar and tuba. Citing Philly Joe Jones and Papa Jo Jones as two of his earliest idols, Reid began gaining a reputation as a commanding drummer from leading a little trio that played at some dive in Nassau County, Long Island. The first drummer he saw live that really blew him away was Art Blakey. “He was playing at a dance at the Audubon Ballroom, the same place Malcolm X was killed, opposite the Fats Green Calypso Orchestra. I think that was during Blakey’s ‘Three Blind Mice’ period.”

Blakey’s explosive brand of hard bop, however, wouldn’t narrowly inform Reid’s musical path. After returning from Africa in 1969, he became increasingly interested in the more avant-garde jazz of Ornette Coleman, Sun Ra, Charles Tyler and Arthur Blythe. Oddly enough, Reid now blames the extremities of the avant-garde for reducing the jazz audience. “I’ve played avant-garde with guys who could play anything. Trane and Albert Ayler and Pharoah Sanders just decided to play avant-garde,” Reid explains. “But you had some guys who came into the avant-garde that could only squeak and shout.”

Perhaps, another attraction for Reid into the “New Thing” of the late ’60s and early ’70s was the Black Panther Party, which he joined while attending Adelphi University. “It was an exciting period. We actually changed something. They have demonstrations and stuff now but nothing gets changed,” Reid claims. When the U.S. government was drafting troops for the Vietnam War, Reid held onto his leftist principles and refused to register for the draft. His decision landed him a four-year prison sentence, in late 1969, at Pennsylvania’s Louisburg Federal Penitentiary, where he served alongside Jimmy Hoffa.

But instead of breaking his spirit, the prison experience strengthened his independent drive. After his release on parole in 1971, he worked profusely, doing numerous sessions with the likes of Dionne Warwick, Horace Silver and Freddie Hubbard, as well as on and off-Broadway stage productions. During this time, he also gained some significant experience working with Charles Tyler and Sun Ra. Then in 1974 he reconnected with Rigby to create the Legendary Master Brotherhood and the Mustevic Sound label.

Like many musical kindred spirits such as the Art Ensemble of Chicago, Julius Hemphill and Frank Lowe, Reid began touring and recording extensively in Europe. He eventually settled in Switzerland, even though he still splits his time between there and his home borough of the Bronx.

It was in Europe where Reid met Hebden, whom he refers to as his newfound “musical soul mate.” The two were paired together by a concert presenter for a new project at Paris’ Cartier Foundation in 2005. That same year, they released the critically acclaimed duo discs Exchange Sessions Vol 1. and Vol. 2 (Domino). Hebden contributed greatly to the Steve Reid Ensemble’s Spirits Walk, then the two collaborated in duo format again with 2007’s Tongues (Domino).

Reid’s new alliance with Hebden has garnered him significant attention in the expansive electronica music scene, something that he says is opening doors for younger jazz fans. It’s something that keeps him both optimistic and realistic when it comes to the survival of jazz, especially in times when so many people are bemoaning its dwindling and/or graying audience. “There’s an audience for everything. Just look at some of this shit on television,” he says with his customary robust and gruff laugh. “[But] the jazz audience is getting younger, because these kids equate Sun Ra and Pharoah Sanders with Monk and Miles; it’s all the same to them. The kids don’t compartmentalize jazz like the older audiences did.

“Jazz is dying and being reborn just like the music industry,” he continues. “It’s very exciting for me, because I see a lot of changes coming. This electronica is opening things up. I’m just happy to get another record release because we all can’t work for Starbucks and sell our records to the newspapers,” he jokes with another vigorous chortle.