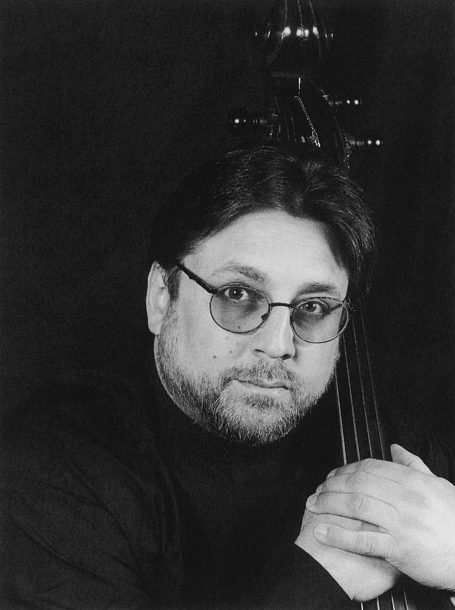 “Mingus is one of my biggest idols,” says the 47-year-old, who resides with his family near the Delaware River where New York, New Jersey and Pennsylvania all converge. “Charlie Mingus is the whole reason I decided to get into jazz and play the bass for a living. His record Mingus Presents Mingus was one of the first jazz albums I heard. Man, it blew me away! And that’s where I got inspired. All these many years later I teach a music history class at William Paterson [University] during the summer for high school kids and that’s one album I always play. It seems to affect the kids today the same way it affected me when I was just getting introduced to this music.”

Ornette Coleman has also had an impact on LaSpina’s writing, as heard on “Let Me Go,” an Ornette-ish piece that also bears a riff from “Never Let Me Go.” As he explains, “I spent a lot of time listening to Ornette Coleman in my formative years, especially the band with Charlie Haden and Ed Blackwell. That was one of my all-time favorite groups. I remember specifically playing nothing but Ornette for months until the guy I was rooming with went nuts.”

And although the Mingus and Ornette influences do weigh in on The Bounce, those are not necessarily qualities that jazz fans would associate with this longtime sideman. “That’s always been one of my problems,” says LaSpina. “I’ve always ended up with those real traditional kind of gigs and people tend to remember me from that. And since I’ve hooked up with SteepleChase it’s become an outlet for me to really put it where I want it.”

Born in Wichita Falls, Texas, on March 24, 1954, LaSpina first learned about his instrument from his bass-playing father before pursuing music studies at the University of Illinois. In the Chicago area during the early ’70s he worked frequently with the likes of Bunky Green, Rich Corpolongo, Sonny Stitt, Chet Baker, Marian McPartland and Joe Daley while also holding down a trio gig with guitarist Ross Traut and drummer Paul Wertico. After moving to New York City on April 1, 1979, he became in-demand on the Big Apple jazz scene, racking up credentials with Stan Getz, Mel Lewis, Benny Carter, Toots Thielemans, Richie Beirach, Al Cohn, Zoot Sims, Tommy Flanagan, Susannah McCorkle, Mark Murphy and Jim Hall, whom he continues to tour with off and on to this day.

LaSpina’s quintet of guitarist Vic Juris, saxophonist Billy Drewes, trumpeter Dave Ballou and drummer Jeff Hirshfield has been an uncannily flexible working unit for the past five years. “With that group I can do almost anything,” says the bandleader. “I know I can throw whatever I want in front of those guys and they’ll grab it and run with it. It’s a real team effort kind of thing and the more we get to play together the more I wish I could do it full time.”

They demonstrate that seamless team chemistry on The Bounce with a radical reworking of the standard “How Deep Is the Ocean?” and on a gorgeous reading of Monk’s “Ask Me Now,” which is buoyed by LaSpina’s signature resonant tones. Says LaSpina about his unique instrument, “It’s an old French bass I bought from [luthier/repairman] David Gage 12 years ago. It was probably made somewhere between 1806 and 1840, nobody’s quite sure. All I know is it was the answer to my dreams when I found it. When I first heard it, I knew I had to have it. With that instrument I was able to get the big sound that I always heard in my head.”

Unfortunately, while on a recent tour of Europe with Jim Hall, LaSpina watched in horror as a Lufthansa cargo crew dropped his prized instrument several feet from a loading dock, smashing the neck. “They had to carve a whole new neck for the bass,” he says. “It could come back sounding really great but then again I won’t know until it’s physically back together. It’s an incredible instrument for recording because it’s just even all the way up and down the neck; nothing really jumps out. It’s just a beautiful sounding instrument and I can’t wait to get it back. Hopefully it will sound like it did before, or even better. And it may be a couple months down the line before I find out.”