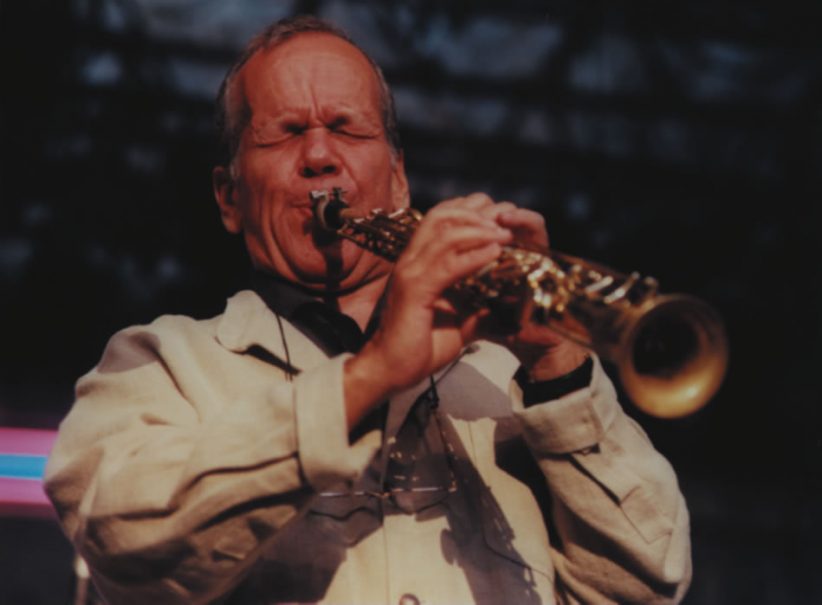 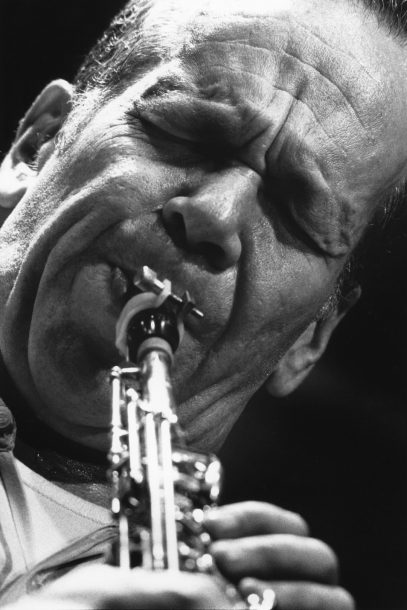 It was a very European ceremony. Television crews and photographers began to jockey for position at noon on the terrace of the Gran Hotel Maria Christina. Well-starched waiters dispensed champagne to the mingling guests. After welcoming remarks by San Sebastian Jazz Festival-Donostiaka Jazzaldia producer Miguel Martin, San Sebastian Mayor Odon Elorza Gonzalez presented this year’s Donostiako Jazzaldia Prize, the 32 year-old Spanish festival’s award for lifetime contributions to jazz, to Steve Lacy. The presentation of the silver-laden plaque triggered a locust-like whir of camera shutters and auto-advances. Then came the volleys of questions in rapid-fire Spanish, which Lacy gamely fielded with the aid of an interpreter. After toasts and networking, the Mayor was off to his next appointment, the media were off to file and edit, and the guests meandered off, primed for lunch.

“Now that we moved, I have enough space for this in the ‘trophy room,'” the soprano saxophonist remarked about the plaque as the honoree’s lunch party queued to be taxied to a mountain top restaurant (where Lacy slyly ordered Monkfish). Lacy was referring to the three-story house in Northeast Paris he and his wife, vocalist Irene Aebi, recently leased. Though their apartment in the Marais was the stuff of Paris jazz legends-the walls were covered with works by, among others, Kenneth Noland and Brion Gysin; the white upright piano sported red keys instead of black; instead of sheet music, art books laid open on the music stand-the air was bad, the street noise went on all night, and there wasn’t a tree or green space in sight. Yet, the move does not mark the end of an era as much as signal the beginning of a transition.

Lacy is generally fed up with Paris (“it’s not swinging”), and with French cultural politics specifically; earlier this year, Lacy was passed over for the directorship of the L’Orchestre Nationale de Jazz, and an artistic-control dispute with the all-powerful Banlieues Bleues festival forced Lacy to produce the Paris debut of his latest large-scale work, The Cry, on his own (Lacy sold out the Dunois Theater for the three-night run, which yielded a recording to be issued next year on Black Saint). Yet, even though an internal magnet seems to be pulling the 64-year-old Lacy back to the States after 30 years in Europe, Lacy isn’t hastily quitting Paris; his whole network is there: his dentist, his soprano technician, associates like Vincent Laine, who oversees both Lacy’s publishing concerns and his website (http://www.imaginet.fr/~senators) and long-time collaborators like bassist Jean-Jacques Avenel and drummer John Betsch.

Yet, Lacy is already laying the groundwork for a future homecoming. His fall excursion with Avenel and Betsch is his most extensive North American tour ever, and rides the heels of one of his best selling albums in the US, the trio’s Bye-Ya (Free Lance). The next, and perhaps most crucial step, is the projected ’98 North American tour of The Cry. The most dramatically charged of Lacy’s large works, The Cry was initially a collaboration with Taslima Nasreen, the Bangladeshi poet whose outspoken feminism prompted Islamic clerics to issue a fatwa, a death sentence for blasphemy (a fatwa drove Salman Rushdie underground). Though her live recitations were dropped after the Berlin World Premiere last year-it’s difficult working with someone whose Berlin apartment building is swept by a bomb squad several times a day, who is hesitant to appear on stage without a bullet-proof glass shield, and who basically doesn’t get jazz-Nasreen’s riveting texts about a woman’s fate in an oppressive Third World culture and her cause celebre status gives The Cry both a timeliness (very few in-depth reports on the 50th anniversary of independence for India and Pakistan omitted references to the grinding, feudal oppression most women experience in the sub-continent) and a timeless universality. A production that is decidedly more portable than ’83’s Futurities (fewer musicians, no dancers, simpler decor), this cycle of 12 songs scored for voice, two winds, harpsichord, accordion, bass and percussion, represents Lacy’s best chance to have his fully matured approach to a performance-based merger of text, music, and image presented in his homeland.

The Cry’s reception on disc and on stage by North American audiences will be a commentary on the relationship between recognition and marketability. Precious few jazz artists have received as many honors comparable as Lacy, starting with the big enchilada, the MacArthur Fellowship. Yet, while albums ranging from Reflections (OJC-the first-ever Monk tribute celebrates its 40th anniversary next year) to The Way (hat ART-Lacy’s first major work, pieces of which first appeared on disc in the ’70s) have achieved classic status, there is a pronounced familiarity deficit, even among self-professed Lacy fans, when it comes to Lacy’s art songs. Having been in circulation for a quarter-century, “Bone” from The Way now prompts boisterous audience sing-alongs, as was the case when Lacy’s Trio + 1 (the “1” being Aebi) closed with it at San Sebastian. And, Lacy’s melodies can stick like glue: a man approached Lacy in San Sebastian, having heard him perform 12 years before, and sang “Prospectus” note for note, just to find out the title (a great version is on hat ART’s recent expanded reissue of Blinks). Yet, works like The Cry aren’t written to be shelved for 20 years; they have to be heard in their altogether unfamiliar newness; and, that’s the rub with which Lacy is all too familiar.

“I think it takes 20 years for an audience to become familiar with a body of work, familiar enough that they can sing it and swing to it,” Lacy reflected in a later interview. “It was like that with Monk, really. People knew right away that Monk was a genius, but it took much longer for people to become familiar with the tunes and to become comfortable with them. It’s only when you’re familiar with them-comfortable, really-that you can sing them and dance to them. This is why Roswell Rudd and I had the group in the early ’60s that only performed Monk. We felt that if we played them over and over every night for weeks and weeks, we could become relaxed, and then the pieces could swing.

“This is the same idea I’ve had about my own pieces, but I’ve always had the frustration of not being able to perform the large pieces like The Cry often enough. That’s why I kept the Sextet together for 20 years, so that the music could grow. What we do is complex, and we have had a lot of resistance through the years, because people are not used to hearing literature with jazz. If the music is based on literature, you’re going to have very unusual forms. You’re not going to have regular 4, 8, or 12 bar sections; you’re going to have 9, 11, or 23, and measures of 3, 5, 6 or 7 next to each other. Very few words fit into those standard forms. We use poetry, prose, newspaper clippings, postcards and telegrams, and it almost never falls into 4-bar phrases and almost is never in 4/4. And, the words determine where the music is going to go. When I set Taslima’s words to music, I wrote the melody, then the keyboard part, and then the bass part; but, by the time I had the beginning of a melody, it’s clear how the words will determine the shape of the piece. It was through the words that I realize that the piano parts should be harpsichord parts, because the harpsichord is a very intimate instrument, and conveyed the intimacy of this woman’s story; then I began to hear the drone of the harmonium behind the words, as in Indian music, so I added the accordion…

“This is a very complex proposition that has to work as jazz, so it takes maybe a dozen performances of a work like The Cry for the piece to really unfold and become itself. Each time we perform it, it’s different. That’s why we called it ‘a jam opera,’ because the musicians are jamming on the music; each time we perform it the solos are different and the improvisations are different, and that effects the manner in which the songs are done. Each time we perform it, we know a little more about the work, we know it better, we’re more comfortable and more free with it. It’s exactly like playing Monk in the group with Roswell; it’s the same idea. Now that we’ve performed The Cry in Berlin, Italy, and Paris, we’re at the point where we’ve discovered how the whole thing fits together, how the language structures that are put into dance forms in the piece-there’s a waltz, a rumba, a tango and others-and how all of these dance forms are worked into the cyclical and narrative structure of the piece. It has a dance cycle as well as a language cycle as well a jazz cycle; for me, the piece also has to hold water dance-wise, because it’s the dance aspect of the songs that makes the words swing. And, the words have to swing, because the piece is about the transformation of words into music, and the power and danger of words.

“Words are the reason Taslima has a price on her head; to say that women must have control over their own bodies is very dangerous in some parts of the world. There was a real danger for her to perform with us in Berlin; it inspired our costumes, which are vests printed with the texts-we called them ‘bullet-proof vests.’ The danger, however, became a selling point, which was the beginning of the problems with the festival in Paris. Taslima had quit the project-she had severe stage fright, she couldn’t take the jazz, and my original idea of her interacting with the musicians in performance just didn’t happen. But, the producer thought he needed the danger surrounding Taslima to sell tickets. It was my position that The Cry is my body and I have the right to modify it any way I want. So, I produced it myself, and it really was like the old days when we had to make it happen ourselves, put up posters, everything. I found a theater that was free the same nights we would have performed at the festival, we presented the piece three nights in a row, and sold out the theater each night. It was a struggle, but the struggle to produce the piece and the opportunity to perform the piece three nights in a row left us knowing the piece much better, and knowing why we’re doing the piece, to make it come into its own. And it has.”

Steve Lacy 2, 5 & 6: Blinks  (Hat Art): “Beautifully remastered recording. The group at is its best, cohesive and swinging, especially ‘Cliches.’ I like the way the voice and strings are integrated, and O.J.’s (Oliver Johnson) drums.”