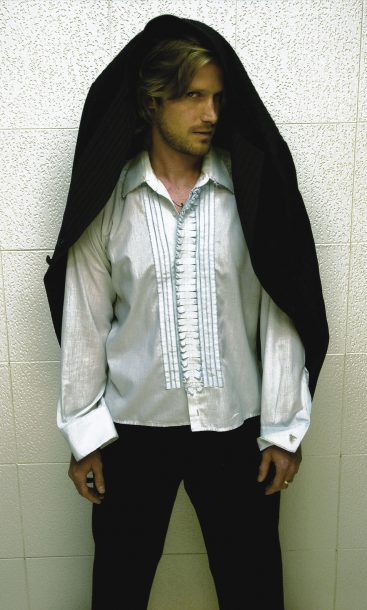 Our CD shelves are sagging with great contemporary female vocalists, extending from Allyson (as in Karrin) to Wilson (as in Cassandra and Nancy). But the number of male counterparts continues to lag far behind, which makes this sophomore release from Steve Evans most welcome, particularly since Evans continues to eschew the Rat Pack-wannabe path followed by so many of his peers, opting instead to shape a much more intriguing and inventive musical journey. Indeed, 2 Sets, the powerhouse follow-up to his standards-based eponymous debut, suggests that he might be en route to rivaling the dynamism of fellow Chicagoan Kurt Elling.

Some may find it a tad pretentious that Evans has opted to deliver this 15-track session, which could easily have fit on a single CD, across two discs. But, as he explains in the liner notes, this was originally intended, two years ago, as a live recording. When technical difficulties aborted that plan, Evans says he “wanted to record something that would still contain the live sound that is so often lost in the studio,” so recorded these two sets “as in a concert setting. The goal was to hit the ‘record’ button, start at the beginning of Set 1, and keep going until that particular set was finished.” No listening back, no overdubbing, no pitch fixing, and not a single redo. So, two half-hour sets build around Evans’ distinctive sound-a rumbling, full-bodied voice that suggests rough-sanded oak-and a compellingly inventive playlist.

Stellar selections from the Nick Drake and Tom Waits songbooks fill nearly half the tracks, including Drake’s pensively optimistic “River Man” and gently self-affirming “Things Behind the Sun,” plus a treatment of Waits’ “Jockey Full of Bourbon” as decadently vibrant as Mardi Gras and an equally spirited “The Part You Throw Away.” As for standards, Evans here favors mellow ballads, with stunning readings of “There’s a Lull in My Life,” “Ill Wind” and “The Night We Called It a Day” that suggest the detached intimacy of Chet Baker, then takes a 90-degree turn for a delightfully different interpretation of Tom Jones and Harvey Schmidt’s “Soon It’s Gonna Rain,” from The Fantasticks, that’s filled with cloud-bursting ebullience.