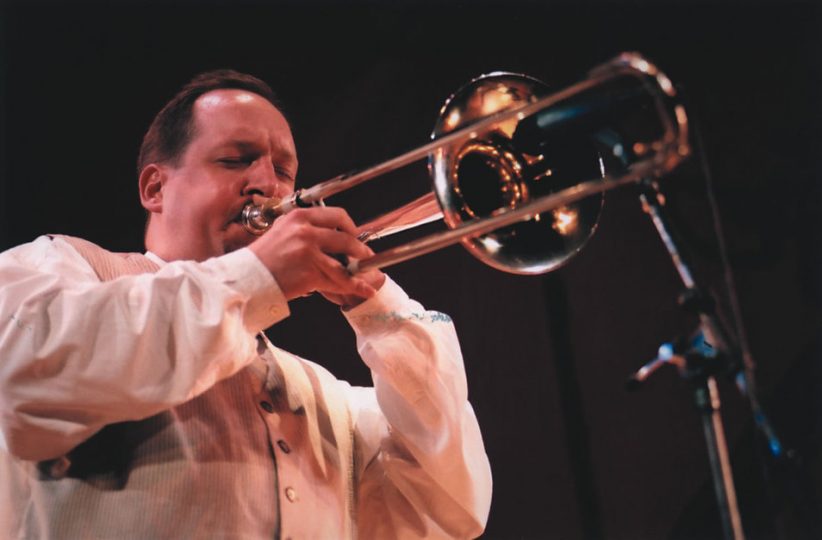 Trombonist Steve Davis comes from a musical family, but not in the traditional sense. His parents were not professional musicians, but music lovers, especially his father, who had a large record collection at their Binghamton, N.Y. home. “It was through him that I heard ‘The Sidewinder,’ Lee Morgan, for the first time when I was about 14 years old, and that had a very big impact on me.”

Ironically, around the same time, the then trumpet-playing Davis switched to the trombone. By the time he heard Horace Silver’s “Nutville,” with J.J. Johnson, and Art Blakey’s early 1960s Jazz Messengers with Curtis Fuller, “Man, forget it, you know?” he chuckles, “I was all the way in at that point.”

Fuller and Davis have in recent years become close friends, performing together in Fuller’s sextet in 1998. Regarding the Curtis-like logic and flexibility of his own arpeggiated improvisations, Davis comments, “As much as I love Curtis, and as close as we are, I think inevitably it all comes back to J.J.”

After studying with Jackie McLean at the Hartt School of Music, Davis joined the last incarnation of Art Blakey’s Jazz Messengers, in 1989. He worked with McLean from 1992 to 1997, then joined Chick Corea’s Origin, a formidable band that also features saxophonist Steve Wilson and bassist Avishai Cohen.

Over the last five years, Davis has recorded several outstanding CDs of contemporary hard bop for Criss Cross, both as a leader and as a member of the sextet One For All, with drummer Joe Farnsworth, tenor saxophonist Eric Alexander, pianist David Hazeltine, bassist Peter Washington and trumpeter Jim Rotondi. Check out Davis’ Vibe Up! on Criss Cross, or the gentler but equally compelling Portrait in Sound on Stretch Records.