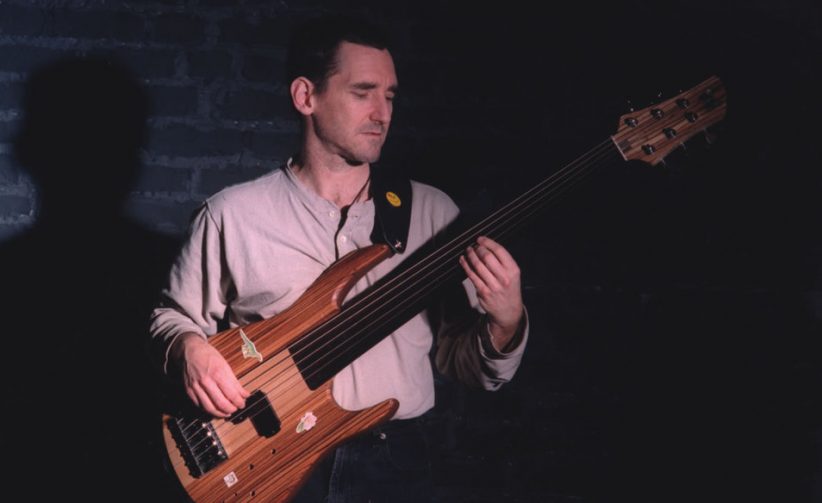 What would it sound like if Count Basie asked Stravinsky to write up some charts? Pomegranate (Cryptogramophone), the new release by contrabassist Steuart Liebig.

How Liebig ended up with Pomegranate is not entirely clear, considering he began his music career splitting time between his rock band and stints in the not especially compatible bands of Julius Hemphill and Les McCann. The recording consists of four long pieces scored for a chamber ensemble populated by frequent Liebig collaborators: he composed the first two with Varner and Dresser in mind, while saving the final two for SoCal improvisers Vinny Golia and Cline. “It was a very intense process,” says Liebig of Pomegranate. “Basically it took about a year, from inception. I’m really pleased that I actually finished it.”

Liebig, who conducts large sections of Pomegranate, did not save himself any solo time. If you hear him at all, it’s playing ostinatos or short descending bass lines beneath key changes. Lest you think he’s all pencil and no play, however, cross-reference Pomegranate with the rumbling Antipodes (Cadence). His other new recording features his free improvising trio (including multireedist Golia and drummer Billy Mintz) on material that’s the inverse of Liebig’s 300 measure Pomegranate scores.

“I like doing that band is because it flexes different muscles, for me. The tunes are nowhere near the complexity. But I don’t want people to think that all I do is write,” he says.

Antipodes exposes not only Liebig’s improvisation skills but also his unusual take on an instrument uncommon in free-improv settings-or classical/jazz fusion for that matter. Liebig’s six-string electric gives him a range that stretches from the bottom of a typical bass guitar up through the low end of a guitar’s, and he takes advantage of it. More than once Liebig’s playing alone has been mistaken as a two-person attack, presumably with some uncredited phantom player. He has also cultivated an airy, wide sound that borrows characteristics from acoustic and electric instruments.

“The guys who are the real names on the instrument use a lot of treble and play with a really clicky sound,” says Liebig. “They also play with a very pointed attack, which doesn’t really diffuse. That’s what I like about the acoustic bass: it lays out a bigger footprint. On an acoustic, though, a lot of times the decay is faster. The electric bass is that its somewhere between a guitar, an acoustic bass, an electric bass and a cello. I have all this expanded range and it gives me a lot of orchestral capabilities. On [Antipodes] I’m doing stuff that’s much more guitaristic up in the cello range. I think I’m veering pretty far away from standard electric bass practice.”