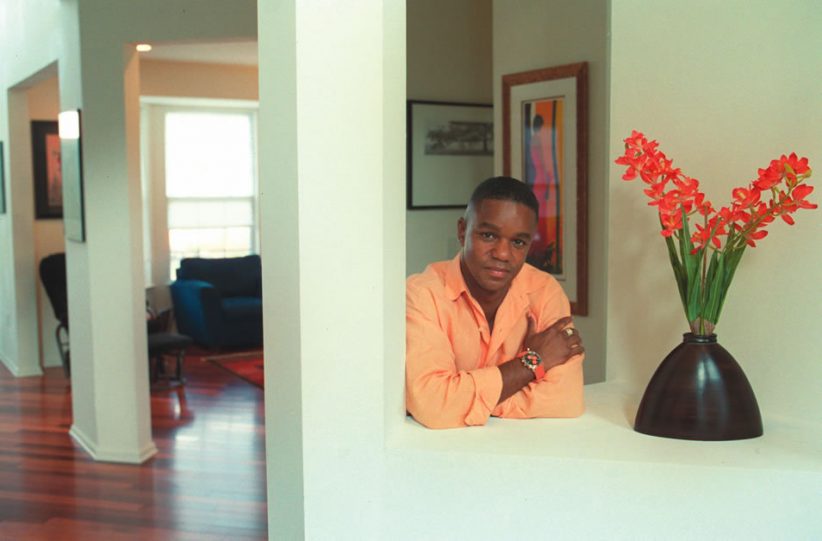 With its white walls, neatly placed paintings, spare decor and extremely tidy appearance, vibist Stefon Harris’ suburban Sayreville, N.J. home has “decorated by spouse” written all over it–only in this instance, that spouse is Harris.

Slightly over a year ago, Harris, 33, and his wife Shané, 32, joined those legions of metropolitan area residents who realized that while New York City may drive the region’s cultural engine, there’s something to be said for having a little room to stretch out. For Harris and his wife, that was found in a fairly new housing development between several major highways and the Northeast Corridor rail line in central New Jersey, where lawns are still sprouting and the utility poles are way taller than the trees.

“I lived in New York City for about eight years, and I found it to be extremely inspiring and I learned a lot. But after a while, I found that I was spending a lot of time at home and I wasn’t necessarily going out,” he said. “For me, creatively, it’s really important that I have a comfortable home environment. So, to be in New York City I couldn’t have as much space as I have now,” he said.

The Harris home is still a work in progress. Approaching it from a local thoroughfare, you can sense where old truck farms must have been plowed under for new subdivisions. Even Harris admits there’s still work to be done, as evidenced by the muddy tread marks left across his driveway by landscapers and the miniature tractor parked outside his patio door.

“Space is really, really important to me creatively,” he explained. “I put a lot of attention into it, whether it’s furniture choice or colors-just the general mood of the house-because I spend so much time there.”

While Shané naturally has a say over what occurs around the homestead, the public areas of the Harris home have more of Stefon’s touches, probably because he’s there when not performing, while his wife is either working at the Prudential Foundation in Newark or studying for her master’s degree in public administration at New York University.

“My wife has decorating ideas also, but I’m really into interior design and focusing on the space around me,” he said. “I think it’s just the type of person I am. I’m conscious of the way I dress and the way I speak and what I read and how I live my life. I’m a very analytical person.”

Come back in a year or so and you’ll see the result of the backyard project, where the Harrises are schlepping in boulders to complete a Japanese garden against the gently sloping Middlesex County hill. It will serve as both decoration and inspiration. “Just having quiet time-time to be still is really nice. That’s why I’m doing my backyard, because I need a place where I can go outside just to be at peace,” he said.

Even the mostly empty parts of the Harris home seem to be decoratively planned. An unfinished basement recreation room is empty, save for a pool table. Yet the quilted silvery foil insulation on the walls looks like some sort of fancy design touch.

“I don’t want to sound like I’m too intense, but when I do have what we would call ‘down time’ at home, there’s so much that I want to learn about the science of music that I do spend a lot of time studying music. It’s an amazing science and it takes a lifetime of work,” he said. “I find that with my touring schedule and recordings and just being so busy, when you’re really focused a lot on creativity, it can be a distraction. You don’t have a lot of time to really develop and get better.”

The home’s interior decorating scheme-light-colored walls with occasional objects or paintings adding surprising vivid splashes of color-are a reflection of Harris’ personal style, he said. “My theory with how to decorate is your house should feel like an incredible outfit. It should look like the colors you want to wear when you’re going out,” he said. “I tend to decorate my house according to that. I like sharp lines. I don’t like a lot of rounded shapes. It tends to be a little cold, but I find that it’s more creative for me. I don’t like a real homey, comfortable type of feel. I wouldn’t call myself formal, but even at home I’m very analytical and conscious of the space around me.

“My home shouldn’t feel like I come in and I just fall asleep there. I want my home to inspire me, because I work here, so I have to be able to look at a painting that’s on the wall and to imagine things,” he added.

“When I spend time with my wife,” he said later, “then it’s totally just what we want to do together. That can be watching a movie, taking a walk, whatever.”

“M&Ms with peanuts, those are pretty high on my list. I love chocolate, so chocolate mixed with peanut butter, Reese’s Peanut Butter Cups. I can handle grandma’s chocolate cake, too. But I will say I’ll put in a couple of extra laps every time I have a slice of that cake.”

“I’m a BMW man all the way. My wife and I both drive BMWs…3 series. I’ll probably drive BMWs the rest of my life. I don’t know if I should have said that, because I’ve done some work for Mercedes. I used to have a Mercedes. I’ve done some musical work for them. And I did some musical work for Lexus. I’m into the German engineering, though. The handling of the car is just fantastic.”

“It was her first day in New York City. It was my third day in New York City. And I was walking, going down to the place that used to be Augie’s-Smoke. I was with my roommate…we walked past Barnard College [at Columbia University] and there was this party going on in there. So I was like, ‘Hey, this is an all-girls school, let’s go up there. I went in and there was some food, so I sat down to eat and the party was downstairs. I’m sitting there eating and there’s this young lady sitting next to me, and I’m thinking, ‘Let me start having a conversation.’ We ended up sitting there for like an hour and a half, two hours, just talking. And when we were finished talking, I never even went to the party. Been together almost 14 years now.”

Harris is a self-described “extremely eclectic” reader. “Right now I’m reading a book called Zen and the Art of Motorcycle Maintenance. The book I read before that was Middlesex by Jeffrey Eugenides.”